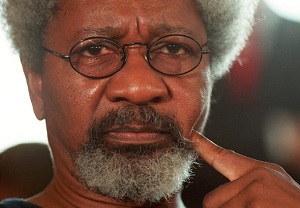 This is the title of a bold academic presentation that scrutinizes the way Africa is portrayed by some emerging African writers, and how this is different from  the portrayal of the continent  by the older generation of writers. The paper was presented at a recent international conference organized in Pretoria by the University of South Africa (Unisa). The conference, which attracted some emerging African writers from the United States, also featured an opening lecture by Wole Soyinka, Africa’s first winner of the Nobel Prize for Literature. Soyinka’s lecture, titled “The Fictioning of Africa: The children of Herodotus”, dwelt mainly on the processes by which colonial European writers fabricated and  circulated distorted accounts of what was accepted by the world for decades, even centuries, as the ‘history’ of Africa and Africans.

In his characteristic sarcasm towards old-fashioned Western attitudes, Soyinka described the various dishonest methods and motivations behind the colonial mission to portray Africans as barbaric, uncivilized and less than human. Over the past few decades, many scholars have expatiated on how these acts of deliberate misrepresentation served, among other goals, to justify Machiavellian imperialist intentions. It was also a crucial part of colonial Europe’s construction of its own supposed cultural superiority and defense of its criminal destruction of indigenous cultures and imposition of tyrannical rule across the world.

Soyinka’s lecture did not necessarily provide any major new insights into these familiar issues, but helped to recall before the capacity crowd that packed Unisa’s Function Hall out that Wednesday morning the sad fact that decades after the end of official colonialism, the ‘fictioning’ of Africa continues in new, subtle and perhaps more malicious ways. This then brings up the idea of “writing what they like”, a reference to how recent African writing may have been collaborating in current misrepresentations of Africa.

Of course, this catch-phrase is not original; it is inspired by Steve Biko’s title to the first in his famous “Frank Talk” series. It is meant to provoke a comparison between certain features of recent African writing and Biko’s celebrated audacity as a speaker and writer whose belief in the dignity of the black man was uncompromising. While Biko made his case in the political sphere, other African writers relentlessly pursued similar arguments in the domain of literature.

Es’kia Mphahlele’s 1959 childhood memoir Down Second Avenue and Chinua Achebe’s path-breaking Things Fall Apart, published in 1958, are classic examples of the effort of African writers of fiction to overturn imperialist misrepresentations of Africa. Soyinka’s 1975 play Death and the King’s Horseman, which was cited in the Nobel announcement, has also been hailed in particular for its thorough portrayal of the sophistication and complexity of indigenous African way of life.

The play, which was based on a true event in colonial Nigeria in 1946, dramatizes the vitality, rationality and authenticity of African culture and mythology. Like others of their generation and vision, these writers have greatly helped to provide the world with an understanding of African life. Interestingly, they did not present Africans as perfect and superior to other races; while validating indigenous cultures, they also gestured to their inherent weaknesses. In essence, their representation of Africa offered a credible balance of perspectives that revealed both the madness and the method of African life.

In contrast, there appears to be a growing preoccupation by some emerging African writers on the elaborate portrayal of an Africa characterized by ‘madness without method’.  More worrisome is the fact that such writings have tended to become winners of literary prizes inaugurated and situated in the Western literary establishment. Of this collection of writings and prizes, the UK-based, GBP 10,000 worth Caine Prize for African Writing, and its 2011 winning short story, “Hitting Budapest” by Zimbabwe’s NoViolet Bulawayo, seem to be most representative.

Bulawayo’s short story gives an account of a short trip by five hungry kids from a shanty town to an affluent suburb of Harare. The author uses a number of narrative techniques to foreground the realist credentials of the well-crafted story and vigorously depicts in an ‘in-your-face’ manner the abject poverty (material, cultural and social) of post-2000 Zimbabwean society through a representation of negligent parents and the thoughts and actions of the dirty, raggedly dressed children whose leader is symbolically named Bastard.

This story possesses some of the features that bloggers Aaron Brady and Matthew Chenney have identified in the majority of Caine Prize winning stories: they generally offer nothing more than the “familiar tropes” in their portrayal of “children left behind by their society, either running wild in perverse and monstrous ways (as in the child soldier narrative, in particular) or festering in horrible ignorance and social pathology”.  Nigeria-born US-based commentator Ikhide R. Ikheloa has criticized this representational paradigm as “how not to write about Africa”. These comments recall the protest by Indian-born intellectual, Mahmood Mamdani’s against the Western media’s coverage of the Darfur crisis (which he describes as “a pornography of violence”) that it depicts violence in Africa as gratuitous and intrinsic to African nature, rather than as a something whose perverseness may be understood in historical and social terms.

Ikheloa also suggests that such writing may have the direct objective of pleasing the predominantly Western readership of these writers and the judges of the Caine prize. But a delegate at the Soyinka conference thought differently. She argued that such writers may have been sucked into the vortex of sensationalism that characterizes contemporary narratives of whatever form globally – a situation in which the more graphic images are, the more appealing they are to audiences, and the better they sell. It was also considered that many emerging African writers may be conflicted by their hybrid and syncretic identities; many live in the West (in some cases grew up and hold nationalities there) and still struggle to hang on to their biological Africanness.

Whatever is responsible for the increasingly negative portrayal of Africa in its recent literature, it cannot be denied that a crucial factor is the current overdependence on publishers, readers and prizes that are predominantly Western-based and controlled. This idea is confirmed by Nigeria’s US-based award-winning author Seffi Attah, who said in 2008 that “it will be a new day for African writing when we are able to establish our own publishing industries”, and if I may add, literary prizes. Attah goes on to say this will “improve the ways in which” African writers write and the stories they tell.

Aghogho Akpome, a member of the Southern African Freelancers Association, is a PhD student at the University of Johannesburg. His research interest is in Post-colonial Studies.

Emmanuel Idem: This is What you Could be

Melony Akpoghene: Conversations with her