“Now that every state is enslaved and the rock stairs that we built crumble on our heads and the earth is mortally wounded, what use are the memorial drums?” 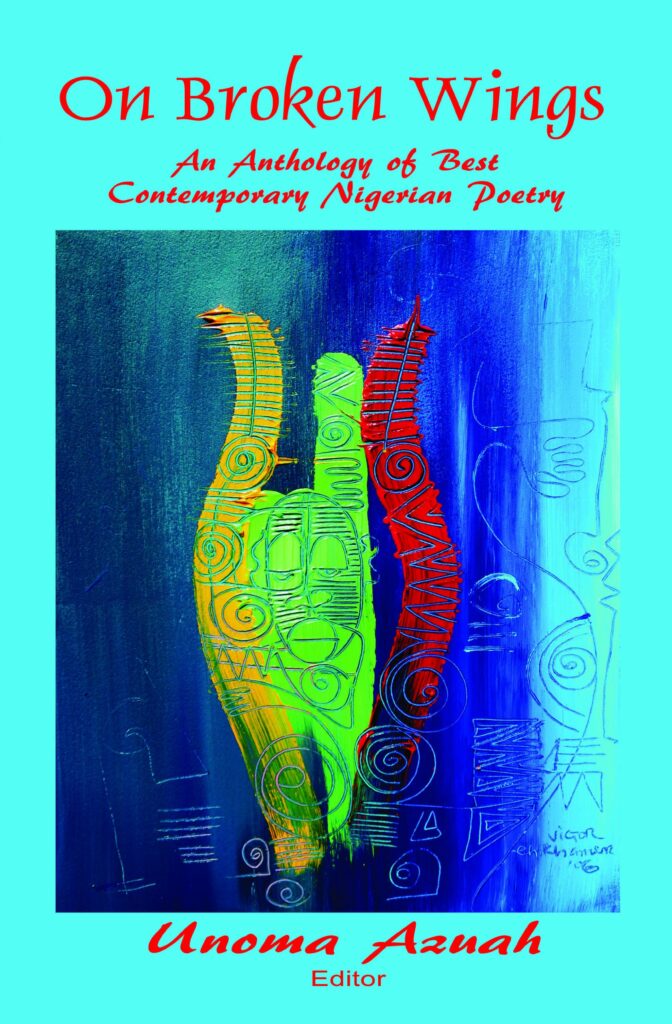 This was the opening salvo, a quotation by the late Prof. O.O. Enekwe, a renowned poet and playwright. But most of what we find in the anthology are not memorial drums but the traditional long drum grumbling with broken tongues – half of the pieces full of fire, the other half full of tears. It is a largely successful effort to break away from the yesterday of African poetry, but it is timid enough to suffer the boomerang of the echoes of African poetry inspired by the struggle for independence. A good number of the featured poets are in the Diaspora struggling to keep abreast of happenings in their homeland lest they experience the disappointment of T.S. Elliot’s Magi, who returned from visiting a new born child to a changed home and hearth. They are caught in the two worlds of the longing for home and the lure of the Diaspora. The poets are not singing perhaps out of nostalgia since they tend to look with frustrations on the home they left behind. Hence they are not prepared to return to these dead kingdoms until there is a resurrection. Victor Ehikhamenor represents this group. He is emphatic in his resolve in his Farewell: “When you unwrap our memories/eager for bright reminiscences/it will be faded like an ageing rainbow in dusk/ I have said my farewell/ and taken my rainbow elsewhere.” But did he really? This is a question to be resolved like saying no in thunder-in silence.

While the likes of Victor have made their decisions and live in their dreams fulfilled – apparently, Tony Kan is content with grumbling lamentations in When Home No Longer Feel Like Home: “We dream dreams of distant Shores/ where we lie and die in the arms of strangers” and “While the hearth grows cold/…Our eyes scour the distant horizons/ like a sad wife dreaming of what could have been.” Such flight of fancy masks the pain – and celebrated joy in escapism. But more poets, those who would not flee, stay back to “mould fresh mortars of harsh priesthood”, as Remi Raji puts it in Animus 1 – which is followed up by unconvincing rationalism: “They say that’s how great nations are born/ on the animal blood/ of dissenting brothers” a tacit acceptance of his fate under the hammer and chisel of insurgency.

The theme of gloom and discontent pervades most of the poetic strophes. Unoma herself shares the same sentiment, drifting along with the ether of split identity: “The closest thorns cut the deepest/ mosquitoes breed at my mother’s feet” in her poem Home is Where the Heart Hurts, confirming the position of Emeka Agbayi: “there are no symphonies in the air/ There are no symphonies here” in his treatise No Symphonies; or Amaechi Obumse’s Wasteland: “Here in this ruin we stand/ We tell tales of bygone days/ Circled by the debris of whirlwind” where we see echoes of the original Wasteland: “So much crowd on London bridge-so many/ I do not know death has undone so many” – a whirlwind in search of new inventions. Perhaps, like doers lament, he believes that “that evil ended, and so also may this”.

Azuah does not really set out to seek only gloom, drudgery and sulking. Dolapo Ogunwale, in The Future, went esoteric – the voice of hope relayed in the guilt of action: “Every moment/ Every moment/ adds a reward to reap or a sin to repent from/ Each moment is gone/ One by one outdone…” in contrast to Chijioke Amu-Nnadi’s Shadows of Dreams, who slips into dreams of silence and shadows. There are also diversions like Emmanuela Nduonofit’s Come Stroll a Calabash with me: “I see them spray the entire money…/ Come stroll the calabash with me/ I see them flow deep in Harmony/ Come stroll a calabash with me…”

Unoma’s choice of poems takes a cue from older anthologies, from a time when our written poetry was still on the crucible of infancy. But it dwells more on the dilemma of the ghost; Shall we to Diaspora, or shall we to home and hearth? Or the naughty boy who stood in his shoes and wondered in Scotland when he found that the ground is the same as in England. Maik Nwosu captured in Selwa: “still, the tourists hunger/they too have come a long way/and the sights and sounds alone/will no longer suffice.” But there is the next group who see only green at the other side of the fence, or the quintessential troubadour, as envisioned in Lynn Chukwura’s Identity: “I don’t contract/ to be fixed point/for anyone’s navigation.” Promise Ogochukwu’s dilemma: “Shall we turn /And walk away from ourselves.“ For those who either by choice or circumstance could not move out, like Diana-Abasi Eke, it is a song of frustration: “Stranded/We group in the dark/Uncertain of our ailments/Even more uncertain of the cure”. She is gathered in the same basket as Obumse.

There are many illustrations on the theme of the reluctant returnee and the hopeful eloper. Unoma carefully assembles the works to buttress this dilemma. But the success is history, for future generations will undoubtedly see these as the true reflections of this season of anomy. In that, the book is recommended for the new generation of readers and for schools, and should be taught with emphasis on the solution rather than the hopelessness.

The Path: by Oscar Mubila