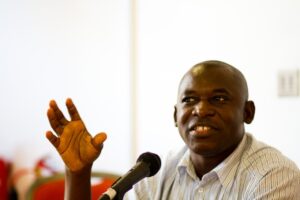 E.E. Sule is the pen-name for Dr. Sule E. Egya. He teaches Creative Writing, African Literature and Modern Literary Theory in the Department of English & Literary Studies, University of Abuja, Abuja FCT, Nigeria. He is the author of Impotent Heavens (a collection of short stories); Dream and Shame (short stories); Naked Sun (a volume of poetry); Knifing Tongues (poetry); The Writings of Zaynab Alkali (a critical book, co-authored with Umelo Ojinmah); In Their Voices and Visions: Conversations with New Nigerian Writers (a book of interviews), and What the Sea Told Me (poetry). His poems, short stories, literary and scholarly essays have appeared in journals, e-journals, anthologies and literary magazines in Nigeria, the USA, Germany, Spain, India, the UK, Senegal, etc. He has read his works to audiences both in Nigeria and abroad. In 2007, he had a nine-month writing residency in Senegal where he worked under the mentorship of the world class Ghanaian writer Ayi Kwei Armah. His maiden novel, Sterile Sky, won the 2013 Commonwealth Book Prize (Africa Region).

Sanya Osha is a philosopher, novelist and poet. In 1992, his work, eventually published as Dust, Spittle and Wind (2011), was joint-winner of the Association of Nigerian Authors’ prize for prose. His other novels are Naked Light and the Blind Eye (2010) and An Underground Colony of Summer Bees (2012), a novel about a drug subculture set in Durban, South Africa. He has also published a book of poetry, A Troubadour’s Thread (2013). Postethnophilosophy, his work of philosophy, received honorable mention in 2013 from the New York Association of African Studies (NYASA). He lives and works in Pretoria, South Africa.