In The Children Act, Ian McEwan’s subjectivity pits the secular against well-entrenched doctrinal notions in the scramble for a young man’s life. The question therefore arises as to whether to decry the unfavourable attitude of a Christian denomination (in this case, the Jehovah’s Witnesses) to blood transfusion and by so doing give a leukemia patient chances of living or uphold this tradition and allow the poor seventeen year old boy die a misguided death of faith. At the helm of this moral dilemma is tough-minded Justice Fiona Maye, before whom the hospital treating the patient is seeking an order against the church. 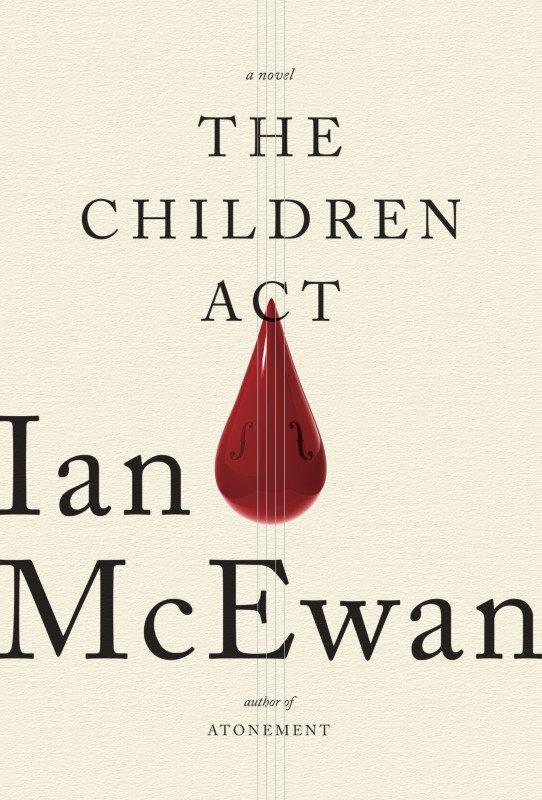 Mr. McEwan’s interests in recent times seem to have found greater expression in marrying fairly turbulent family concerns with the rigours of professional life. Saturday, his 2005 novel, is worth remembering for how past encounters in the course of duty threatens domestic peace in the life of an accomplished neurosurgeon. Fiona Maye, the protagonist of his latest novel, married to a History professor, is by no way significantly different.

As the novel opens, her private life is already falling apart. Fiona, aged fifty-nine, is pretty much preoccupied in settling heated domestic strifes in a local family court in Central London yet fails to bring order to her own marriage by denying her husband the sexual intimacy he badly craves. The passion of early adulthood still burns brightly in her husband even at his old age. Pushed to the limit of endurance, Jack blurts out during one of their confrontations: ‘you couldn’t answer my question so I’ll tell you. It’s been seven weeks and a day. Are you honestly content with that?’ This apparently gives Jack the ground of seeing another woman and so faces a crisis of confidence at home. It takes following the intricate course of the story closely to know that Fiona’s attitude is not an age-induced frigidity, as Jack might have assumed, but a bizarre sense of duty.

When it comes to blending disparate materials in contriving a plot that works, Mr. McEwan must be given enormous credit. This he achieves by telling Fiona’s own story rather subtly in the background as the blood transfusion case overwhelms the plot. Morality and, of course, misrepresentation of certain verses of the Holy Bible are central to deciding the case in question. What is at stake here is the fate of Adam, who is about to lose his sight and who is dangerously close to death having just one more day in the hospital’s estimation to avert these through blood transfusion. Fiona is convinced that the child’s wellbeing is paramount since he is yet to attain age eighteen, when he will have the legal right to make independent decisions. Prosecution attorney Mark Berner, notable for his shrewd questioning, carries this further, drawing from a 1945 committee decision of the church against members allowing blood products into their body. Rather faith healing is much advocated and any member who fails to pull through the process is instantly lionized as a martyr. However, any member who goes contrary to this creed risks expulsion from the Jehovah’s Witnesses family. It is noteworthy that what the Bible forbids is consumption of blood by eating or drinking as found in Acts 15:19-21. Berner reveals further that blood transfusion was actually acceptable among the Jehovah’s Witnesses until 1945. Interestingly, Adam’s father, while appearing before the judge, stands firmly on the side of the church and the position of its elders, refusing to back down from this unfounded belief even if this means death for his son.

The judge, apparently in a dilemma, takes a break in the middle of the proceeding to visit the hospital where Adam lies dying. Though impressionable, Adam has an incredible talent for poetry and Fiona is able to discover through lengthy but insightful conversation that he is full of life. The decision to refuse blood transfusion is his father’s and the elders’ after all; Adam has only consented for fear of rejection from the church and his family and consequently losing the love of those he has spent his entire life with. Delivering the judgment late at about 9:15pm, Fiona makes her observations known to the court, leaning primarily on a section of a legal document, The Children Act of the title to arrive at the verdict. The relevant part of the document is worth considering: ‘when a court determines any question with respect to … the upbringing of a child … the child’s welfare shall be the court’s paramount consideration.’ On this note, the hospital is granted liberty to proceed with the surgery while the wish of the church is set aside. The courtroom episode is rendered with masterful twists reminiscent of John Grisham.

Beyond the hard verdict, it seems everything is settled and nerves are at rest. Indeed, Adam is transfused and given the chance of living meaningfully again. But by the judgment, Fiona seems not to be aware of the tenebrous consequences of her action or inaction. The tearaway boy meets the judge again during the latter’s trip to Newcastle and the young man, in gratitude to the judge for saving her life with her judgment, has developed more fondness and respect for her. It is more than a mere fondness as one might think – Adam is seeking a home outside his family where true love that his family cannot offer him will be guaranteed. Incidentally, Fiona’s has been childless three decades and seems ready to give Adam’s wish a go. Few weeks later, when Adam’s leukemia comes back, he for reasons best known to him refuses to be transfused and dies. By Adam’s death, the novel gives us a surprise against expectation which is really the author’s own deft construct. Mr. McEwan, however, succours us with a profoundly rewarding tail-end where Fiona’s marriage seems doomed to crash when her jealous husband becomes aware of her relationship with Adam.

Ingenious and sublime, the language of this novel will haunt the reader for ages to come with catchphrases like ‘the infancy of old age’ and ‘…to depend on a cane with a silver head’ – the author’s worthy offering to contemporary English. ‘The Children Act’ is arguably the author’s most lucid work in recent times. Its sweeping appeal owes much to how the progress of events is achieved organically towards a poignant finish.

Ronald Adamolekun has been previously published here on Africanwriter.com, and his book reviews have appeared in publications such as Wasafiri, Gold Dust Magazine and Munyori Literary Journal.

Written by Ronald Adamolekun
Add comment
Nairobi Heat: A Juxtaposition of Race and Crime
The Hidden Life of the African Feminist