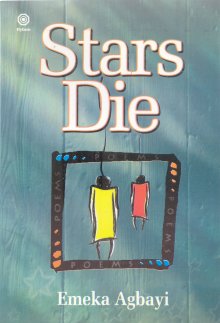 The title of Emeka Agbayi’s poetry collection, Stars Die, and the beautiful cover illustration, two hanged bodies dangling from ropes, send an unmistakable message of despair. Given the recent Nigerian history replete with mindless acts of violence, the massive pauperization of Nigerians and the virtual erosion of opportunity for creation and multiplication of beauty, there cannot have been a better choice of title and cover design. As if Nigerians had not already been humiliated well enough by the long years of harsh military experience, AIDS has launched its own scourge and aggressively munches off the already weakened will to live. In the face of all these, it would require a super human effort to still cling to hope.

Stars Die has about thirty seven poems, which are divided into five sections: Soliloquies, Nature, Love and Life, The Patriot and the Critic, and, On Death and the Dead. Attempts are made to restrict the central ideas of the poems to the above sections. But as is true of works of art, boundaries are not always sharply delineated. Poems often brim with meaning and in so doing defy even the space allotted to them by the poet. The title poem, ‘Stars Die,’ (69) exploits the well known idea: ‘low-mass stars die quietly, while high-mass stars die in tremendous explosions (NASA Website)’ pure natural occurrence, to draw attention to our vulnerability as humans. Whether we make much noise at our death or just extinguish in darkness, fact is that we ‘die too’ (69).

Perhaps some readers might wonder where that knowledge takes us. If poetry is out there just to rephrase a well-know fact, of what use is it then? In ‘Two Lines For Love,’ the persona makes bland statements:

When my presence no longer evokes excitement

This, of course, is not symptomatic of the entire collection. ‘Sing to me of Stars’ to me allows us a greater space to have a peek at the poet’s talent. He begins to communicate, and in doing so begins to relate. He gives his poem measured beats that confer on it the old and much revered element of ritual, music.

Sing to me of stars and meteor

Sing to me of the sun and the moon

Sing to me of joyful children

Of the sparkle in their eyes

The love in their hearts

Only in these is innocence left. (36)

Of course the poet does not champion modernist art for art’s sake dogma. The beauty and relevance of this stanza shines against the background of the dire human conditions

already established in the preceding stanzas. Thus it would appear that the poet believes that it is our dedication to beauty that will ultimately salvage our humanity.

The poems are, like ninety-nine percent of Nigerian poetry doggedly lyrical. They ultimately share a common weakness of our generation of Nigerian poets as has been pointed out by Obasanke Lasanke in his beautiful essay ‘The Failings of Contemporary Nigerian Poetry.’ Agbayi can be excessively lyrical and annoyingly romantic:

echo and re-echo in my head.

I explode into laughter too.

Sighs of the wind,

whisper sad memories to my ears.

Tears roll down my cheeks. (Madness, 33)

But his spontaneous observations of nature can be refreshing and rewarding. To me, however, the collection is overtly depressing. Perhaps it is meant to be so as most Jeremiads are. While I understand the tendency to sing dirges to the decaying country, I would rather appreciate a poet who draws our attention to the bright speck of hope in the overwhelming darkness of our humanity, and who does so in the most realistic form possible. Emeka Agbayi seems to be prepared to do exactly that especially in the last of the poems, ‘I Shall Return,’ which ends with the images of ‘flowers’ blossoming. The poem allows us to hope that this fine talent will not wilt in mind-crippling lamentations.

The Wind has Multiple Wings: Poems by Adeola Ikuomola

It is not for everybody: Poems by Chinua Ezenwa-Ohaeto

Abubakar Gimba and the Literary Excursions in Niger State

Paul Liam
We use cookies to ensure that we give you the best experience on our website. If you continue to use this site we will assume that you are okay with it.Ok