Much has been made about recent statements ascribed to Zimbabwean writer Petina Gappah, in which she expressed unease at being called an African writer. She was particularly irritated that her own book blurb called her the voice of Zimbabwe. First of all, I think it is presumptuous for anyone to call Gappah the voice of Zimbabwe and she is absolutely right to reject such a burden. She also has a right to protest whatever label anyone stamps on her. I am not so sure however, what the problem is this time, except that the question that elicited her response was an incurious one. It was a silly question: What was the problem that the interviewer was trying to solve? Other than that, I regard Petina Gappah as an African writer and a fine one at that.

I have absolutely no problem with the term, “African writer,” I am an African writer. Everything depends on context. And it is true that we are the sum of our experience and folks are right to protest any definition that in their view limits the range of their identity and their life’s work. But I do think Gappah protests too much this time. Prejudice is one thing, but the consumer, that is, the reader has a right to see Gappah the way she presents herself. If you don’t want to be called an African writer, well, don’t be one.  Case in point: In November 2009, Gappah was a willing participant in “African Literature Week” in Oslo. All the writers invited to the event were “Africans. “African Literature Week” was supported by the Norwegian Ministry of Foreign Affairs. From all indications, these African writers had a great and memorable time, and I don’t recall that anyone ever protested the stereotyping or pigeon-holing that this event could possibly represent. I don’t know what people do at these events, how people are chosen to represent “African writing,” etc, but given the stridency of African writers like Adichie and Gappah in complaining about the West’s tendency to stereotype “Africans”, and focus on “single stories”, etc, it seems to me that they are quite simply guilty of eating their cake and demanding it back.

I detect this chic superciliousness, our writers coolly biting the Western fingers that feed them daily. I am not prescribing obsequiousness, I am simply saying, show some respect. The truth is that, largely due to the circumstances Africa finds itself, most of our (African) writing is very limited in range. Read our African writers, close your eyes and recall the themes in their books. They are for the most part predictable and focused on the single story. This is not necessarily a bad thing but the consumer is not to be blamed for identifying the writer with his or her own label. Our actions and words taunt our stated convictions. Word to the African writer: If you are unhappy about the label, “African writer,” stop applying for these grants that are targeted at “African writers,” stop writing to the test of all those Western prizes dedicated to the preservation of  “African writing.” Stop attending conferences on “African literature” facilitated by the kinds of patronizing, condescending white professors that live in Adichie’s stories. Stop publishing your works on websites that are dedicated solely to “African writing.” If you want to be known as a worldly renaissance writer, write about your real life in Europe or America, don’t worry about Africa. 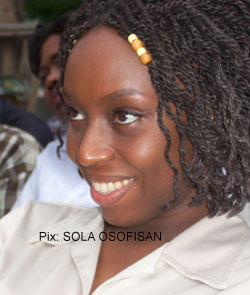 Our rage is misplaced; all over Africa our political and intellectual leaders are hard at work trying to convince the world that we are sub-humans. Yet, when we are called sub-humans, we wail foul. It was not white folks that sent us packing into the cold fields of exile.  Put another way, it was white folks that fixed our broken bones, found us a roof and gave us back our (formerly) broken voices. We should be grateful. I know this is not the politically correct thing to say. Who cares?

I think that our writers are obsessing about the symptoms, instead of focusing on the central issue. Again, it is all about context. Is Professor Chinua Achebe an African writer? Yes. Is the book Things Fall Apart an African novel? It is more than merely an African novel. A Western professor once in my presence hailed Things Fall Apart as the great African novel. He probably meant it as a compliment, but I thought he chose his words carefully. Things Fall Apart is a great novel, no ifs, no buts about it. This is one instance in which those who see the exotic in us do not share in the expression of our humanity.

Lastly, perhaps, as a people, we are the conquered and we know it but we are not taking it very well. It is humiliating I think to be the conquered, to be the one struggling to mimic alien accents, enjoy their wines, marry the other, etc. I take a more charitable view of our circumstances. There is no conquest per se: The world is browning. That pretty much sums it all. Chew on that.

Mentoring as a Strategy for Excellent Creative Writing: Perspectives on the Hill-Top Art Centre, Minna, Nigeria

The Subversive Immanence of the African Underwear 2020: Fiction by Jorim Alosa