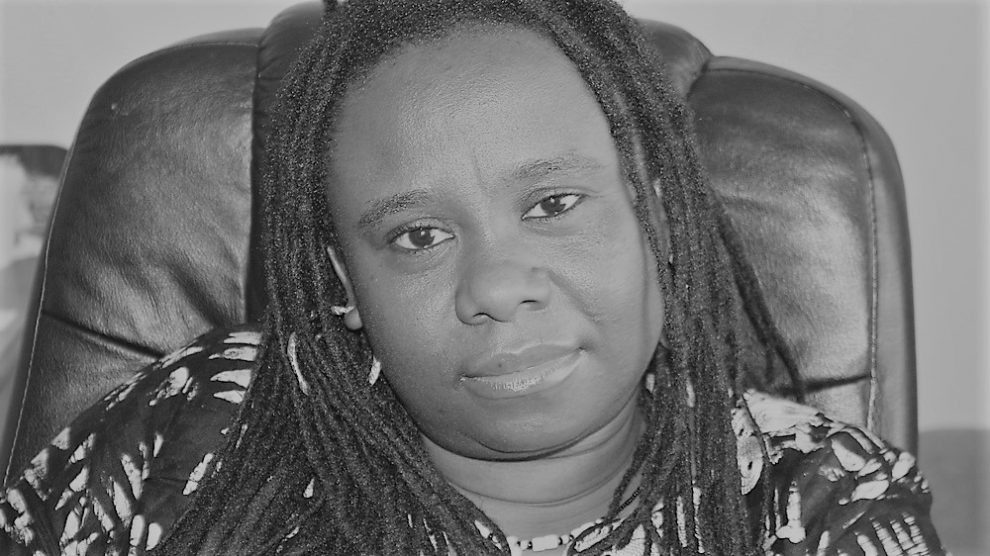 It takes tremendous courage for a Nigerian woman to engage in an open love affair with another woman. The act of damning all consequences to write about lesbian love, even in fiction, is almost always coded. Unoma Azuah shatters the glass ceiling as it were by telling her story of growing up a lesbian in conservative Nigeria, a memoir like no other. It is a grand human story that casts aside all shadows. Unoma’s Embracing My Shadow remarkably sets up a scenic Garden of Eden in Nsukka where the sin is however between girl and girl, to wit, Unoma and her lover named Star, with the snake as the twist to the tale like in the book of Genesis in The Bible.

Unoma delves into her somewhat problematic parentage of a Tiv soldier father and an Igbo teacher mother forged in the throes and tragedy of the Nigeria-Biafra war. Unoma gives voice to her mother’s traumatic experiences with Nigerian soldiers in the war. According to Unoma, “I was terrified by my mother’s story, and I felt ‘dirty’ about being birthed at that time and with an enemy soldier, even though my father saved my mother’s family. The war, her story, always made me conflicted, as if there were two people that didn’t belong together living inside my being. My parents, a union that morphed into a monster that lived inside of me: a lesbian. I bore my double consciousness like the mark of the beast: a burden I often wished I could strip away. I wanted to be one: one person, from one ethnic group, whole, straight, like everybody else.”

The family lived in diverse places especially in the old Midwest Region or Bendel State, notably in the towns of Ekpoma, Auchi, Uromi, Yauri and Umunede. It was in Umunede that Unoma’s soldier father died while she was aged six and her brother Ugonna was only one year old. 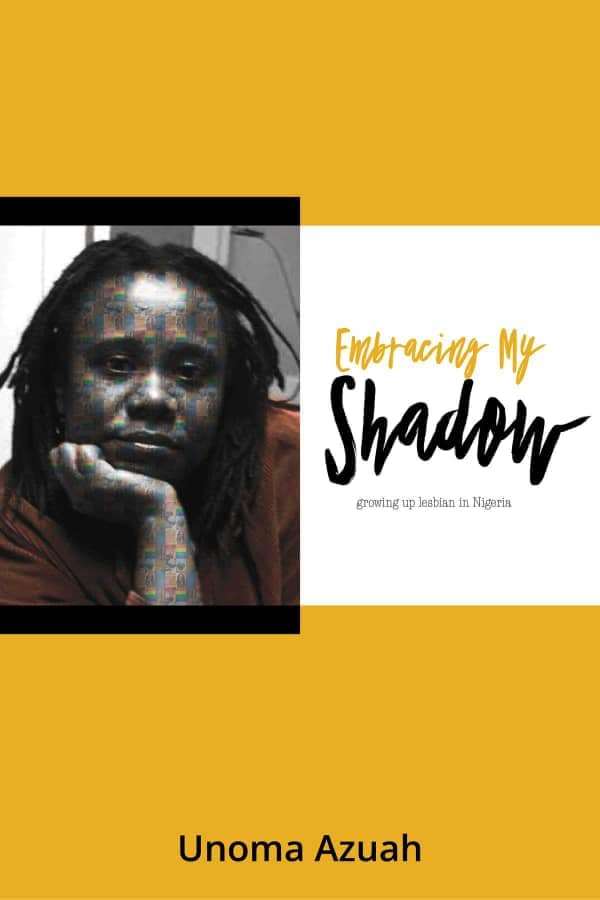 Sex was an early ordeal, as Unoma writes: “At Umunede, the kids I played with were mostly boys. I couldn’t relate much to them except that I always wanted to play with them. The oldest of them all was Ezekiel. He was fourteen. I was six. We used to play a horse-riding game. Some of our neighbors would see us playing. They wouldn’t say anything, so I thought nothing of it. We took turns to be on our knees like a horse, and then one person would mount and ride away in an imaginary way. But the fourteen-year-old boy would try to poke his penis inside me, and I would ask him to stop. He would stop, but then he would lure me to an isolated storage space a few blocks away from our house. It was where Igbo traders stored their bags of garri. There, he would lift me and place me on top of one of the garri bags and then hump away.”

Unoma’s life upped an ante in Idu village where her mother served as a teacher. She was bold enough to tell her fellow pupils: “I would like to study sociology or psychology at the university.” This earned her the nickname “Unono ology”. Unoma’s arrival at puberty was a shocker she was not prepared for. Her mother wrapped an old cloth between her legs and thighs while saying: “My little girl has become a woman.” Thence came the motherly advice: “Now you must really stop playing with boys!”

It was when she moved to Nsukka – first at the University of Nigeria primary school, and then at the Queen of the Rosary secondary – that the matter of her sexuality soared into controversial heights. She loved the girl Ihu and made to kiss her only to be pushed off gently with the words: “I am sorry, but I am not a lesbian!” Unoma’s attraction to her senior Ano attracted this rebuff: “Who will help me deal with this puppy, this little lesbian that keeps following me around like a stray dog?”

Then she met the girl Star and they hit it off thusly: “When I first met Star and had a crush on her, I was eager to explore my attraction to her. She made me feel comfortable with discovering parts of my body that lit up at her touch. She taught me that it was okay to express my feelings. If I was hesitant about kissing her, she’d cup my cheeks in her hands and kiss me deeply. I learned how to respond and kiss back. She opened me up to love. Though she was a year my senior, it didn’t matter to me that she was older.”

Unoma was a tormented soul who kept scribbling “Questions for God.” She was lured to a Night Vigil where the presiding Pastor assailed her with the words: “There is somebody here who likes girls, the way a boy should love a girl. She has a weakness for women. She is possessed.” No extent of torture or humiliation would make her change her ways.

Unoma persevered in her quest for love until she met Chinelo, to whom Embracing My Shadow is dedicated. She tossed a note to the beautiful girl whom she fondly called Nelo thus: “I like you, but I am not a lesbian.” Both fun girls would say the rosary and then go ahead frolicking.

Unoma writes: “I needed the prayers, any prayers that would save me from the tumultuous wallops of my heart. My whole body responded to her, and it was scary; something I couldn’t explain. My attraction to her was intense. She was so beautiful and I couldn’t believe that my fantasy of her wanting me as much as I wanted her was possible. I wanted to take her and put her inside of me: safe and secure. Out of impulse, I lay on her thigh, and it felt like cushions of clouds, cradling and warm. Warmth seemed to rise from her and seep into my cold chest and my whole body. This felt like home. This was where I belonged.”

When she was admitted into the University of Nigeria, Nsukka in 1988 she was encouraged by her friends to forget her lesbian past and try out with boys but it turned out a disaster because a boy’s kisses could not spark the feelings such as Nelo’s and Star’s. Unoma tells it all as it is, hiding nothing: “I needed to masturbate. My roommate was there, and the toilet was too repulsive. It reeked of stale shit and was littered with maggots and chunks of dried feces. I couldn’t use it. I wanted to run out into the open fields and scream until I passed out. I was so randy I could have stuffed any woman’s fingers or tongue up my vagina.”

After graduation and doing her one-year national service, she was home to Asaba only for her mother to tell her: “Go and marry or find a job!” She set off for the bright lights of the big city of Lagos on a friend’s invitation. She met the wealthy Nelly who had a husband but wanted Unoma to be her pet. While they were in Nelly’s home her husband who was supposed to have travelled suddenly arrived. Unoma hid under the bed while husband and wife made love on the bed. Unoma peed on herself and eventually fled with this lamentation: “I knew Nelly was married, but that notion seemed so distant because I never met her husband. I was humiliated to the point of self-spite. I hated myself and loathed her even more for putting me in a position to be treated as less than an animal. Maybe we both were at fault, but I was done.”

Unomah’s writing of the first lesbian title essay published in the Vanguard newspaper entitled “The Emerging Lesbian Voice in Nigerian Feminist Literature” met with what she tagged as a “blistering response from Kalu, who was a schoolmate from UNN and at that time was a journalist in Lagos.” Kalu’s attack, in Unoma’s words “became the beginning of my nightmares in Lagos.”

The camaraderie within the Association of Nigerian Authors (ANA) somewhat provided succor for Unoma thus: “With freelance jobs, I was able to sustain myself and throw my whole weight into my job as the assistant secretary for ANA. For days, when I needed to do my ANA duties, Mr. Bajo was always supportive with money and meals. The whole ANA clan that included Anke of the Goethe Institute, Ogaga, Odia, Lola, Akachi, Angela, Maik, Otiono, Toni, Nike, Funmi, Lookman, Raji, Pius, Chiedu, Sanya, Lasisi, Jahman, Promise, Maik, Lynn, Akin, Kole, EC, Mike, Maxim, Akachi, Mobolaji, Toyin, Omowunmi, and many others, seemed to always huddle together for a variety of literary and art events in Lagos and Ibadan.”

The Vanguard journalist Obi did so much to help Unoma. Upon a frightful homophobic attack in Lagos she made a frantic call to Leslye Huff who secured “a scholarship for a Master’s program in English in Ohio for me.” So off to the USA Unoma went, and this book is her song, her story.

Unoma Azuah has written a bold book in Embracing My Shadow, the acclaimed “first Nigerian lesbian memoir”. She writes with deep conviction and adroitly makes rounded even her male characters such as the French teacher Monsieur who attempted to rape her, the sex predator Professor Nkwo, and her Hausa lover Umar who wanted sex but only got blow jobs. She brings sublimity to bear on weighty issues like her rejection by her father’s family and her sexuality. In all, this is a book that earns her a place in the annals of Father Time.

Embracing My Shadow by Unoma Azuah is indeed a breakthrough book that should compel many LGBTQI Nigerians to step out of the shadows.

After Coming Out After A Long Depression: Poetry by Abigail George

To Precious, My Oxygen: Poems by Victor Eyo