For the Love of Flight is Lola Shoneyin’s third collection of poems and it goes a long way in cementing what is, already, a well deserved reputation as an important literary voice and poet who also happens to write fiction and children’s stories. She also remains the most prolific female Nigerian poet working now or at any other time in the history of Nigerian literature.

The collection extends what is a trademark confident, sure footedness, underlined by and reflected in poetry that is at once sassy, saucy, engaging, literary and also wickedly playful. Her style can be both lyrically evocative and also stinging, laced with acerbic barbs that draw blood. 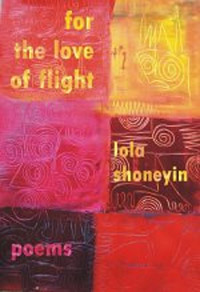 Beginning in 1998 with “So, All This Time I Was Sitting On an Egg,” Lola served literary notice that she was not a poet to be glossed over, another female poet producing “well behaved” and politically correct poetry. Her poems were going to be loud and sassy and politically incorrect. She was going to tackle issues that evince a deeply reflective nature as well as a public engagement and concern with issues that are fiercely and unapologetically feminist.

The journey progressed with the publication in 2002 of her sophomore effort “Song of a Riverbird” but it is in “For Love of Flight” that she attains a higher measure of literary maturity that helps extend her poetic range. The poems in this collection, while focusing and continuing with her basic concerns are more measured and more lyrical. They are also less strident and overtly, for want of a better word, aggressive.

But this does not mean that age has mellowed Lola Shoneyin’s fiercely independent and critical streak. Her poetry still packs a massive punch especially in the overtly political poems in the last section of the book, “No Roost for the Wicked,” but it is also in those poems that we find the weakest (and also most recent) in the collection because in writing poems of a very public and politically topical nature, Lola sacrifices art for message.

Reading Lola Shoneyin’s poetry presents a literary dilemma especially in the deeply reflective personal poems, those collected in the early sections of the book, “Nesting” and “The Beak Generation.” As you read the poems, the question persists seeking an elusive answer, whose voice are we hearing? Is the poet persona Lola Shoneyin; poet, mother, wife and teacher  or a literary doppelganger, an invention set forth on paper to mess with our minds?

Some of the poems are easy to decipher as they detail extremely personal incidents, family milestones if you wish, in Lola Shoneyin’s interesting life; the morning after a birth in “Bath Day,” a tender moment between mother and son in “The Head Story” where the son says to her “how great it would have been/if he had grown out of my head, like an ear;” honeymoon in Minnesota in a poem of the same title and the quietly menacing “Intruder.”

There is also, what I regard as the standout poem of the collection, For Kiitan, a painfully, evocative narrative poem recalling the loss of an unborn child. The sad news is communicated without words by a young doctor who is flummoxed by the discovery made during a routine examination.

“The young doctor smears the gel belly-down
I spot the tension in her wrinkled brow.
Is anything wrong? I ask”
And there is indeed plenty wrong because another doctor soon arrives to deliver the shocking news:
“Soon, another doctor marches in
She prods my prince’s imperfections
And tells me that his nerves will never ripen
And that his brain is shriveled like a rotten nut.
I fall to the floor
Like an over-beaten mat.”

Reading “For Kiitan” is akin to watching a woman undress and lay herself bare, but there is nothing sexual or physical, it is rather a psychic unraveling; a true spontaneous overflow of powerful emotions recollected in  tranquility and set down in lyrically evocative verse.

At the end, after labour is induced and the child is expelled out of the womb before his time, we read:

“Let him be enthroned in a crystal jar,
To be observed and revered like a fallen star.”

Toni Morrison, who has written extensively and with keen psychological insight  about motherhood and sacrificial love wrote in Sula that when it comes to a mother and her children, there is no thin love. To quote her, “Love is or love aint. Thin love aint love at all.” You get the sense of Morrison’s meaning when you read ‘Jolademi,” clearly the second stand out poem in the collection.

It is an ambiguous and disturbing poem that focuses on motherhood and motherly love and one that recalls parts of Morrison’s Sula, especially Eva’s relationship with her son, Plum, the one she sets on fire to save him from himself.

Lola Shoneyin writes.
“It has been four years now since I spat him
From a lip in my womb
Yet every night, he wants to crawl in.”
The clingy child and the loving mother are so enamored of each other that we read:
“God, if I could birth this boy again,
I would.”

There are other disturbing poems with hints of the dark and noirish undertones as in “The Lost Daughter,” “Adulteress” and  “Mother Full of Pride” where we read:

Lay you finger upon my lips, mother.
Feel the blood deep bruises,
Glossed over with purple….
Where were you when he widened my mouth
With his tongue and spat down my throat,
Licked my ears and made me promise not to tell?”

And this, again, is where the dilemma presents itself; whose voice are we reading? The voice of the poet who has acknowledged her parents, thanking them for their unwavering support or that of her literary other self?

Other poems help in extending the question of the literary voice. These are poems like “Split Reed at Water Front” with the sexual encounter on the beach as in “the quiet rustlings of ruffled lace?” “Cannibal,”  “Out of Tune,”  “Fancy” and “Charm” as well as the sexually charged and sweetly illicit “Distance” where we read:

“I flatter the guests
Fret about the salt in the stew.
My husband will not look at me.
He knows, he knows it’s you.”

Lola Shoneyin’s poetry evinces the makings of a sensitive and accomplished poet who tackles serious domestic and issues of the day with literary aplomb. Her subjects can  be both deeply and intensely personal and at the same time political as in “Out of Tune” where a fledgling lover’s spat provides the basis for political commentary :

“We were scatting along fine
‘til things stalled in mid-session….
Then later on the sofa, we talk biology:
How what the gut rejects
Will burst from the mouth.
Politics: how what creeps into the north
Will ravage the south
…and the hopeless state of our union.”
Never has the word “union” been put to such devastatingly personal and public use.

What emerges is the sense that with Lola Shoneyin’s deft handling of even the most challenging subject matter, the lines between the personal and the pubic are left blurry because her examination of deeply personal issues can resonate all too easily with universal echoes.

The poems in the last section “No Roost for the Wicked” as we pointed out earlier are some of the most recent and least accomplished and it is easy to see why because despite the effort to hide identities through clever anagrams and names that are not mentioned, the dramatis personae are easily identifiable.

Lola Shoneyin’s angst is both political and religious and she is almost quixotic in her literary exertions. In “Opium”, she writes:

Bola Ige, Olusegun Obasanjo, the missing Musa Umaru Yar’adua as well as the dueling matadors of Ekiti all make cameo appearances. Lola’s wit is cutting and sarcasm drips from poems like “Big Love’ where she writes:

“There was once a king
Who ruled with a knife
He lusted and lay
With his own son’s wife.”

Sentimental attachment to Bola Ige leads somewhat to hagiography in the ironically titled “History” where we read about Bola Ige:

“Yes, yes! Never knew a more cultured guy.
He swirled the truth around his mouth
And blew it straight into government lungs,
Like cigarette smoke.”

And the question asserts itself; man of culture yes, but was he really a role model with his family life and all? And as a career politician, was he not part of the system that brought the rot?

Editorial sloppiness slips into an otherwise stand out collection published by Cassava Republic where “my” is misspelt as “by” and “dessert” as “desert” on pages 37 and 38 respectively.

Aside from those, Lola Shoneyin proves with this new collection and with unequivocal conviction too, that she is not just a shock jock but a sensitive poet with a mastery of  her craft.

Toni Kan Onwordi holds both a B.A. and M.A. English (Literature) degrees from the Universities of Jos and Lagos. His works have been published widely in the Art pages of prominent Nigerian newspapers and his poems have appeared in the anthology 25 New Nigerian Poets edited by Toyin Adewale. He has also had short stories published in anthologies like We-Men, Little Drops (1) and Diamond and Ashes. An award winning poet, essayist and short story writer, his awards have taken him to Scotland and Switzerland. Toni Kan is currently working on a novel, Secrets of the Untold.

Nigeria: Past, Present and Future

Written by Toni Kan Onwordi
9 comments
A Message at Sea: by Seotsa ‘Soh’ Manyeli
A Review of Sanya Osha’s ‘Naked Light and the Blind Eye’