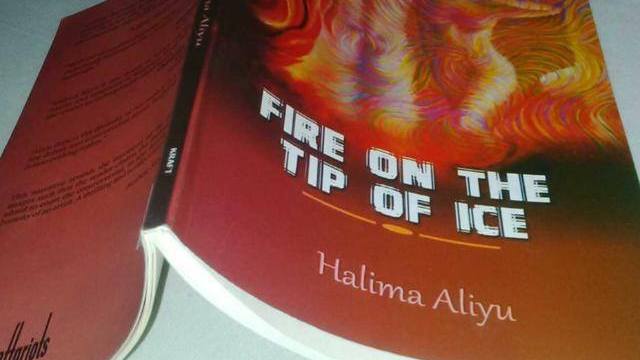 Book Title: Fire on the Tip of Ice

Short stories present to us the pieces of our lives in one single breathe. They illuminate our understanding of ourselves and illustrate the intricacies of existence and survival. They re-enact before our very eyes on the pages of paper, our struggles for meaning in a world riddled with derisive metaphors that sometimes make us want to cry, and other times they influence our reflections on the paradox of life. Halima Aliyu’s ‘Fire on the Tip of Ice’ is a collection of short-short stories that present portraiture of human hunt for existential gratification. In Aliyu’s stories we encounter a recount of us, our desires for love, peace, happiness, sexual pleasure, and above all the search for purpose and meaning. The pieces are the metaphors of life-our lives. The characters and events are faced with the same challenges, desires and aspirations as us in the real world. In her characters we see us and our daily problems.

‘Fire on the Tip of Ice’ is a collection of nine stories told with a feminine elegance and while their cadence attempts to be neutral, they are, however, betrayed by the sentiment and feministic undertone of the portrayal of struggling female characters depicted as being selfless and perhaps the most important pillars of the society. In fact the female gender is shown as the source of life by the affection and nurturing of young ones, as if to say the only thing a woman is good at is giving care. For instance we are informed in ‘Irora’ that Adeola had right from time decided on becoming a professional housewife like her mother. This is what the narrator tells us of Adeola’s aspirations;

By the time she wrote her last paper in the Secondary School Leaving Certificate Examination, she already knew she wanted to become a housewife, like her mother. She planned on staying at home and raising her children. (p.13)

Perhaps Adeola’s ambition is conditioned by the parochial society she lives in that makes mothering seem like a profession or job to many young girls who ordinarily should aspire for a higher education and well paid career and become a different kind of force in the society. Aliyu’s portrayal is questioning our values and how such values influence the decision of others. But of course, Adeola ends up realising that marriage is not a career but just a necessary part of living.

Adeola is confronted with the obstacle of a cheating and uncaring husband whom she despises but still manages to live with. She transfers her hatred of Bisi to her innocent child, Titi. The frustration and challenges faced by the young nursing mother is well registered in the story. While Adeola stays awake all night tending to Titi’s endless needs, Bisi snores away the night unconcerned with the happenings around him. For the first time, Adeola smiles as she watches Bisi who is a soldier go away for a six month assignment. Ordinarily, no woman would be happy to see her husband go away for such a long time, but to Adeola, Bisi’s long absence makes no difference. In truth, he had never really been there for her even when his presence most mattered. The narrator informs us that,

The day Adeola put to bed, Bisi was in town. He, however, did not follow her to the hospital, as it was difficult to (reach) him on his mobile. She had tried his number several times before giving up and going to wake Mama Caro. That was not the first time that he had been absent on occasions when she needed him. (P.13-14)

In the title story ‘Fire on the Tip of Ice’ we meet Amina the wife of Alhaji, and her chance meeting with a Dentist, who rescues her from a situation at union roundabout and whom she eventually lusts after. Amina is sexually deprived by Alhaji who hardly satisfies her, even when he finally finds the time to make love to her. She desires more than what Alhaji offers but is afraid to complain, so he doesn’t feel insulted by her assessment of his performance in bed. And yet again, the vow of marriage forbids her from seeking the comfort of another man. She ends up masturbating and living in misery. Also, Amina transfers her aggression to her only son and often hits him for little wrongs that she could have mildly scolded him with words. One would wonder how a mother would find the willpower to maltreat her own son because of the shortcomings of his father. Although it is difficult to believe it, we see it in the character of Amina, and one can only empathise with her over her condition.

Sexual deprivation as can be seen in the character of Amina, is perhaps the worst nightmare of a married partner as it could lead to extra-marital affairs that could in turn break the home and worse still, result to psychological complications for the deprived partner such as in the case of Amina.

It happened in a rush; as it always did. Amina had barely prepared herself when Alhaji slid into her. Then he began to move his bulky frame, with obvious effort. She closed her eyes, trying hard to breathe under the weight of his body. And then, it was over. (p.30)

The above passage describes the mating routine between Amina and Alhaji. We feel the pain of the protagonist. Alhaji is portrayed as an insensitive and docile man who cares less whether his wife is sexually satisfied or not, so long as his own needs are met. What is Amina supposed to do with a situation as precarious as the one before her?

There are psychologically stirring stories in the collection such as ‘Take a Step’ and ‘Soiled.’ The psychological and emotional stimulation makes them stand out in the collection as every critical reader’s favourite both in terms of craft and the depth of thematic manipulation. Suspense is better handled, the interaction between the characters is well handled and for once the reader confronts really thought-provoking and emotionally draining thematic engagements.

It is intriguing to read a baby narrate the ordeal of his mother, as she fears that he may never walk. The storyline is simple but classic; Mama’s only son, Junior, in ‘Take a Step’ is due to walk but he still hasn’t started walking and it worries Mama that her only child may never be able to walk. This fear makes her grieve all the time and she employs the use of a walking tricycle with which she tries to teach Junior how to walk. The irony that makes this story exceptional is the simple fact that the story is narrated by the baby (Junior) and unknown to his mother it is his deliberate decision not to walk. He fears the danger in the world and therefore prefers to remain a baby forever in order to avoid the ordeal of the adult world. Junior changes his mind after only listening to Mama and Mrs. Taju’s conversation that he may become a ‘cripple’. Junior walks finally after much effort. He decides it is time for him to walk to avoid becoming a cripple and who can explain the joy of a mother on seeing her child take the first step of his life? None can.

Junior explains the last moment of joy as he takes the first steps of his life: “the next thing I knew, I was in Mama’s arms and she was laughing and crying and kissing me at the same time. “Oh Junior, you can walk. You can walk. You can walk…’” The suspense and humour in the story is really gripping. An emotional reader might cry while reading this particular story.

‘Soiled’ is another well-crafted piece in the collection (it is available on this website). It engages the contemporary issues of homosexuality and rape in a different sense than the terms are mostly associated with. ‘Soiled’ is the story of a school boy known as Richard who is perpetually raped by a group of Senior Prefects who molest him every night and day. This homosexual assault perpetuated against him traumatises him as he is regarded as a timid and retarded recluse who is also the subject of bullying by many, especially Joel who saddles him with the duties of taking care of his homework. Unfortunately for Joel, Richard would end up using him as bait to catch his assaulters as he stays out late on Richard’s bed one night copying an assignment and eventually falls asleep. Well, Richard succeeds in unravelling his predators. He finds out that Senior James and other seniors were his assaulters when he switched on the light and caught them ripping Joel’s anus apart.

The story shows us that strength is found even in meekness and that every evil act has its last day. The manifestation of Richard’s action is nicely done especially because one does not expect Richard to be that clever in finding out the identities of his rapists. It is encouraging that Aliyu wrote this unique story, a deviation from her overtly feministic inclination. The themes in ‘Take a step’ and ‘Soiled’ are refreshingly intriguing as they mark the crux of Aliyu’s narrative ingenuity. The elements of storytelling are most prominent and more effectively employed in these two stories.

Finally, the nine stories in the collection ‘Fire on the Tip of Ice’ are a reflection of our collective and individual struggle for purpose and meaning in life; the little metaphors of life that make existing both challenging and exciting. However, there are issues with many of the stories. In many instances the stories are not properly developed, which leaves the reader wondering at the end what a particular story was intended to achieve. The ending of many of the stories leaves little to be thankful for. In some of the stories the plots do not connect and are often not fully developed. The author might want to bank on the illusion of creating suspense with such abrupt endings, but it makes it more complicated, as in any case a story has to be properly developed. In other instances, the conflicts are lame and not emotionally stirring except in ‘Take a Step’ and ‘Soiled,’ where one enjoys quite an impeccable presentation. A successful story should be able to stir its reader and incite genuine reflections. Above all, Aliyu’s collection is ready for all who love little things that are everything. Pick a copy and read.

The Eagle: A Short Story by Temitayo Olofinlua