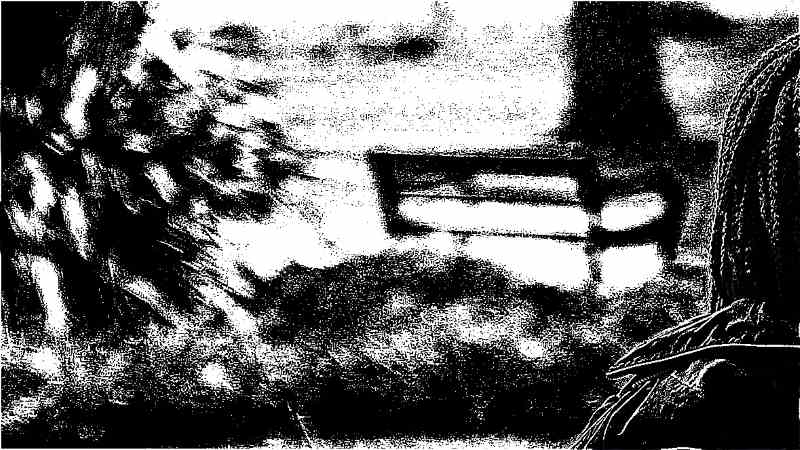 Isa sat down and watched as his wife placed the plate of Jollof rice and chicken on the table. She must have killed the last chicken they had. The last time they killed one was during Easter, and now that Christmas was in the air, they killed the last one. His wife placed the fifty-naira coke on the table beside the food and a plastic spoon and fork.

‘Eat,’ she said quietly and went to sit opposite Isa at the wooden dining table.

Isa’s eyes were not on the food or the coke. His eyes followed the housefly that was flying stealthily to perch on the chicken. Isa did not wave his hand to send it away. He did not even blow air to chase the little monster. He merely watched as the fly flew around and later perched on the chicken. Isa’s wife quickly waved her hand over his food and sent it away. Isa wished she hadn’t.

‘Eat, sweetheart,’ she said. Isa looked at her as she swallowed a spoonful of the orange rice as though she was forcing herself to do so.

‘Eat, sweetheart,’ she repeated. Sweetheart? Isa thought. What was sweet about his heart at the moment? If there was any word he could use to describe what his heart, it was not ‘sweet.’ He would rather go for ‘bitter.’ He looked at the food, and felt nauseated. He could not bring himself to eat; not when they were only two at the table, a table meant for four.

‘Why are you not eating?’

Isa looked up at her and hot tears streamed down his rough face. He had aged unnaturally within the last sixteen months.

‘Don’t do that. Today is Christmas,’ she said slowly. She too was fighting back the tears.

‘Christmas? Did you – say – Christmas?’ Isa sobbed. He did not wipe away the tears. He let them roll down to his beard. ‘Two of us are sitting down here without our daughters and you say Christmas?’

Isa’s wife’s lips were trembling. She was about to collapse under the heavy weight of grief.

‘Same…same thing hap-pen-ed la-st-year…when will we ce-le-bra-te Chris-tmas with Nana and Tabitha? When?’ He burst into tears and dropped his head on the table, pushing the food down to the floor. His wife got up and crouched beside him, patting him.

‘Since – last – year,’ he stuttered. ‘Since last year I haven’t set my eyes on my daughters and -you tell- me to ce-le-bra-te Christmas? I don’t even know where they are now. I don’t know whether they are being roasted as Christmas chicken in Sambisa or they are in another man’s land, cooking him chicken,’ he sniffed.

The tears came in waves and swallowed the two of them. Isa wept like a nursery school student who had just been told there was school on Saturday. Tabitha and Nana were his only daughters. How was he to be sure they were still alive? Would it not be better to know whether your child was dead or not, than for you to be left ignorant of what was happening to her and where she was?

‘I know… I know, but what if…what if they have been tampered with? What if…?’ He asked in a brittle voice looking at his wife. She shook her head slowly and wept even more, collapsing to the floor. There had been many stories about all the girls that had been kidnapped being used as sex slaves and for all sort of brutal things. Isa did not, could not imagine his Nana and Tabitha being raped by a terrorist; they would die.

‘Then why? Why do I have to send my children to school if I know they will not return?’ He said with trembling lips, banging his hands softly on the table. The coke bottle fell and the drink spilled. The liquid was like old blood, like the blood that came out of a sexually immature girl who had been deflowered, who had just been raped. Isa imagined his daughters bleeding as the men raped them, as they tortured them, their blood left to dry in the tropical heat. He wept.

What was the point in sending one’s child to school if one would not be able to sit back, rest assured that the child would return at the appointed time? What? He still remembered how it happened that day. How he had been woken by the cries of his neighbour, whose four daughters had been taken away too. How he had woken him and told him that their girls were gone, that Boko Haram had taken them away, to Sambisa.

He had been warned by his friend to withdraw his daughters from school, that ‘it is not the right place to put someone you love.’ But Nana had begged and cried that it remained only their final exams, and that after that, they would be home. He had left them that day in God’s hands. But what was happening? Why was God silent about everything? Why was it like he didn’t even know that his two daughters, his only children, had been taken to an unknown place?

‘Why, God? Why?’ He cried out to the white ceiling.

‘They will return,’ his wife sobbed. She was cleaning her face.

Isa nodded at her words.

Isa sighed as he stood up, buoyed by the crushing sound of his wife’s weeping. He went to his room and grabbed the pistol he had bought from the drunken old soldier near Ilasa market. He was tired of waiting for his girls to return. He would get them back; bring them home for Christmas, or die trying.

Michael Inioluwa Oladele is a student at Obafemi Awolowo University,
Ile-Ife, Nigeria. He writes poetry, fiction and nonfiction and his works have been published on The Naked Convos and Tuck Magazine. A blogger at inspirationalsquad.blogspot.com, he believes we all have stories to tell even though some people are too shy to tell theirs.

The Visit: A Short Story by Asante Lucy Mtenje