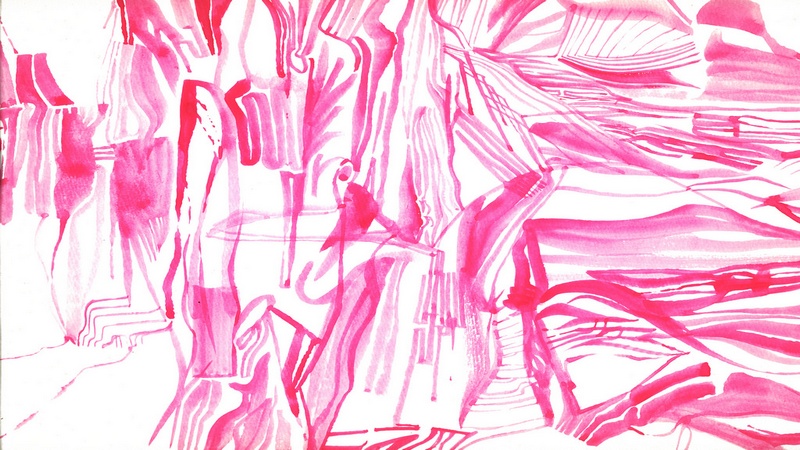 We strolled into the room. Its interior darkness was our light, and lit up our way to the bed.

I led her there. She lay in it on her back. I hovered over her. My heart pounded. It wanted to pull down the walls of my chest, instigating my features to be shaky. Her countenance was an expression between approval and no approval, but the rippled folds of her forehead and her slightly parted lips informed the beautiful frown on her face.

Our lips touched, out of the routine of the encounter than of passion, let alone a genuine feeling of being together as tentativeness lurked around us like a shadow. When I untied her wrapper and pulled down her black panties, she let out a hiss of unease. Myself, already hard, left the panties and went no further. I puffed air out of me. I looked at her. She looked at me. We looked through ourselves as though we were dead trees.

The door creaked open. Mom and dad entered and strolled up into the inner room, where we were. I hurried my clothes on asking her to do the same, pulled her stunned self to the back of the door and asked her to stay there.

Then I went to meet them, mum and dad. I tried to divert their attention to something in the parlor. Mom answered my greetings and went on into the inner room.

I forced myself to wake up.

My heart still pounded like I was haunted. I tried to pray. The prayer metamorphosed into listlessness, so I remained still in bed, under the folds of my blanket, on my back and just stared at nothing in the room’s darkness.

The sonority of the muezzin, the frequent crow of cocks from far and near, tore into the silence and crowded the life of the dawning morning as if competing for the audiences of sleepers.

I felt a bulge on my right side. My hand reached for the area. The object was the book I was reading; fell asleep and rolled over on it. The back page was folded into two under my weight. I straightened it. The picture of the author stared at me indifferently from his smoking pipe.

I put the book down, laid it on the affected cover, and took up my phone. The screen responded with robotic awareness to the touch of my index finger. I opened my mail box. A rejection email stared at me point blank. I stared back straight faced. Was that why I had jitters? I put down the phone on the book. Its brightness became a glint of dimness that disappeared into the room’s darkness.

I sighted involuntarily, turned my head in the direction of the reading table. The writing pad was still there. The morning was becoming brighter. Its light shot in through the glint in the window.

I tried to pray again. My thoughts were whisked away, back to the feeling before I had awoken.

The feelings danced on my mind’s arena like a coquettish damsel inviting me to her fickle world. I reached out only to meet with elusiveness. The dancer was a bunch of random moving dots. Dots that wanted to express the many faces of a feeling that felt unjustly repressed.

At a certain age, some things become the fixation of your mind. Sex is one.  If you have never had sex, the feeling is an incessant obliging that nags.

I want to have sex but with whom?

The instincts seem to be saying, you have cocooned us in your indifference for far too long – your with so-called self-discipline. We can’t endure this cage anymore. We are dying to be consumed in the pleasure that we are created for. You have neglected us for far too long. Now, we wouldn’t give you a chance.

This blast of impulse by the instincts is instigated by a feeling of emptiness. The emptiness floods my imagination most of the time. It keeps coming and the nearest feeling or reaction is the prompting to satisfy its whims, or more or less, to plunge into the facades of those pictures and films that express such inclination in the most explicit manner.

Instincts react because they want gratification. When they have suited themselves, that’s all: nothing transpired! Nothing happened!

That moment of emptiness yearns for meaning. It is an instant that comes when meaning has gone to sleep or has died on the plethoric altars of meaninglessness or rather, become a sacrificial lamb in reparation for the trespasses against the instincts – an affront – a repression of desire!

A moment you call temptation. And the only available motive is an instinctual gratification. It is a moment of weakness when ‘reason’ and ‘will’ slide down the precipice of numbness.

Should I then go and get the gratification?  Should I just satisfy myself? After all, it is what the feeling wants.

It is what everybody does. I hear them discuss, converse at length about their macho escapades. Ladies do it! Men do it! Married ones do it outside their matrimonial homes, anywhere and everywhere. It is common, and uncommon not to be doing it because it is a culture – a practical culture that is not preached but expressed as an obedient abandonment to the whims of the impulse.

The Preacher says ‘no’ to it. Yet in whispers, chitchats, gossips, and intimate conversations, that is all you get. It is a sin only if it is ‘spoken of’. As a practical reality, it is just done. That is its only defense.

My innocence cries in its pristine abode, not to die in the so-called heavenly bliss of the instincts. At least not yet – not like that. We shall not die to resurrect shame. We shall die to bring forth life. Of the oneness of two, we want to die. And there is the joy of dying in that pleasurable bliss that brings life about.

This is a tussle between innocence and the instincts. And that’s why, if you are one of a kind from the crowd, you are in a terribly concocted soup of daily temptations.

I rolled over out of bed, knelt down beside it and prayed again. Lord, I lift up these feelings to you. Help me to perfect them for Your glory…

Battle Against Vulnerability: A Short Story by Emmanuel Onyedi Wingate

Beyond the Magical and the Horrific: Reading Nuzo Onoh’s The Sleepless

Everything Smelt of Oranges: Fiction by Joseph Omoh Ndukwu