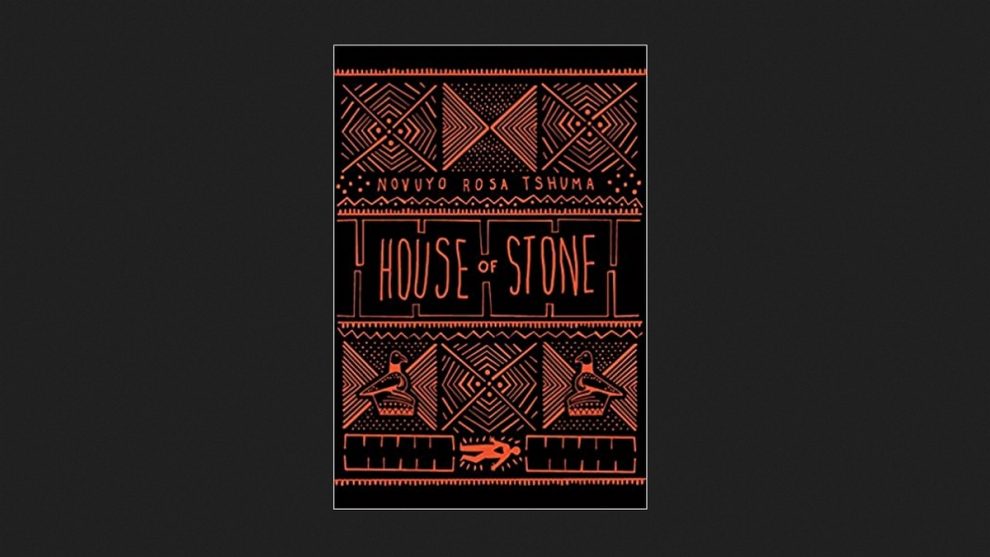 Zamani is a psychopath. Not like Patrick Bateman in American Psycho, but the protagonist of Novuyo Rosa Tshuma’s affecting novel, House of Stone, is disturbing. He uses slyness, technology, gas lighting, propaganda, other people, expensive alcohol and magic potions to turn his landlords into his surrogate parents. He’s likeable in the pitying way you fall for Chimamanda Ngozi Adichie’s Ugwu in Half of a Yellow Sun. He’s also charming in the annoying way that mad men can be.

House of Stone is a book of historical fiction. The backdrop of Tshuma’s book is the twenty first century agitation of the Mthwakazi secessionist group – a movement hinting at the separation of a portion of Zimbabwe into a country inhabited by the Ndebele people and commemorating Queen MuThwa, the first ruler of the Matebeleland region of Zimbabwe. The instigating force of the movement can be traced to the late 1980s genocide called Gukurahundi where Ndebele civilians were massacred. Zimbabwe experienced tribal friction after the loosening of the grip of the British empire. This script of one region of a country looking to amputate itself is common across the continent; from the formation the Republic of Biafra in the late 1960s by the Igbo people of Nigeria, to the Anyanya Rebellion of the late twentieth century between northern and southern regions of Sudan. Canibalisation seems to be the fate of most African liberation movements. The heady thrills of conquering an oppressor yield a voracious appetite for civil war and blood. Tshuma describes a horrific Gukurahundi scene in House of Stone, where a militia man with the nickname Black Jesus slices open a woman’s pregnant belly, spilling the contents onto the dusty grounds of the village he invades, before he sets a hut full of children ablaze. This is above and beyond the rape and dismemberment that assault the reader in a wrenching lesson in Zimbabwean history. The savagery belies twenty first century modernity. It is scary to think that contemporary violence and censorship in Zimbabwe refuse to harken to this bloody and recent past.

Zamani is an orphan. He was ferried by his Uncle Fani straight from the amniotic fluids of his mother’s womb and out of a concentration camp. Uncle Fani raises the boy, although Zamani does most of the work as he wades through Uncle Fani’s post-traumatic stress disorder which overflows in liquor and tears most nights. Zamani stays afloat until Uncle Fani’s death bed. On this last day Zamani catches square on the chest the anchor that is his birth story, which Uncle Fani throws at him in a last-ditch attempt to free himself from the memories of Gukurahundi. A dumbstruck Zamani goes on to organise himself a change of scenery in a paid internship as a nurse in London. Here he seemingly attains proclivities to literature, philosophy and poetry.  Throughout the book he quotes the likes of Nabokov, Wittgenstein, Goethe, Bergson, Wordsworth and displays depth of character and history in sophisticated turn of phrase that denies his psychotic ways.

On returning to the old country, Zamani finds his Uncle Fani’s house now belonging to Abednigo and Agnes Mlambo. What is offered to the young man is a room in the backyard for rent (which, in the vivid language of Tshuma’s writing, is referred to as a pygmy room). He however seeks more than this. He sees a home; complete with a mom, a dad and a little bro in the landlords’ son Bukhosi. Zamani fantasises about a life where his identity is not anchored on a genocidal conception but a wartime love affair. He begins the process of excavating the back stories of his landlords in order to bury himself in their memories and co-opt their past as his. With his prized MacBook he literally re-writes the pluming family tree of the Mlambo’s. It’s an innocent enough venture. Until it’s not.

And that’s when Bukhosi goes missing. From then Zamani uses a variety of tactics and tricks to try and replace the absent son. The manipulation ranges from the sinister to the menacing. He takes advantage of Abednigo’s vulnerability by pushing him off the wagon, force feeding him whiskey and a magic potion called ubuvimbo. He stokes the embers of Abednigo’s domestic violence, placing Agnes in the line of fire so that he can swoop in to nurse her burns afterwards. This, all in order to get close enough to pry open their locked pasts and incept in there the idea of himself as a worthy replacement son. His efforts are espionage like when he entraps a nosy priest interfering in plans of erasing the memory of Bukhosi. The reverend is silenced by multiple photos on the front pages of a local newspaper carrying his rump peeking from the splayed legs of a Sister Gertrude, mid-coitus, curtesy of Zamani’s phone camera.

Tshuma couples Zamani’s charm and wit with a desperation and sensitivity that make you feel for the man. As with most psychopaths there is a severe insecurity that underlies a need for recognition. The slightest of rebuffs from either Abednigo or Agnes sets him off in streams of tears. A day after one of Abednigo’s Zamani induced drunken stupors, the young man tries to seduce the older man with tea laced with ubuvimbo. Abednigo, tired of the incessant presence of Zamani around the house, chases him away;

‘Can you go away. Can you just get out of here. Fuseki, bye bye!’

I cupped my ubuvimbo-laced tea and crawled away, back to the stifling confines of my pygmy room. I wept as I looked at our selfie on my Nokia, before stuffing it under my pillow. I don’t know what to do; I’ve been trembling all afternoon; I feel…lost. (p 95)

House of Stone uses the facility of domestic politics to display the global phenomenon of historical revisionism that plagues many African countries. The intentions of many an African leader who tries to induce a sense of unity after apartheid are noble, until those intensions extend themselves to the ambition of uniformity. At that point memories become weaponised. In London, Zamani meets a fellow Zimbabwean named Dumo. There the pair grow close as they imagine and conceive together the secession project. At home however, a rift grows between the two as Dumo’s revolution becomes dogmatic. Zamani finds it difficult to adopt wholesale some of Dumo’s polemics against the Shona people. For Dumo, the end holds all justifications. While Zamani is no Leon Trotsky or Joshua Nkomo, seeing the movement become the violence that it rebukes causes an undoing of his conviction. At a secret meeting, Dumo confronts a face he doesn’t recognise within the congregants. The stranger is identified as a Shona person. He is then summarily beaten. Escaping from the brawl, Zamani contemplates the end game of Dumo’s ambitions;

What kind of country would our Mthwakazi be? Would we continue the legacy of violence? Could we imagine into being the country as a Manifestation of Love? It was at this point, as I walked and thought the thoughts I thought … that I wondered what my own contribution to our hi-story had been, would be, could be. (p 339)

It is impressive that House of Stone is a debut novel. The book has a maturity about it, delivered in descriptive but crisp language with a style that is distinct. As an example, the quotidian enterprise and routine of Mama Agnes and her side hustle of selling oil, all while harbouring a personal secret and a traumatic past, is relayed with the mature energy that Nuriddin Farah injects in his 2018 novel North of Dawn – where the drama of elders is portrayed as only bubbling under the surface, never quite spilling out into epic scenes. But Tshuma takes this motif and upends it with dizzying twists. The book is also of cultural relevance, said to be a fitting companion to Panashe Chigumadzi’s These Bones Will Rise Again in relaying the anxieties of Zimbabwean youth about their country’s history and insistently problematic contemporary politics. And even though the book has not gotten wide enough distribution in her native country, Tshuma is assuredly at home on the pages of literary fiction.

The Education of Area Boy: Fiction by Tony Ogunlowo

When Love is a Raw Country: Poems by D.M.D. Goodhead

I Dreamt: Poetry by Ahmed Hussain

Obiwu Iwuanyanwu
We use cookies to ensure that we give you the best experience on our website. If you continue to use this site we will assume that you are okay with it.Ok