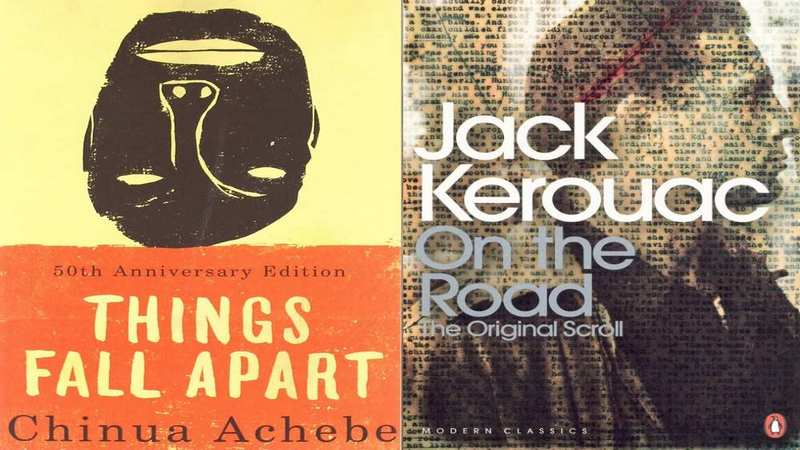 Since man started putting pen to paper to produce novels, no two works of that genre have served to shape their milieus like Things Fall Apart by Chinua Achebe and On The Road by Jack Kerouac. In so far as fiction says something about its place of origin as well as its subject, the two books managed to leave an indelible mark right from their dates of publication; an influence that has refused to wane even to this day. This calls for nothing but a subtle look at the men and circumstances that shaped the two awesome books.

Kerouac, an American who decided to become a writer from age seventeen published On The Road in 1957 under the imprint of Viking Press Incorporated. From eighteen he had also been bought over by the idea of becoming a lonesome traveller and was influenced by his compatriots William Saroyan and Ernest Hemmingway. The book bore the imprints of his “spontaneous prose” and the experience of what has come to be known as the Beat Generation that traversed America in the 1950s. It is extolled for defining a new generation of Americans smarting from the effects of World War II.

Achebe’s Things Fall Apart on its part was released in 1958 by William Heinemann, Ltd. Like is well known, it was written in righteous anger over the distorted and dehumanising representation of Africans in European fiction. A feeling that culminated in his 1975 essay, “An Image of Africa: Racism in Conrad’s Heart of Darkness” that many believe put him in the black book of Western critics.

Without doubt it can be seen that Second World War played some role in the conception of both novels. While it disillusioned the Americans there is no doubting the catalytic effect it had in galvanising Africans into realising that they too, if nothing else, also had a past however odious.

A “rapid typist,” Kerouac typed the original manuscript of On The Road in a single paragraph over a three-week period in April, 1951; this after a road tour lasting a whooping seven years. Though he regarded this as a completed novel, he nevertheless had to retype what became the original roll manuscript several times over to get at the published work.

Achebe on his part wrote out his own story in long hand while working as a civil servant after graduating from the University of Ibadan in 1954. He subsequently posted it to a typing service in England from whom he did not hear from for a long time. Apparently having been sent from Africa it had been left in a closet unattended till he gave a friend on a working tour their address. The rest is now history.

Achebe was born in Ogidi a town in the present-day Anambra State of Nigeria in 1930 when Nigeria was yet a British colony. After an exceptional elementary and secondary school career, he ended up at University College Ibadan supposedly to earn Bachelors in Medicine (MB) and Surgery (BS). In rather unclear circumstances he ended up with a Bachelor of Arts (BA) in History, Literature and Religion. He died in 2013 after stints as an academic in Nigeria and the United States of America. Among his many other titles include the novels No Longer at Ease (1960), Arrow of God (1964), A Man of the People (1966) and Anthills of the Savannah (1987).

Kerouac who left the earth in 1969 aged 47 following complications from alcoholism was born in Lowell Massachusetts. After a Jesuit lower education he won a football scholarship to study at Columbia University but dropped out in his sophomore year. He had a stint in the US Navy during World War II but was said to have been discharged for refusing to take orders. His other novels include The Town and the City (1950), Dharma Bums (1958), The Subterraneans (1958), Big Sur (1962), Maggie Cassidy (1959), Tristessa (1960) and Desolation Angels (1965).

Both books are on the good books of critics for obvious reasons. While all the praise for Things Fall Apart endures to date, quite a few of them have lambasted the trailblazer for being a mere collection of anthropological tales that have nothing to do with fiction.

On The Road on its part did not impress those among the critics that did not like the way it appeared to glamorise irresponsibility as well as its loose style and structure. Concerning this Steve Allen had told him on his show that he would have preferred three weeks on the road and seven years on the book.

Finally, it can be surmised from the foregoing that a good book can come from any person or place and in any form – whatever the purists think. As for Things Fall Apart and On The Road the solace for their transparent differentials appears to be buried in the comment by the American writer Truman Capote on On The Road.  Told how the manuscript was produced in such a record time he said: “That’s not writing, that’s typing.”  Viewed however, it confirms the truism that a novel can be about artefacts and pastimes; authored by a pundit or dropout; and might as well be typed or written.

Isidore Emeka Uzoatu majored in the history of African Christianity at the University of Nigeria, Nsukka. Converted to creative writing by his elder brother, he abandoned his doctorate for stints on the staff of Crown Prince, Nigeria's pioneer male magazine, and Mister, its follow-up, in Lagos. He edited the latter before retiring to full time writing and a daytime job managing a trading company in Onitsha. Vision Impossible, his first novel, took twenty years to complete. He is married with children.

A Lifetime Under the African Sky: A Poem by Carol Basudde

Poems, Excitable Pursuit and the Company of Words

May the Years Be Kind: Fiction by Anjola Adedayo