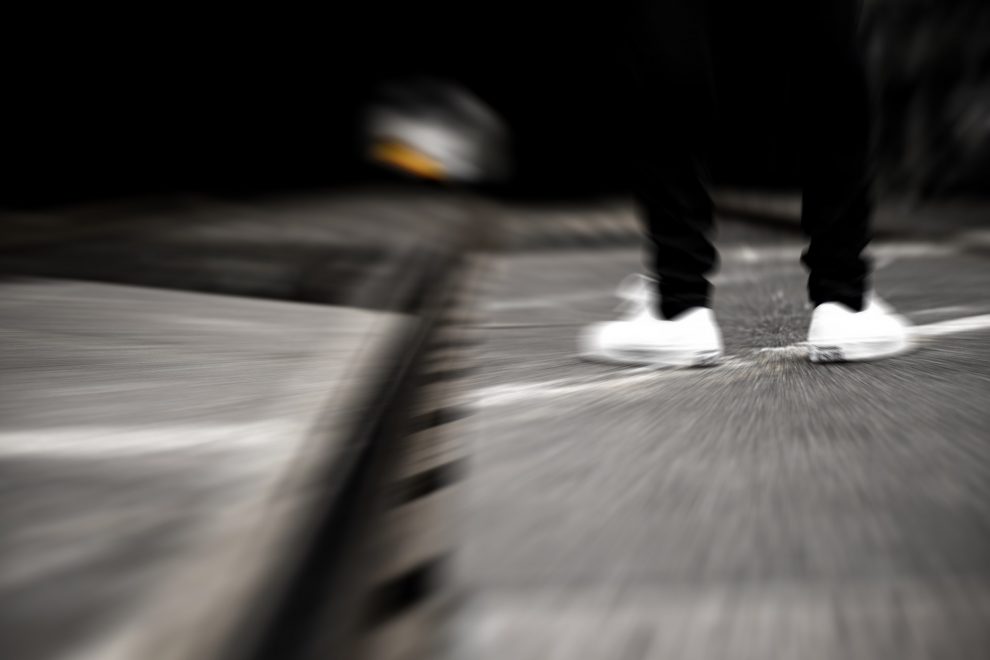 WE ARE STRANGERS WAITING FOR THE TRAIN

It is who you are. We all came from
Adam’s Eden. Walked down that road.
There is just an empty space. I act
now as if in some way we’re connected.
For those who leave there waits an
an inferno. You are my wandering soul.
Dahlias in bloom. Child abuse during
the week. Saturday. Sunday. You were
my wild thing. When a man forgets himself.
It was always love-at-sight. Alice finds
it hard to trust people, climb mountains.
This is her age of innocence. The man
sitting next to her is nothing more than
an illusion. I’m just an Alice who longs
for a child of her own. How strange is
the life of a monogamous woman. She
collects sharp objects and they flow over
into her life. I am the Alice the-writer-in-the-

cage. She tells herself she is mad to fall
in love with unavailable men. They will always
leave first thing in the morning. But she
prefers it that way. Seeing them in the light
before they depart they will kiss her chastely.
And she’ll be aware of the burden of her
sexuality, her femininity. I think of you. I think
of you she says to no one in particular.
How you don’t belong to anyone. How you
don’t belong to me but God. You turn
my flesh into meat. Pain is as sure as rain.
Alice is a thin woman, a bone woman
who listens to Mahler in the evenings
while she cries herself to sleep. She thinks
of herself as the prodigal daughter. And
in my torment of vertigo I am Alice. She’s
no stranger to me and every man is a desert
to her, the grasslands of Africa. Vulnerable.
Capable of many beauties. Even paradise.

THE BIRTH OF A PERFORMANCE

Tender is the night. Take romantic love
for instance. I talk to God in the middle
of the night, the universe and all my angels.
I chose my mother. I chose my father.
My bone and flesh are of Khoi-descent.
Just like a woman I write, I fall in love,
and I fall out of love. I think of shipwrecks
in much the same way I think of driftwood,
teenage anguish. I think of a woman’s
room and the chill in the air from winter.
There was a road to nowhere once when
I wanted to escape the eventuality of
another nervous breakdown. Climbing
back down that volcano was hellish.
Don’t poets have sad lives? Do I sound
like a sad case? I’m composing again
from memory. How can I make this stop,
I ask the therapist. She has beak and
triumph on her side, bird nose while I
dream of Orlando. Woolf’s Orlando. I became an
observation. I the once bone-thin woman

became an observation, a study with a case
history. In my twenties I tried to understand the
language of sex and drugs making light of
darkness and I thought of all the consenting
adults in the world, in this room. Men sleeping
with women. I thought of marriage in my
twenties. Early twenties and then became
a poet. ‘To submit’ were words I had never
come across in a book. I longed to be transformed
by that word ‘submit’. The Adams’ I choose
were older and full of grace. I loved them all.
One day I will be an old woman and I promise
I will never forget all your names. You are
man and I am Eve. I will always be Eve writing
to reach you. Thinking of how tall you looked
in moonlight. All these years I’ve been hopeless
at finding love. Studied at no schools. I loved
you all. I think of rooftops now. Antigone. Plath. And
sometimes I think of you with tears in my eyes.

how to not follow the norm: Poems by Michael Ifeanyi Akuchie

We Have Decided to Help: A Short Story by Adaobi Tricia Nwaubani

Petina Gappah: The Storyteller from Easterly

Hollow in a Man: Poems by Mary Opaluwa

Mary Opaluwa
We use cookies to ensure that we give you the best experience on our website. If you continue to use this site we will assume that you are okay with it.Ok