I’ve tried many times to put on paper my reasons for writing To Saint Patrick. What could I explain in 2000 words—the energy expended in writing the book itself? Kai! 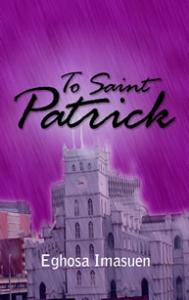 So what did I write?  I wrote a genre novel. Something even I thought odd: an Alternate History. Of Nigeria. Alternate history is a subgenre of the science fiction and fantasy genre. When I first pitched the idea to publishers in Nigeria, I wasn’t laughed at. No. What I got were those looks of, “Eiyah, this one don crase o. Naija no dey carry last!”  And then they would ask me what my ‘alternate history’ would be about? I usually replied this ‘polite’ inquiry with the questions of my own: “What if Murtala didn’t die in ‘76? What if Dimka missed?” Because that is what alternate history does. It asks questions. It creates an opening for those half-chances and what-might-have-beens of history to be put forward.

I have always been a ‘fan’ of alternate history. From Philip K. Dick’s The Man in the High Castle to Harry Turtledove’s Great War series, and then the greatest of them all, Richard Harris’ Fatherland. But while I enjoyed all these books and the questions they asked—

What if Alexander the Great had turned back from India an afternoon earlier? Would the mosquito that bit him have taken his life? Would a farming tribe of Latins from the Italian peninsula have been given a chance to rise to world-conquering status?

What if the Leif Ericsson’s colony in Newfoundland had survived? What would be Cristoforo Colombo’s claim to fame? What language would be spoken in North America?

What if Tesla had been less of a misanthrope? Would Thomas Edison have gotten away with his bullying? Wouldn’t we now be travelling to the moon via electronic teleporting, a la Star Trek?

What if the Nazi’s had won World War two?

—there was something I always wondered about. And that was about my people—Blacks, Africans, Nigerians—and their place in this universe of the imagination.

The logical conclusion was that I would start asking my questions:

What if Queen Victoria had changed her foreign minister before invading Benin, Koko and Opobo? What if, kpa-kpa, she had died of the childhood measles before she even heard the words Slave Coast or Gold Coast? Would she have become the famous carrier of the bleeding gene?

What if Anthony Enahoro had gotten a toothache—or worse, a sore throat—in ‘56 just before he was due to move that famous motion?

What if Awo had called the Sardauna’s bluff about the North not being ready for independence? Or, to go back a few decades, what if Lugard had broken up with Miss Shaw before she came up with idea for that name, or the anthem, or the amalgamation even sef?

There were so many more questions that boiled in my mind. But what is noteworthy about these thought experiments—as I like to call them—is that I have had them all my life. As far back as I can remember I have always been intrigued by how easily history could have been turned by the proverbial missing horseshoe nail. How something as simple as Major Nzeogwu coming down with a bout of acute diarrhoea on the evening of the 14th might have forever changed this country’s history. Would the Nigerian Civil War have been fought over the seceding Ibos?  There probably would have still been a civil war, I think, but maybe in Tivland. Maybe the Tiv crises of late ‘64 would have escalated into a full-blown war had its main protagonists been encouraged by the distraction caused by the Western Region House of Assembly . . .

But wetin concern agbero with overload? I am a medical doctor. Up till early 2005 all I had written, apart from a few laughable attempts at comics and a three-page outer space/time machine story in primary school, were essays describing in excruciating detail the inner workings of the human body and, after getting my degree in ‘99, case notes detailing in boringly excruciating detail the humdrum lives of patients. I had tried travelling overseas, to the US and the UK, and had been bounced twice. I was waiting for my primaries—nasty exams that decide which doctor gets to become a specialist and which ends up prescribing anti-malarials for the rest of his life—when one day I got into a heated argument with my mother over stagnated potential and God-given gifts. She waved a magazine page in my face. It featured this attractive Ibo chick who had just written a novel about royalty-coloured horticulture, or so I thought at the time. My mother said, “See this. Is she not your mate? Did she not study medicine too? Why can’t you do something like this? You’re always so quiet. Do you want to be dividing chloroquine and chloramphenicol for the rest of your life?” This is the way my mom argues, twenty questions punctuated by a statement or two. Still, her questions got me thinking. So I travelled to Lagos and bought the book.

I was pleasantly shocked.

It was not about hibiscuses at all. It was a breath of fresh air. It seemed that the writer spoke with my voice, with my pain, with my joy. And it didn’t apologise for any of this. It removed the apprehension with which I read most of my country’s fiction. I had studied Literature in secondary school and had always been depressed about how most Nigerian novels post-Things Fall Apart read like clones of their far superior forebear.

Inspired, I said to myself, I can do this. How hard can it be? I sabi write na (I now regret that initial optimism—writing is hell, lonely hell). I already had an idea for my first novel: for many months it had lain fallow, bubbling beneath my consciousness, lifted from deep down during those hypnagogic moments before deep sleep, but forgotten during my waking hours. And it was simply this: What if Murtala Mohammed didn’t die?

My mom was in her fifth month of confinement—I was the chap in her womb—when General Murtala Mohammed was shot dead at Onikan on his way to work. Two of my earliest memories are of my mother changing the calendar from 1978 to 1979 and my father explaining to me who the guy on the pink twenty naira note was—this was before the Buhari–Idiagbon regime changed the colour to green. There was always this thing. Everybody felt it. What if the guy had gotten more than six months? But as I got older, I began to hear more things. This ‘saviour’ was a more complex character; there was nothing black and white about him. Some people thought him a bloodthirsty villain. My own grandfather, an Itsekiri police officer who had been accused of being a Biafra collaborator during the invasion of the Midwest, spoke of how he had barely escaped the clutches of Murtala’s murderous 2nd Division. Then I began to hear whispers of what he, Murtala, did during the ’66 countercoup. I heard about the Lagos and Kano airport incidents. I heard about the temper. Yet even granddad, who couldn’t stand the man, would grudgingly admit that he had done some good during those final six months. So if I was going to pick a ‘point of divergence’ for my great alternate history novel, a point in history where a simple change could have had a good—or probably just an interesting—effect, what about this?

If Murtala had been head of state would the infamous ‘two-thirds of nineteen’—Nigeria’s arithmetic gymnastics that settled the ‘79 elections—have stood a chance? Or would a runoff between Awolowo and Shagari have featured a re-aligning of allegiances and promises? Imagine if Zik’s NPP, Waziri’s GNPP and Amino Kano’s PRP had formed a coalition? Shagari would probably have lost the run-off. The country might have had a great chance to teach its people that presidential elections in which more than three parties stood are scarcely won on the first ballot; Nigerians would have learned to be more discerning when reading magical winner-take-all election results.

What about the anti-corruption war? If Murtala had handed the reins over to Awolowo in October 1979, how do you think this fight would have gone? Would we have heard of Dikko and Co? Probably. They might have become a vibrant opposition instead of the brazen kleptocrats that history has condemned them to continually deny that they are.

And most important of all: would he have had a chance to apologise to Nigerians for the excesses of the sixties, for the tears, the massacres in Asaba? Would he have wanted to?

To Saint Patrick is my attempt to construct a Nigeria of our dreams from the ‘what-ifs’ and ‘what-might-have-beens’ of this country’s recent history.  It is fiction, it is alternate history; but beyond that, I hope I have succeeded in writing a lovely, readable story that touches anyone who reads it.  That is my definition of what a writer must set out to do.

And it is also my emphatic answer to the accusation of stagnated potential.

Eghosa Imasuen, a Nigerian novelist, was born on 19 May 1976. He has had his short fiction published in online magazines like blackbiro.com, African-writing.com, africanwriter.com, and thenewgong.com; and has written articles for Farafina Magazine. His first novel, To Saint Patrick, an Alternate History murder mystery about Nigeria's civil war, was published by Farafina in 2008 to critical acclaim. He was a member of the 9 writers, 4 cities book tour that was concluded in early June 2009 in Nigeria and was named 'writer of the festival' at the 2009 Lagos Books and Art Festival. He is also a medical doctor and lives in Benin City, Nigeria, with his wife and twin sons.

Chijioke Amu-Nnadi: We have authorship, not authority, over what we write

The Face of God: Poems by Oliver Mbamara