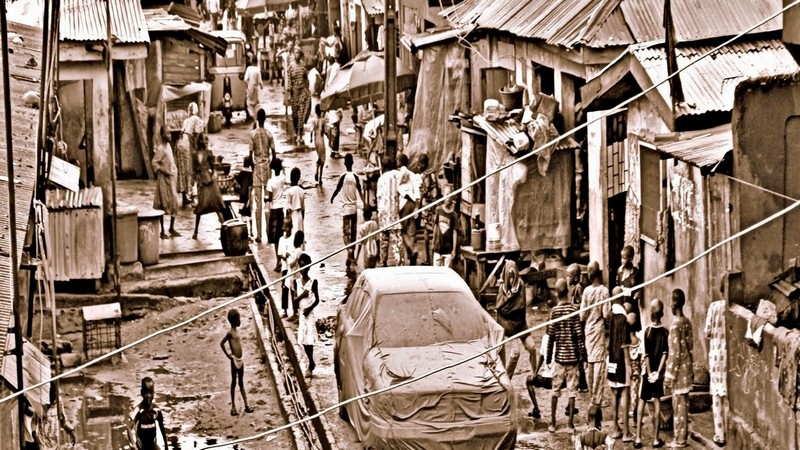 Rusty roofs. A thriving lizard runway through the cracked, algae-threatened walls. Smelly debris-filled gutters. Their gruesome stench assailing your every breath. A refuse dump salutes you whenever you open your room’s only window. And this is where you live; this is where you call home.

The cockroaches have ceased coming out only at night. You live alone but your unwelcomed, tiny, four-footed roommates no longer scurry away when you approach. They outnumber you and they now wonder what you are still doing here; the present situations suggest to them that they are at home and you are the intruder. It’s the same question you ask yourself. Everyday.

When it rains, it pours…and floods, making your carpet-less room an embassy of the chaos outside. With a rubber bowl, you bail out the ankle-deep water with one hand, scratching your prematurely balding scalp with the other while muttering to yourself, “My life isn’t meant to be like this. This is not the life I planned for myself.” But is that not what more than half of the world’s population say?”

You pause for a while and look around. Your gaze falls on your convocation picture. It is the first thing a visitor sees when he steps into your room. Just high on the wall opposite the door. But you rarely have visitors. Misery loves company, but this Misery has given up on you. The photograph is an old portrait of once buoyant youthfulness that has become obsolete, losing its grace as age painted her wrinkled brush across your brow. You can swear who you were is enraged at who you have become. You do not recognize yourself any longer.

You are scared of gazing into the well from where you and the whole neighbourhood draw water. For in it, you do not even own a reflection on most mornings. You groan in anguish. You want to fight back. You owe it to the people who have come before you to keep going even though it seems the path you are currently on is rigged with landmines. To trudge ahead, defiant of the odds besieging you. You were strong once, what happened to all that strength? You who championed school debates, topped your class every session, won annual best student awards and Overall Best Graduating Student Award? What happened to the man whose appearance made life feel threatened as though you could subdue her with your hands tied behind your back? What happened to you, nna?

Alas, life’s hassles have transformed you from a visionary to a wishful thinker. For every punch you threw at life, she maneuvered and returned a knockout.

A wall gecko swaggers across the picture. It stops, stares at you, a small stream of liquid jets out from its ass and lands right across your face, then it continues on its journey.

You finish your task, then stand at your doorstep and watch the children – wearing threadbare clothes – playing in the muddy street. You shake your head at your neighbours’ desperate conditions. Like a broken mirror, they still are a reflection of who you are. Of who you have become. You are mad at your neighbours for bringing up children in this squalor. Is it not why you have never had a relationship that saw two full moons? Whenever the topic of where you lived arose, you quickly laid them off. Ifeoma. Jessica. Lola. Even Rashidat, the dimpled nurse, who was willing to do anything for you and fight the world on your behalf. She had followed you home on that fateful day without your knowledge. And despite the fact that she was not embarrassed about your surroundings and had still called you ‘masoyi na’, you ordered her to go away and never come back. Calling you her love had failed to reach your heart.

So she left. She left and she never came back. For in that moment those words escaped your lips, she realized the truth. You were a man broken in so many places beyond her abilities as a nurse and counsellor to heal.

“I’ll leave this wretched house next year,” you had told them. Your neighbours. And you keep telling them. But they are weary of hearing it.

Isn’t this your fifteenth year of saying it?

Chijioke Victor Uche aka Ceejay, is many things to many people. Writer. Accountant. Blogger. Friend. Et cetera. But first and foremost, here and now, a writer. He has written stories for radio and has had his literary works published in online magazines and literary journals like KALAHARI REVIEW, YNAIJA and RUNNING OUT OF INK (Scotland). Chijioke lives and works in Lagos, Nigeria.

The Eagle: Poems by Abayomi Ogunniyi

I Died: A Short Story by ‘Lakunle Jaiyesimi

Every Day is for the Thief…A Review by Tolulope Ogunlesi