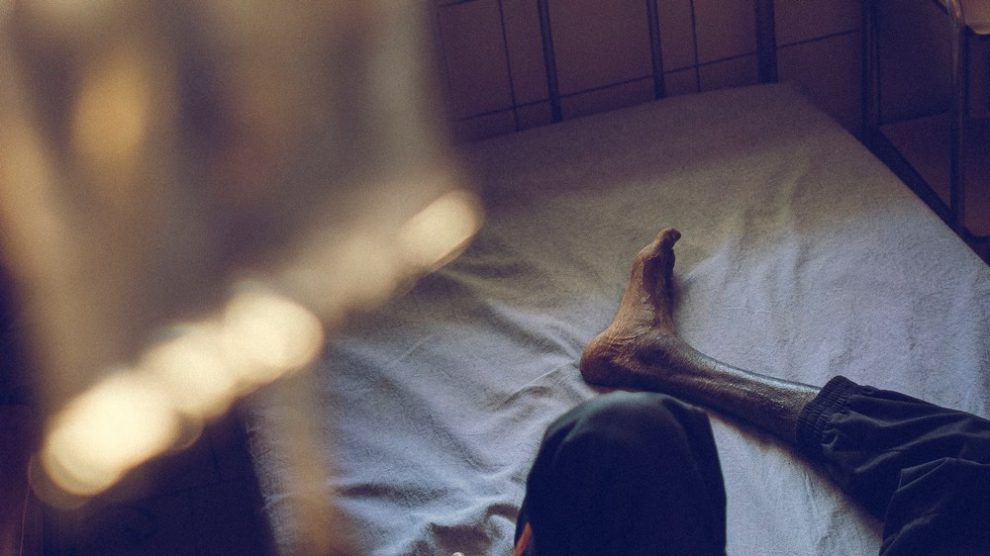 She looked in on him as she had come to do each week on her arrival into the sprawling and densely packed community where she worked. Sara was European but had spent many years in Africa and loved working with Africans in their own communities. It was second nature to her to greet the children in their own language as she parked her battered car on the dusty roadside

‘Wakadii’ she shouted at them.
‘Ndiripo’, each responded enthusiastically.
Although thirty years after independence, not many white people of her vintage spoke any Shona, and so her few phrases were welcomed enthusiastically. The scrawny smiling children jigged around her billowing skirt excitedly hoping for a treat. She smiled a lopsided smile under her short curly brown hair as she said, ‘Ndine urombo, handina chinhu kwauri nhasi, Sorry I’ve nothing for you today’
They melted away in a gaggle of giggles.

She stopped to admire the scraggly green vegetables in neat rows cultivated by the persistence of the aging matriarch of this family in the dust and dirt of the roadside opposite. There was no more water in the taps so every spare piece of land was cultivated and kept alive with water carried daily in large plastic containers. This particular patch of vegetables was nourished from the nearest stand pipe a good fifteen minutes’ walk from the house.

Sara knocked on the door saying a cheerful Gogogoi and its response Hodi and was welcomed inside by the same matriarch, the mother of the woman she worked alongside and the man she had come to visit. She greeted her with the customary morning greeting of Mangwanani, mamuka sei? She always loved the set of responses that ended with ‘I slept well if you slept well’. Aneni still had the big bones of her youth and lineage but her face and worn dress showed the toll of the last few years. Her home built in the 1950s with money from her husband’s railway employment was a modest one story concrete and brick dwelling of three small rooms with this tacked-on bedroom that allowed her beloved son Rudo the space he needed to move through his final journey. His very slight frame, worn down to a frazzle by the virus, barely made a ripple under the bedclothes. Although it was over 30 degrees outside and not much cooler inside, Rudo’s body was enshrouded in a thick winter multi-patterned blanket that lit up the dark room. A colorless valance hid the bottom part of the crumbling bed base. It was difficult to see the color of the walls, covered with soot and dirt and lack of soap and painting for many years.

These were the iron years, the long withdrawal from all that had been normal before- the world of work and parties and new life and opportunities. Sara had seen precious photos of the family in former days of wage earning and comfort. These big bodied people had shrunk down into their bones as the economy collapsed year by year. Now with the onset of the verminous attack in every home, the veil of death hid in the corners of every house, in every family. Like living ghosts, these people were hidden away in shame and horror, carefully tended by the matriarchs of each family, always terrified that they would make one slip and the virus would take away their chance of saving the future.

Rudo had been a successful business man but always lived up to his name which means love. He was still tall and enormously attractive. Even now his face radiated a mischievous sense of humor that escaped periodically from his candida-encrusted lips and throat. He tried mightily to mask his immense tiredness with humor, but he was not tired of life. He loved having visitors to his modest bedside, to be regaled by different points of view and being kept in touch with the outside world. As for so many others battling this death sentence, his bedroom had become like a cell; draped in silence, sorrow, and regret. He regretted being the unspoken burden instead of the successful breadwinner. He regretted having passed the virus onto his loving wife in ignorance. She had ‘become late’, that peculiar euphemism for death in his country, only a few months previously. While watching her sad decline he had wrestled to accept that this vileness had come through him into their home, their achievement in the world.

All was gone now. Only his young daughter was left with the prospect of double orphan-hood and her years of dependency in a precarious life. She was the only thing he was leaving behind that he valued and he knew that her long road ahead was mired in uncertainty. But he knew that she also had one quality that he had transmitted to her, the precious gift that lay hidden inside him and had drawn Sara into this tiny unattractive room filled with the few remains of the family possessions left over from the leavening out of the comfortable life forever lost.

Somehow, miraculously, Vimbai had been blessed with the gift of trust. Still only a spindly, skinny twelve-year old, she knew that her father was close to death, the un-nameable, culturally venomous thing; this vermillion stain, in a country being torn apart, person by person, every third being.

Rudo spoke to her in his drained whispering voice;
‘I love you and will always love you. I know that my going is very painful for you and the entire family. I know that we cannot talk openly about what is making me so ill. One day you will stand up and talk about being a survivor. Of going through this storm as we can call it. The power of those winds is now so high that nearly everyone is getting swept away into destruction. But you will make it. You come from a very strong and loving family and your auntie will see to it that you get every chance to grow up.’

Her auntie Danai had also spoken to her.
‘Vimbai, you will be a leader among women when you are older. Don’t stay in the pain of the present all the time in these days. You need to look to the future always. I am here for you and so are your cousins. Together we will make it through.’
Danai had already buried her two sisters and taken on their children. They had all nearly starved last year but she had never given up and had found a church group that gave them a family food parcel every month. Now she had a part-time job that was bringing in a small income and her son was sending a little money from South Africa.

In the midst of this nightmare Vimbai knew that she would be alright. Somehow her auntie would find a way to find food for them all, for school fees, for a future that beckoned to her; a reassuring light in this tunnel of despair. She played happily outside in the dusty compound as she hung tattered clean clothes on the washing line with her cousins. The sounds of her laughter penetrated into the room and lit up the love in her beloved father’s fading eyes.

Sara looked down at Rudo as he told her slowly and carefully about this gift, this bright ray lighting up his exit, this spotlight on him as he gracefully faced each day of torment with utmost trust. Sara pulled back the heavy blanket and the stained sheet. Rudo’s sticklike legs were riveted with the dark bruising of Kaposi’s sarcoma, the badge of the vile shame of AIDS. It was impossible not to notice its steady advance, staining the skin virulently from head to foot.

She took hold of one precious foot and started to massage gently. There were murmurs of appreciation in the quiet room. There were drifts of sound from the road outside but they hardly penetrated into this vacuum of peace. Sara took hold of the second foot and worked slowly and carefully again. Fragments of conversation like shearings of his being floated around her fingers as she worked. There were gentle jokes, timeless stories, and the wisdom of extremis. She felt no separation, just unity. She loved being in this place- no expectations, no targets, no time restrictions, just trust and love. As she left there was no fuss, a whispered Mazvita (thank you) from one to the other and the silent witnessing in Danai’s eyes as they went on with their work together in the community.

When she arrived the following week, it was to accompany the family to the cemetery where bodies were shoveled into holes every five minutes after rushed prayers. Later she found out that Rudo’s blanket had been stolen with two others, by the well-wishers, who came for free food and to see what else they could take away.

I have been a social activist since my late teens, did my apprenticeship in Ireland and spent many privileged years living and working in different parts of Africa. I am now living in southern Spain involved in sea ecology and climate change challenges. I'm a passionate member of an international writing group with great aspirations. I love being in this amazing world and watching our unfolding at this point in our evolution.

Melony Akpoghene: Conversations with her

On the Flip Side: Fiction by Deleteh Bank

Emmanuel Idem: The Chaos of Belonging