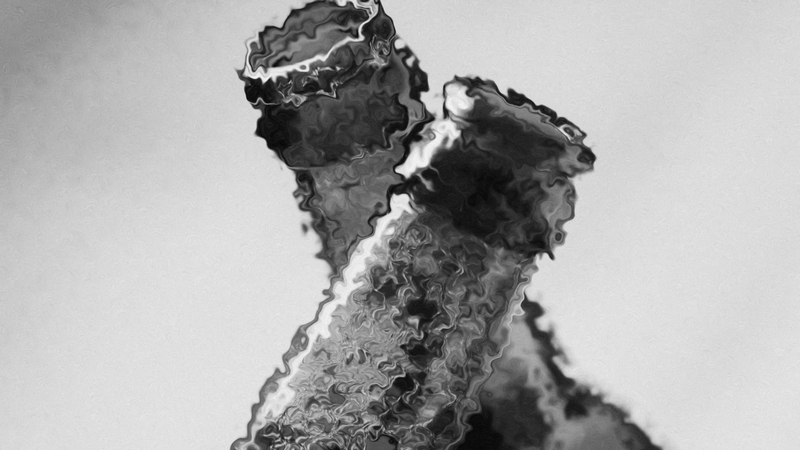 Tom, agitated by nothing but his own haggard reflection in the mirror and interested in nothing but his research work, perched on a stool in his dingy room, peering at the mirror. Terry, excited by everything endowed with the ability to excite and interested in everything about himself, sat in his carefully structured room, preening himself at the mirror. Tom wore a consistent frown, priding himself on his learned, scientific disposition, having been trained at the university as a botanist. Terry wore a happy grin, conscious of his charm and the ebullience that crowned his youth, completely free from worry, having been inoculated of that by his training in philosophy at the university. Tom was tall and slim and bald. Terry was short and stout and full-haired. Tom was thirty-five. Terry was twenty-five. Tom, dropping his mirror and ignoring his research work a moment, walked up to and stared out of the window. Terry, smiling happily and whistling Jolly Good Fellow, stuck his hands in his pockets and walked up to his window – not to see anything in particular, he could actually see nothing but himself everywhere. Both souls lived beside each other in a straight block of four rooms, boys’ quarters you could call it.

Terry will call out first; it’s about time for a warm chitchat over glasses of beer and juice. They like that mixture. It particularly keeps the talk from wandering into the forbidden dark forest of unwanted jokes and keeps both men clear-headed enough to keep their girlfriends out of the talk – at least, that is the legitimate reason they can muster for that concoction. The talk starts with Terry. No, it will start with Tom actually. Tom will walk up to his window, scratching his hair-bereft head and thinking of the next phase of his research and the particular direction to which he should tilt it. Something in the act will call Terry’s feet to the window.

‘Terry, is that you?’ Tom will call out.

‘My brother, I hail you!’ Terry must return, cheerfully.

Both men must step out of their rooms, each clutching a stool. They will place down the stools. Terry will wipe his stool clean with his palm and rub the palm on his shorts. Then will Tom spring up from his, remembering only then that he forgot to clean his stool before he sat on it. He will wipe it now, with much fuss, and then Terry will cackle and say: ‘My brother, but you already sat on it.’ And then Tom will stop and scratch his head with the same palm and sit again on the stool, all smiles.

The block of rooms in which they live overlooks the main building in the compound, and from the look of things, that block of rooms is an afterthought by the landlord. The main building is a bungalow made up of twelve rooms, all of which the landlord has let out to men and women who need some sort of home badly. Lagos is a large commercial city; it pulls men and women from all corners of Nigeria – well, that is no new piece of information. This naturally necessitates the existence of houses built solely for commercial purposes. The landlord, a kind-hearted man, had only three years ago, decided to build a boys’ quarters – which one may also term BQ – on the tiny strip of land behind the building. It was his inimitable sense of compassion that drove him to making such a compassionate gesture, for those homeless men and women could have been his own sons and daughters. And, being extremely modest, he is not to be seen in the building any more than sixteen times in a month to get his monthly rent from his tenants. Yes, he has been most magnanimous by asking his tenants to pay him only ten thousand naira monthly, unlike other pitiless landlords who demand annual rents. What more could one wish for in a landlord!

Tom and Terry must start their discussion with the landlord. After some babbling about his bulging belly, about how it looks as if the landlord hides a balloon under his garment, about how his roar when he came in the morning to get his money from this or that tenant disturbed the entire compound, about how distasteful it is that he is to be expected every other day, they swiftly change the course of the chat. The chat will now be directed towards their dream cars, houses, and such other mundane things. After some prattle in that direction, Tom will declare his thirst, and so will Terry. Each will retreat to his room and return with something to drink. Tom will emerge with a large bottle of Boom orange juice and two glasses, Terry with four bottles of beer.

‘My brother, you will find it difficult to pay your homage to the toilet if you continue drinking this sugary juice. It’s poisonous, I tell you,’ Terry will say.

‘Terry, nothing can harm me, as you see me like this,’ Tom will reply as he opens the bottle of juice and pours out two half-glasses.

This coincides with Terry’s uncorking two bottles of beer. Tom stretches out one half-glass of juice, which Terry accepts with many thanks; he stretches out an uncorked bottle of beer. Tom must be prevailed upon to accept it, with immense thanks. They empty their bottles into the glass and slowly savour the curious mixture, proud of their ingenuity.

Now must the second phase of the chitchat begin. And it must begin again with the landlord.

‘Do you blame him? He is half-educated. Is he even educated at all? You cannot compare yourself with a man like that. That is why I don’t argue with him,’ Terry returns.

‘But there is a larger problem than our landlord. The problem is this country. It is too sick to be cured,’ Tom jerks back his head slightly and nods emphatically to punctuate the gravity of the sickness he has diagnosed. His balding head has started drooping above his shoulder, an aftermath of the beer.

‘I am telling you, my brother. Many things are fundamentally wrong with this country. In fact, I don’t see a cure in sight.’

Terry shakes his head slightly. He refills his glass, this time with just the beer. He smiles as he lifts it up to his mouth. He towels off the froth from his large lips by running his tongue across them. He motions to Tom, who has not noticed until then that his glass is empty, to refill his glass. Tom pours himself a half-glass of beer and is going to add some juice when Terry chides: ‘I have told you to always try taking the beer without the nuisance of the juice.’

Tom lifts up his bald head, shakes it in protest and goes on to fill up his glass with beer. At this, Terry smiles triumphantly. Tom looks up at Terry and they laugh happily.

‘I tell you, Terry, you have my number. Only you can unlock me in this house.’

Silence nestles between them for a while before Terry rises to introduce two more beers to their chitchat. These last beers are not to be ridiculed with juice.

‘Terry,’ Tom starts again, ‘this our country, I tell you, it is mad. And worse still, your people are calling for Biafra. Those senseless people!’

‘Senseless? Not at all. What else do you expect of them when the government of the day continues to marginalise them? No, they are not senseless; they are invoking the spirit of Biafra. It is the spirit of ingenuity, brotherliness, fortitude in the face of troubles, resilience and pride. It is the essence of the Igbo people. That is what they can do at a time like this.’

‘No; you people are just stubborn, if you ask me. You cry foul over every little thing. You have been talking about marginalisation before the death of Zik. Fine, the first call for Biafra was justified; no one would stomach such a senseless massacre of his people without lifting a finger in retaliation. But you people have never belonged to this our Nigeria since after that war.’

‘Nigeria does not belong to us,’ Terry returns, his eyes, a pair of small red balls, fixed on his almost empty glass of beer. ‘It has never belonged to us, and it will never be ours. And if I am to say, it is you Yoruba people that should be blamed for the woes of this your Nigeria.’

Tom never likes the sound of that sentence. It jars his nerves. He sinks a long, spiteful look into Terry’s being, who returns the gesture with equal animosity, and between his teeth he releases his words with theatrical menace: ‘You are a fool.’ It is just the way Pete Edochie would have said it, eyes screwed in elegant anger, in a Nollywood movie.

‘You people are traitors,’ he pursues, his voice now a pitch too high. ‘You are sly. You people shouldn’t be living among us, other Nigerians. You could have ended this impossible country during the Civil War, but you chose instead to let it go on, benefitting from the woes of this strange union.’

‘I don’t know what your problem is. It’s no use pining. No use at all. You people should just wake up to this reality.’

‘What hogwash!’ It is just like Terry to use words like that, words that years of reading a page of the dictionary before bed have taught him.

Tom will not take that. He rises unsteadily and makes for Terry’s face with his open palm. It’s a resounding slap. Terry returns it, and goes into his room. Tom, too, turns into his own room, loudly slamming his door, too loudly.

No neighbour will come out to see what has gone wrong with the two friends, because Tom and Terry will come back tomorrow to sip some juice and beer, as if nothing happened yesterday.

Tolu Akinwole is a PhD student in English at the University of Wisconsin-Madison where he recently earned a master’s degree in African Cultural Studies. He is interested in the everyday politics and Afropolitan sensibilities of the African urban space and how these are shown in Anglophone African literature. He is co-editor of the poetry anthology, Our Legacy of Madness.