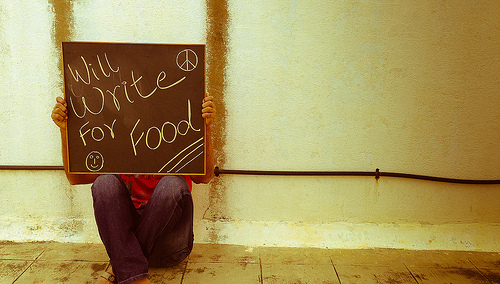 At the advanced level class of the recently held Abuja Writers Workshop, I have tried to answer that question. And because I know that this question is important to us writers who in most cases do not understand what it means, talk less of providing an answer, I have decided to get us all involved at this level of literary discuss. The objective of course is not to split hairs with anyone, but to help writers who are trying to improve their writing hone their craft.

So, what does it mean when a Zeus or literary critic looks down on your work and hands down a sentence like this – ‘you are telling, you’re not showing!’ I was once handed that same semi-death sentence and it almost snuffed the light out of my passion for writing. But my writing did not die. In fact, I survived by arguing my way out of the delirium thus – As Africans, we tell stories, don’t we? We don’t show our stories as the oyinbo does on television and on cinema. We tell! If the oyinbo chooses to show their stories, that’s their wahala – we mustn’t copy their ways always, should we?’

But I had to be sure of this, so I fell back on the notes I took in school, only to find out that I’d actually been told about telling and showing, but in a different language.  This was how I was told the story. A long time ago, a William Wordsworth, who was then known as the leader of the Romantic school of poetry, used a certain term to criticise his friend, Samuel Taylor Coleridge’s writing. He said about his friend that his friend was ‘incapable of being in uncertainties’. And that to be capable of being in uncertainties one had to be able to use objective correlative to achieve this. According to him, objective correlative is the only way a writer, poet or dramatist could express any emotion in the form of art. In this definition of objective correlative, two key words stand out – emotion and art. Emotions can either be internalised or externalised. Emotions are universal. Emotions are trans-boundary and they occur to us irrespective of our colour, race or creed. Therefore, if we must capture these emotions and freeze them in a time capsule, aka art, for generations other than ours, there are certain skills we must possess and use when we write.

At this point, we must also realise that to be a writer you must not necessarily have to go to school to study literature or English. Many winners of key prizes for literature are not graduates of English or of literature but people who know how to tell stories irrespective of their profession or vacation. In spite of that, however, if you were to desire to be a better doctor or lawyer, you should pass through some kind of tutelage or pupilage. It’s the same thing with writing.  It became important to spell this out at this stage because of the need to recognise that if you want to be some kind of consummate writer who would like to express certain emotions in the form of art, you must come to a place where you experience tutelage and pupilage. At our workshop, we teach our writers to avoid certain words – no, I take that back – they must use certain words in their barest minimum in stories.

The words we’re talking about belong to a certain sub-division among the ten parts of speech known as ‘content words’. The ‘ten parts of speech’ are divided into two categories – nouns, verbs, adjectives, adverbs (content words) whilst the others – pronouns, conjunctions, interjections, prepositions, demonstratives and the articles of English – are structural. Our focus in this discussion is on the content words – to the extent that this focus on this group of words can actually help us tell our story by showing, that is, if we know how to deploy these four kinds of words – the words we use in our stories. I should make it clear here quickly that the key word is ‘deploy’ and by that I mean nearly all the words in the ten ‘parts of speech’ all have a dual function. What that means is that words like ‘drive’ or ‘run’ or ‘sex’ can be verbs and/or nouns as well, depending on the use and context they are put.

Adjectives also have absolute, comparative and superlative functions and indeed even though English allows about thirteen of them to modify a noun, only two or three of them actually do so in a normal expression. We can easily recognise these adjectives as adjectives if we put the adverbs ‘so’ or ‘very’ before the word and that word sounds ‘sweet’ to the ear. Let’s try – very good, very intelligent, very round, very colourful, etc.

So, what’s the matter with using adjectives in our stories? Adjectives are shortcuts of expressions. They take the reader for granted and disrespect him into the bargain by assuming that everybody’s definition of good or beautiful is the same. Good or beautiful are relative terms. Therefore, you must plod through the story as you would a normal thoroughfare and take your reader through the plodding as well. What this means is that instead of telling your reader that the girl next door, Ada, is a beautiful girl, use nouns and verbs to show her beauty – describe her eyes, her nose, lips, cheek and her hair and compare these features to a favourite delicacy or pizza or whatever gives you satisfaction or happiness. In doing that, you evoke or show the quality of beauty, rather than just plainly telling the reader that the girl next door is a beautiful girl.

Ditto for the adverb – it is defined as a word that tells the manner in which an action is carried out – and this manna has been found to be another reason why some of our writings have been described as puerile and telling. But the other two – the nouns and verbs, aka the subject or object and its predicate, are different.  In fact, nouns and verbs form the basis of the definition that literature is life, and that drama and poetry or prose are its imitations. Nouns and verbs form the basis of a key element in all writing – the presence of conflict. Put very crudely, John wants this, Peter wants it as well, and they fight to get it. In doing this, even though you may not have mentioned the words, ‘aggressive’ or ambitious’, the reader easily deduces it. What the reader deduces and what you mention are two different things. Between what the reader deduces and what you tell the reader is the difference between telling and showing. When you use nouns and verbs, the emotions you try to evoke become tangible, almost like things you can feel and touch.

So, when we tell our stories, we can only show our emotion and articulate the presence or absence of conflict in our lives. This we can do by the sparse use of emotive words. Saying that a woman is beautiful is telling and a cliché but saying that her eyes are like flowers that open up to you every morning as you wake up immediately evokes a tender feeling in you – whether you’re American, Isoko,  Fin or Indian.

Adjectives and adverbs are in themselves not totally bad in telling our stories, particularly if they are used predicatively at least. There have been instances where consummate writers were successful in exploiting the weaknesses of these words and used them as sources of strength. But this becomes a matter of style – in deliberately using those words as a matter of choice and as a strategy to draw attention to the words themselves and not to the emotions that the words convey. If you are not consummate as these writers, my advice to you then is to first of all focus on the verbs and nouns and less on adjectives.

The History of Violence: Poems by Abigail George