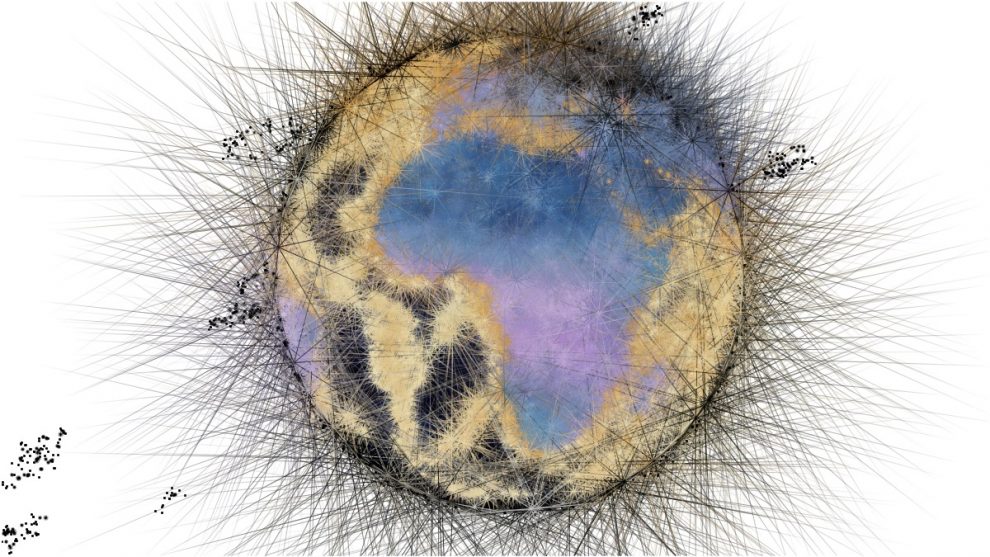 in Africa, the kaleidoscope never stops to spin,
one hand sweeps away a Hutu home,
like flood surreptitiously snaking into the crevices of a broken sty,
after a July shower.

the bight of Biafra was a lone isthmus between two divides,
of death and survival,
playing host to blood-starved voyagers,
who, like chameleon, suck out juice off of their own brothers
down at Asaba bridge;
and the macabre dance continues to survive many deaths.

Buni Yadi is a stale tale told on many yesterdays,
it is a dark revelation playing out in fresh daylight,
starring punctured limbs as actors as they slip beneath the curtain,
and it climaxes where the baby is hung
because he came in two bodies.

beyond the pile of naked ivories,
there’s a song in the firmaments,
paling off the resplendence of a Rwandan sun,
but the night too is dark and full of terrors
because here, moon is a blind bat
that litters the Milky Way with slivers of black broken stars
and here too, the sun runs out like fuel.

in Africa, the kaleidoscope never stops to spin,
one hand sweeps away a Hutu home
and makes a chopstick of its debris,
carefully picking on stars lying sprawled to light up this dark –
this Africa.

rains are promises made when drought took the shape of man
and became a prophet of doom,
it told of little fingers and drums,
it told of dance steps that were practised but never displayed
because old men were too busy to watch the play,
then, we die within ourselves and resurrect after four years of reign
and then little fingers do their magic again,
“it will soon rain”, four grandmothers had said before their lanterns died without fuel.

child,
do not fret if your mother wears the color of rain and beats you into a purple pulp,
do not fret if the sirocco borrows your body and pours your father’s ships into a glass cup,
do not fret if these dripping drizzles become like slivers of bones and wears your head like a crown,
even Jesus wore one too,
so be happy in your tribulations, because your reward is here now on earth,
in a sac possessed by your own djinns, nibbled by scarabs,
inside it, you’ll find yourself sprawled, waiting for the latter rain,
yet chasing it.

children are taught to chase the rain
artfully masqueraded in a melody etched
in lofty rhymes and rhythms
because children are fickle as poetry;
but then, the rain is something cool, something that brings you ease,
but children do not have a mind of theirs, so they do not mind
to sacrifice ease for a sachet of yoghurt and biscuits,
and chase the rain after four years again,
so their voices can be muffled by the whirring winds,
and their innocence tethered to stillborn dreams of rain.

a child never grows old especially if he has never seen rain,
he only does not grow younger either,
he’s the grey line between two generations,
to tell them stories of drizzles and promises of rain,
only rainbows and metaphors of freedom,
of old men with cartons of biscuit,
and a rusty piano and a band of children
who never really sang the freedom song.

My name is Olanrewaju Moses. I am a law student and writer from University of Ibadan. My poems have been published in Writers Space Africa Magazine and various anthologies across the globe.

The Dome of Ants: Fiction by Victor Chukwuemeka Azubike

Olurotimi Osha
We use cookies to ensure that we give you the best experience on our website. If you continue to use this site we will assume that you are okay with it.Ok