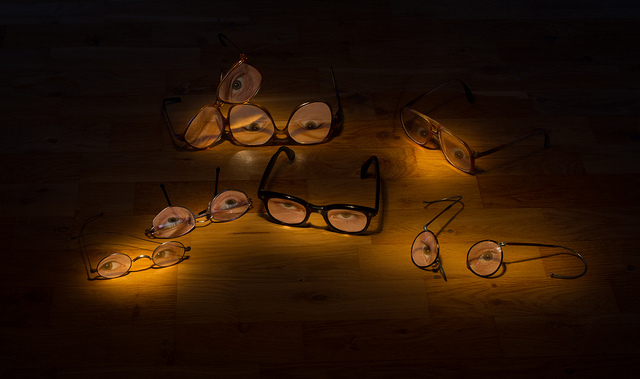 I see the eyes looking through the darkness, only it is not some dark space but there is a whirlwind that these eyes look through. I see the same eyes eyeing something at a distance with a compassion that cannot be equalled. They see some light at a distance; they see hope and marvel at something that lives within them, but at a distance still.

I find that I am a part of something that is neither within these eyes nor at a distance. The eyes are a part of me, but I cannot say which part, where they reside. All I know is that my psyche is filled with something that has more life than the breaths that move in and out of my lungs. I am a part of something magical that fills my mind with wit. It is magical but it is neither in thought nor in spirit. Even though I am a part of this something I cannot name, my mind, my heart is filled with some element of light that lives in this dark filament that has no time and no space. But I see the very eyes through this motion of the whirlwind moving at a distance that has no space and no time. Someone said the spirit feels more pain than the body that it is carrying. If someone causes me pain, the spirit feels more pain than me; and when it seeks revenge on that person, on that body; it surpasses everything I could have done or attempted to do to that person. It doesn’t inflict pain as I would, but it denies him or her an opportunity to be happy, to be whole, to be self. The spirit takes his heart or her heart into its dark spot, and takes it back to a time when time was only a whisper, a celebration of something not yet natural. I find myself through this confusion of the whirlwind and the eyes that look through it. I find that I am with the eyes that live and see where there is nothing to see. They embrace time and space before they are born, and they, like me, see something that God has put in the future; even though the future is not yet born.

The eyes that look solemnly at the distance are the eyes of God. They look at a part of something that belongs to the heavens, but resides on earth. They look far into a distant space, a distant time that has not come forth. They look at a part of something that belongs to them but a remembrance away. They look at something that is a part of memory but that live in heaven but on the day is found on earth. But the day that we are talking about is only a whisper, a memory of something not yet conceived by these eyes. But they see it still. They look through some element of wonder that is magical but elongated and elevated by the same sensation and the same memory that lives with this thought. But the same eyes found from the dance and the flipping of wings of birds, big birds that fly high show and demonstrate the majesty of God. I find that from the eyes that look far into the distance, my life is also as distant as the same objects that are looked upon by this magnetic eyes that pull everything to them. There is no voice; there is nothing except magic and wonder at what these eyes see. They pull like magnet everything that the body that is carried, and contained pursues. But it is not only the body, but the mind that seeks better and cries the tears that compels these eyes to find themselves through this whirlwind. But they see far into a waiting universe or heaven where everything is made. I hope as the body to see as far as these eyes can see. I hope to be as sure of myself as these eyes are of themselves. But then again, heaven is waiting, and heaven knows itself.

We all make choices. There are always choices open to all of us. But sometimes the choices open do not suit the body. The same lens that the body uses is from these eyes that find for me the path where there is no path, where they see in the dark. But an essence of creation, the very nature of God and maybe these eyes are as solid and as sure as heaven is silently observant about everything. We seek honour in places where there is none, we look for magic where there is darkness and we look for fish in the sky, or maybe birds in the waters. More of life is lived from the mind but we know the truth that we need to live from these eyes that see far into the fading darkness and into the fading universe.

I have lived through the same essence of time where nothing and no one lived with me. I lived and saw through the eyes that looked in the wilderness of darkness. I was known to be as happy as the birds that fly high in the heavens. My happiness was cut short by something that threatened to paralyze me forever, but these eyes saw far and told me of what they saw. They saw me happy, content and glorifying the same elements of loneliness and uncertainty that threatened to cripple my life. These eyes saw far into a waiting future and they saw my life getting better with every inch of solid attention to the memories that shook my body. But the eyes do not tell me anything, they want me to know that they are there, in attendance, in memory and in lighting the path for these visible eyes to see the enemies that may try to maim me, murder me or even kill my inspiration to move forward. These eyes, these eyes are as stable and as attentive as the light they provide for the body. But one memory of these eyes was made true when the darkness occupied everything in the horizon, the whirlwind was as hostile and it was rushing to some unknown destination but the eyes kept fixed. They are the eyes of my spirit that fights harder than me when fought upon, they get angrier when they pass through the storm, but they never lose sight of what they see.

It is in this respect I pay homage to these eyes of God that see for me the path and see the light in the dark; even where there is no light. It is in these eyes I pay my respects to the truth I see even when everything seems hopeless. I see my life through the eyes that see in the dark, the eyes of God that see for me the future and the light that lies waiting. I see my fluid future solid today expanding into something that is forever solid because these eyes can see it, even if it has not been lived yet. These eyes can see the future even if tomorrow is not there – yet. The only thing the eyes cannot see is the same eyes that look beyond the universe of clay and water; they cannot see themselves. But the truth is that they see not themselves but the same lens that lives with them as one entity, as one memory, as the same pair of eyes.

A Frog’s Home Is Called A Pond: Flash Fiction by Okwesili Bryan Joe