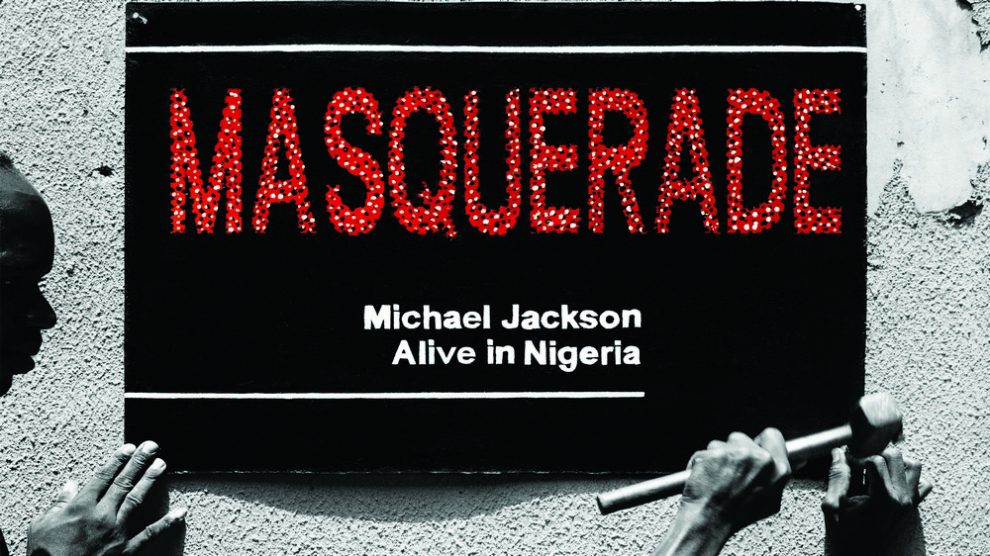 This book is a fraud at first glance. The title, Masquerade: Michael Jackson Alive in Nigeria, warns any savvy reader who is old enough to know. The formerly slightly chubby, afro-haired prodigy of The Jacksons and then reborn twiggy, stringy-locked solo artiste was never in Nigeria all through his reign as king of pop for decades. He was in Senegal before he died years ago, visited and performed in Cote d’ Ivoire, Egypt, Gabon, Ghana, South Africa, Tanzania, Tunisia but never Nigeria.

Even so, readers find MJ, embroidered jacket and all, arms spread on the tarmac in Nigeria, though the place is not specified. The year is also unspecified. Too bad the singer is all alone, apart from three security detail, not his but airport staff in the background.

If this is a joke, you hope not to see more. But there are more, all through the entire publication; one of MJ in his signature attire on an okada; another of him suffering from, presumably, post-concert exhaustion, splayed on a bench, a Ghana-must-go just beneath him. He is tended by the Ejiogbe Twins in their cowry-beaded outfit who the African American singer probably never heard of or ever met. (The twins feature prominently throughout with the eccentric performer’s tour in the book, ultra traditionalists serving as a counterpoint to the real MJ’s westernized orientation.)

Can any scam ever be more obvious than this, particularly in a country notorious for perfecting and executing astonishing varieties of fraud? 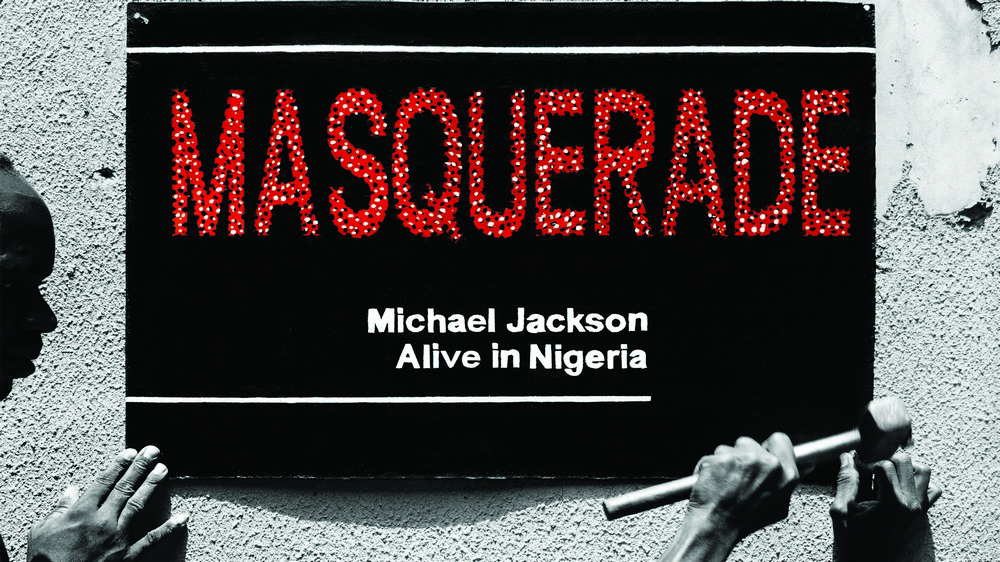 Masquerade is the result of a collaborative work by Owen Logan and Uzor Maxim Uzoatu. Logan is a Scottish-born photographer while Uzoatu is a Nigerian journalist. The collaborators almost certainly experienced what would have amounted to a rip-off in publishing history. The idea for Masquerade was bruited nearly 15 years ago, and a publisher, Steidl Mack, was approached. The London publisher accepted the script quite alright but “stopped communicating and unceremoniously dropped the idea.” In the meantime, the real MJ died and only after did the publisher resurrect the project.

Look deeper in Masquerade and the lopsided relations between whites and blacks stare you hard in the face, sometimes embarrassingly to a black reader. To Logan’s risible shots, Uzoatu provides a thought-provoking script about the great rip-off, often written with a piquant wit.

A Nigerian writer and poet laureate, Tade Ipadeola, once mused at a literary meeting that Africa has always given to the rest of the world, from slavery through colonialism to the present day. Apart from the traditional European colonizers, Asians are establishing their presence on African soil, particularly the Chinese who are roaming free in Africa, buying up swathes of land everywhere from Sierra Leone to Gabon, filling the continent with all sort of ersatz electronic gadgets. There is no other continent in the world where that is happening. It is clearly, as Fela famously put it, second slavery.

African elites have partly been responsible for such total domination by the Western world. That is the subject of Masquerade, and viewed against that background, the reader understands too well who the modern-day scammers are.

In local parlance, for a scam to succeed, there must be a mugu, a fall guy. It is to the fall guy Uzoatu addresses his epistle on the very first page. “My Dear Mugu,” he begins, “I know you are dying to be rich. Die no more and live, for this letter will make you rich beyond your wildest dreams.”

It is on this paper promise that the script man launches into a litany of woes that have shaken the Nigerian nation and, by extension, the African continent to its very foundation; “I’ll let you into the spellbinding detail of my deeper-than-skin bond with Michael when we meet at the Waldorf Astoria to spend a bit of the huge fortune accruable to us from this Nigerian saga,” the writer continues on another page. “The main rule of the Nigerian game is that once a deal clicks here you will almost instantly become richer than your peers.”

Masquerade, as Logan points out, was inspired by Frantz Fanon’s book, Black Skin, White Masks, 1967. They settled on the personality of Michael Jackson because he epitomized the “perfect star for our spin-off. His career seems to personify the rise to power of the decadent black elites across newly independent African nations who chose to go on serving white master.”

Fanon himself stated it all too starkly. Black Skin, White Masks, the author wrote, was used “to explain the feelings of dependency and inadequacy that Black people experience in a White world. That the divided self-perception of the Black Subject who has lost his native cultural origin, and embraced the culture of the mother country produces an inferiority complex in the mind of the Black Subject, who then will try to appropriate and imitate the culture of the colonizer. Such behavior is more readily evident in  upwardly mobile and educated black people who can afford to acquire status symbols within the world of the colonial ecumene, such as an education abroad and mastery of the language of the colonizer, the white masks.”

Even in their own world, black people, elites, especially, often behaved unapologetically like the former colonialists. As Logan contends on a page he calls “Credits and recriminations from behind the scene,” “The African elite did not become white but in other ways they went even further than the king of pop in reinventing and aggrandizing themselves.”

For example, during the trial of the infamous self-described Field Marshall of Central Africa Republic in Bangui, Jean-Bedel Bokassa, the deposed ruler arrived in court decked in a field marshal’s uniform, complete with epaulettes and gloved. He was prouder of giving the classical salute of De Gaulle whom he venerated.

One thing the reader cannot understand about Masquerade is who takes the blame most for the great scam. Is it the stupid African who apes the colonizer or the colonizer who plays on his stupidity? After all, to perpetrate a scam, there has to be a veneer of greed in both parties.

The book is “an allegorical tale about neo-colonialism,” Logan insists. “It is a far bigger and more profoundly damaging rip-off than all the “419” letters in the world put together.”

The accompanying photographs in Masquerade, all but one shot by Logan, tell a story of Nigeria. For instance, there is a squashed up vehicle lying by the roadside with a telling caption: “A hero made for Nigerian roads.” In another, MJ is seen upside down almost touching the screen of the Benz car in which military head of state, Murtala Mohammed, was shot. There are portraits of his predecessors and successors. The rider is, aptly, “Michael drops in on fellow stars of stage and screen.”

If you think Logan and Uzoatu have really taken you for a ride in Masquerade, take heart because this is deception based on reality.

Wake me up when it is Time: Poems by Anthony Ominiabohs

For John Pepper Clark-Bekederemo: Triumphing Over an Imaginary Tragedy

A Walk through these Empty Rooms: Poetry by Abigail George

We Signed Our Death Sentence: Poems by Wafula p’khisa