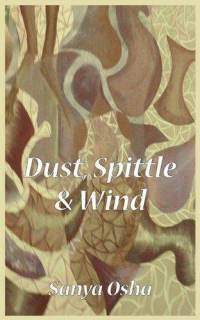 I was talking to Katleho Shoro from the Anthropology Department at the University of Cape Town about a workshop that was to be organised where two African authors were coming to speak about their novels. When I left the building I had the book Dust, Spittle and Wind (2011) in my hand. The title of the book already captured me. From these words my mind turned inquisitive. It could just barely offer visuals.

In the train to Fish Hoek that day I sat and thought about the dust, I pictured the spittle and wondered which wind direction inspired the book. Could these winds be persistent, strong and irritating? What we refer to as the black South Easter in Cape Town. I could not wait to learn.

Looking through the train window, I noticed things I had forgotten to look at. We passed Claremont, Wynberg and Retreat. All these places were different and had their own stories to tell. Soon after that I was sandwiched between a mountain and a sea on my left. When I had passed all this scenery and left it behind, I got home and opened the book by Sanya Osha.

In the book I met Olu Ray who is the main character that the author follows. We are first introduced to Olu through learning about his dilemma. He had been struggling to make the decision between going to the border to do the national service or remaining in his home town. Though the reluctance still poised in his mind, in the end he decided to go. How does a soldier fend in a land that seemed as foreign as a dry place in the moon? By this time I had developed a drooling sensation to carry on and uncover these questions.

What would Olu go through? How would he experience this different part of Nigeria? I cared because I had come like the dimensions of the character in Olu. He was human, had things he feared, didn’t claim to be the master of everything (even in his mind) and had strengths and weaknesses. He came from the south of Nigeria and had fears about joining the military camp in North Nigeria.

In the military camp Olu came across many identities that carried different ideologies. In a quest to find a home he was rejected by homosexuals for his rather inconsiderate ways. In one instance Olu spotted,

“….he had a camera and he asked if he could capture their most climatic moment for posterity. Gerrout or I’ll give you a dirty kick in the balls.”

This happened when Olu spotted a moment that he felt had to be immortalised. It was not taken very kindly. It is in this way that we are able to diligently deal with the taboos of society.

Amongst the ideologies were also those of the poets who poured their hearts out about their romantic subjects. The poets only tolerated him. Olu was no poet in the making, yet the poets’ yearning for love was a subject Olu soon came to understand. He came to understand its cry for he too struggled to find love in the camp.

When the time set to be on the site ended, everyone needed to make a plan. Hazy, together with Beatrice got redeployed to places of their choices. These girls knew where to focus their attention around sex hungry men in superior positions. The post-coital transaction was a life of luxury for the girls.

With nothing to ‘offer’ and no ‘power’ in the sexual politics, Olu saw the girls to always be in a rush. They would not give anyone who had little money or no money time of day. Olu failed to strike a sexual relationship even with Hazy who liked his gentleman personality. How does then Olu’s relationship continue with the ladies around him? Where would he be redeployed with little influence or no power at all to manipulate the decision on where he would be sent?

It was in the time of a major change like redeployments that Olu decided to tour the surrounding area. He went on a walk about, got a ride on a motorcycle and ate at a food stall where hungry kids hovered around for leftovers. This was to be his luck in meeting a friend in Hugo, another soldier. Olu felt they had some things in common. They were both travellers on a strange land. Olu soon learnt that Hugo’s passion lay in creating catalogues of erotic impulses. Could rejection from girls have led to Hugo working on images that aroused sexual desire?

Part of what antagonised Olu was the norms and values of senior officials in the army. These were some of his inner conflicts. He felt a bit lucky when he got posted to a state-owned bank. The conditions there were better, though they did not fully fulfil his preference. It was be here where Olu met Friday, a joker and pleasant man to be around. He started to thoroughly enjoy the company of Friday and other flat mates.

However, their brotherly love in the flat was not going to last for long. Two girls brought a letter from higher authorities bearing the strict instruction that Olu and his friend Friday needed to vacate their rooms to make space for the girls. Voluptuous girls had been pulling out flat occupants by getting authorities on their side. How does a serving soldier continue to navigate life in North Nigeria? I remained eager to know.

Olu moved to town where he got a nice room through a well-connected man he had met at the bank. He enjoyed the town, also spending time at bars that sold hard liquor. In these bars, sex workers were readily present. His times there led him to meeting Oskar who worked for a state-owned newspaper. Through visiting Oskar at the quarters where he lived, Olu met Stephanie. Olu got struck by Stephanie’s physique, he found it to be pleasing to the senses. He also learnt that Oskar worked on a project on female eroticism inspired by Stephanie, the likable sex worker.

After the death of Amaka, Stephanie’s friend in prostitution, one would have thought that she would stop her work. Stephanie too had a bad experience with one of her clients that died after an engagement with her. Specifically, only after this incident, Stephanie vowed that she would not continue with sex work. She was too frightened by what had happed. How does she then live a life as an ex-prostitute? What was to come?

After rejecting many men, she fell for Ahmed Zoro, a brigade colonel. He gave Stephanie ‘the life’, she had things of luxury she previously could not afford. The colonel left Stephanie alone for long periods at a time. She became bored and invited Oskar. After many days of enjoying each other at the beautiful place the colonel had made available, things turned very bad for Stephanie and Oskar. When the colonel found out that Stephanie had been cheating on him he ordered his men to shoot Oskar and leave him to die.

Determined to change her ways, Stephanie struck a deal with Olu where she would source work and Olu would tutor English. Hajia Habiba, married to married to a rich civil servant is his first learner. Things develop between the instructor and the learner and Olu finds himself in bed with this most beautiful woman. Tasha, who is Olu’s second learner, is a bit hard to penetrate. In the end Olu sleeps with her too. At this stage he cannot believe his luck.

Owing to the wish of not wanting to give too much away, I stop describing what happened in the story. Significantly, the whole book has a poetic flow that works for both a teenager and an older reader.

When I thought about my observations in the train on my way home that day I remembered I had read the blurb at the back of the book. “In Sanya Osha’s telling, society is on the verge of irreparable breakdown but manages somehow to pull itself back up from the abyss.” These words as well as from having read the rest of the story reminded me that with changes in our lives we are offered the opportunity to discover ourselves. We meet the side of ourselves we would never know without change. The personalities that we meet awake the unconscious side of ourselves.

Furthermore, it is the high level of verisimilitude that kept thinking between the pages. The plausibility of Sanya Osha’s story telling remains unquestionable. This is my sentiment after being captured by a work of art that awakened the mother of suspense in conflict. By this I am referring to the texture of the story, it is that of the truth. Dust, Spittle and Wind is Osha’s story in which modest yet intriguing hurtles of climaxes lead to the main one at the end.

The “bitter-sweet journey of loss and self-realisation” as the subject statement is immaculately captured. The reader has been respected to the pleasing extent that issues that would normally be hidden, forbidden and repressed in society are brought to the fore and discussed. Osha is not scared to go there, he writes about some of what I think but am too scared to say.

I had the pleasure of meeting Sanya Osha in a workshop in Cape Town. He has an awesome presence and is a good listener. He is a soft spoken man with passion for honesty – he told us that he is a failed poet. However, I would not quickly associate the word failure with him.

This book still rates high in the books I have read. The one small issue I had was that I found the length to be a bit short. It is a thick plot that the author could have worked with to make the book over 200 pages.

I would recommend this book for the teenage and older reader. The reason for this is that the more observant we are as individuals, I feel the more we see our sense of being in the world. The display and discussions of societal issues in Osha’s work quenched the need to initiate dialogue about the very issues.

Sonwabiso Ngcowa is poet based most of the time in Cape Town, South Africa.

At the Foot of my Ten Fingers: Fiction by Abenea Ndago