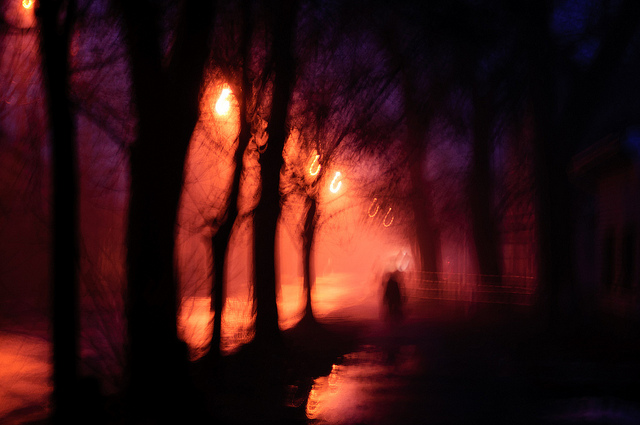 Horde of demons quicken my flesh
as I wipe the nightmare off my eyes
A new me, I want to be. A new me with loads of strange bedmates
Reckless spillover of morbid cleavings, romping good demeanour
Maccabees for the revered.
A joggle before broken glasses and cans, I partake
Tripping off lights inside the dark, switching the Powerhorse

I’m about to release weakness and set Genie free from this bottle
The one beside me take up a chronicle
and reads meaning into the situation I’m stuck in
Some glory from lost religion-
a golden cross hang for suicide around my neck
The bar slab ordained for the late night sermon:
“Hear, ye! Hear, ye!” muddled with vomitus
Aztecs mask a buss on the scalp for my drunken halo
to reeve a sombrero across impaired vision

Stupor, lost in translation buried beyond the flaming jaws
Reek of the dissident locked in a gulp steaming up the flabby liver

One more for the road
Nocturnal crawler; the city drain till I pass out
or the morgue in a passing?
Grinches catch an eye, holding unto my liquid like a bride
If we depart this misery, we depart a couple

I seem so lonely in this world, but my drink gets lonely too
I lie to myself: I’m not an alcoholic, I only fancy the brew

I found the path to hell as a child
They slept on a midnight sermon and dreamt the same
The walks of darkness stripped my innocence down town
A corner in my heart purged the guilt at the street corner
Paradise blinded our adventure while we strayed on the highway
Till we witnessed the light in a scripture
The coptics had their way
The Pyramids buried the wisdom fruit
At the sea, we birthed truth
We honored the scriptures, bowing to the silence
We painted an eye between our fortresses
The third eye blasting the bugle of conquest
Masonic feasted on the remnants at the altar
Our voices reduced to whispers
In temperament, ancient wisdom became doomed
A barren hunter before a herd of beasts
A tempest rising through the rainbow;
beauty muddled in a tapir’s musk

And sang the joys of years forgotten
“You bloody fraternity!”
“You deceiver of mankind!”
We awake to the preachings of a dreamer
He saw hell in a twinkle
Before the sun arose to reveal our folly
He spoke in fiery tone, as of the demons he proclaimed
As of the shackles made of torture and torment
Multitudes conveyed at his unpolished feet to learn fear
Words riddled in his crest
A battle scar of his many tribulations in Abyss
Till he died
And his revelations hurt no more
His bones crossed, his skull arced
bearing our new insignia
A symbol of knowledge and death

ONE FOR THE ROAD (TO NOWHERE)

Just left church, the cassock soaked in the bartender’s sweat
I kneeled for communion before the altar, before the bar slab.
Readings were by Prophet Daniel;
he spoke without the presence
of his lions like Ras Tafari’s pride

His words warmed our souls, down our throats
“Amens!” bounced off the church walls.
A man cried out, “Preach on, Jack”
till he was slain in the spirit-
Ushers ran to get him

We are here for a reason:
Death has been knocking loud on our doors
Unbelievers say
“They’re going through a mid-life crisis”
25 to life

What is life?
You toss a coin
and get tossed 51 years in return

Daniel reads on, flipping pages-
Another shot for the next scripture,
another round for the congregation
For each page, our cups run over
“Halleluyahs!” belled off croaky voices

Ushers keep their hands
busy with baskets of offerings;
monies dropped in
We pay for our blessings, for another miracle in a drink

My girlfriend is a doctor, a medical doctor
A doctor, a doctor:
That helps to count my steps, I count ‘doctors’

Minutes ago, I left her drowned in her tears
She says I’m hurting my liver and her
I’m rather confused

On her front yard, a bird’s poop dropped on my head
Resurrection to my liver, good luck to my liver!
She says it’s a bad omen. I smell envy.
She’s from a different state;
where I’m from is a state of chaos and destruction
So we drink our sorrows in pints
We drink in pubs-
Pubs in form of religion, workplaces, bank statements,
TV shows, chitchats, sports, families

We drink till we sink into oblivion
Kill them all, we drink our pains
Slaughter them up North, our drinks are served
Gulp!

“Doctor, doctor!”
We have a patient with alcohol poisoning
Pump his blood with the IV of fear
Let the North, South, East and West know such fear

One for the road
‘cos this might be my last.

Udochukwu was born and educated in the ancient city of Ibadan. A graduate of Economics and Development Practice from the University of Ibadan, he is an ardent follower of Hip-Hop and Manchester United FC. He has written for notable literary and contemporary blogs including AfricanWriter.com, SankofaMag, TheNakedConvos, TheSarcasticCentre, and others.

Of Grief-Poetics on Place and People: Rasak Malik’s Achebesque Death Knells In ‘No Home In This Land’