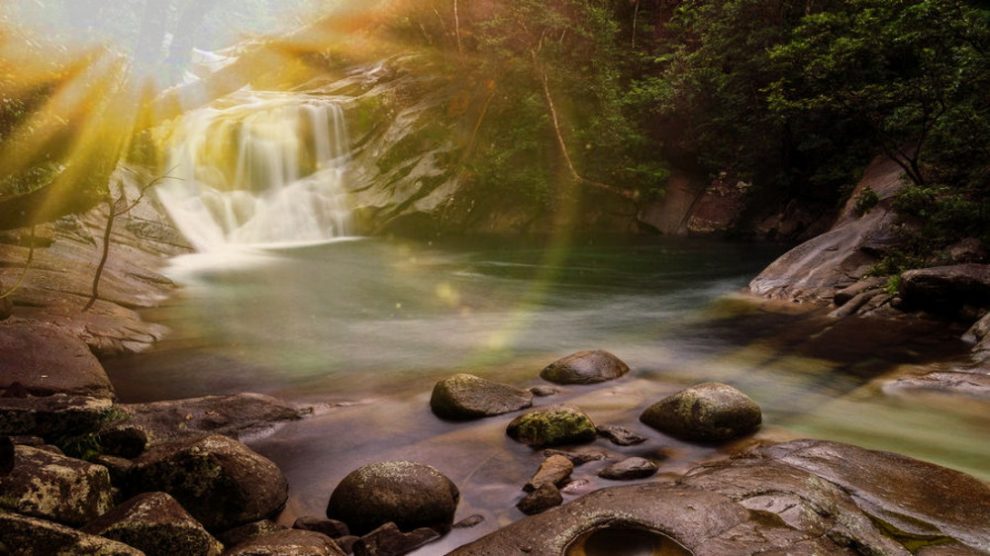 Life, the one word Father used to describe the river flowing between my toes. In awe I watched it froth, taking note of the rocks jutting out, worn smooth by years of constant battle. He hadn’t used the word “life” in the manner it currently bounced around my mind. Rather, he had said it in our native tongue. Well, he’d say it was ‘his’ native tongue. Even now I smile, my little package beside me, mind returning to the first time we were on this river bank.

‘Son, I called this forest home as a child, much like you are now.’

Silence, the forest held its breath to hear his words much like i was holding mine. Free hand resting gently on my shoulder he continued.

‘This river you see before you was the life blood of our village.’

Softly, looking into the distance, he uttered these words. Minutes stretched as he lost himself in the past. Quietly I watched him in awe, hand clasped in his, lost in his grip. I couldn’t help but stare, each callused finger showed such strength, telling a story I would never know.

Yoruba, melodic in its sound. Sometimes he slips into it during his reverie; forgetting I understood little. Still I loved it, wishing I knew more. A wish I knew he shared. English mother and a life in the Land of the Rising Sun had shattered it.

An intruding thought, powerful enough to bring me back to the present. Rising, the seat of my pants now damp, I watched the water flow; conscious of my little package. A few years have gone by, still the river remained peaceful. I was no longer the child I had been, yet not old enough to lose the childlike wonder I felt my first time here. Gentle rumbling drew my gaze down, my body spoke to me. Cautiously stepping into the river I felt the current take hold. One with the river. Statue, I became, all motion leaving me. Stillness gave my mind time to wander. Wander it did.

My hand no longer felt so lost in his grip. His strength did not overwhelm me as he tugged me into the churning waters of the Harmattan seasoned river. A chill went up my spine, the water reaching my thighs. Curiosity kept me from splashing back to the safety of the bank. Father held on to me, his strength defying the currents’ attempt to take me away. Leaning, he whispered into my ear.

“Catching fish here you only need to be still.”

Whiskers tickled my neck, a squeal of delight erupting from my lips. Quickly they died down as I focused. It had not been easy till I shut my eyes. Slowly the world around me sharpened and faded. Sounds in a forest I once thought sleepy and quiet came and went. Leaves rustled, courted by a gentle breeze. Wings flapped, a dance beginning in the evening sky. I could hear an antelope lapping water just around the bend, or so I thought. Even this sound faded leaving only the river and what it contained. I could finally hear them, swimming past. Time ticked away, a short-lived pleasantness. Father suddenly lifted me out of the water, a guilty look in his soft brown eyes. A voice, foreign to the forest, came from the distance.

An intruding sound, powerful enough to bring me back to the present. My hands shot out, the fish landing on the bank near my little package. Silently I watched its struggle to cling to life. Father had lied, it did not get easier with time. The river barely reached my knees now, a passing thought. Above the fish I stood, observing our simple ritual. Seconds passed, my thoughts returned to Father.

Father said, voice weaker, a shallow cough cutting him short. He held my hand. No longer did i feel lost in them. Gently I switched roles, taking his hand in mine. Calluses still remained, I could feel them, their story untold. Father continued.

With a thud his head hit the mossy bank of the river. An image of beauty and grace glided past my frozen form.

An intruding visual, powerful enough to bring me back to the present. I could put it off no longer. My fingers trembled as I gently opened the package. Thousands and thousands of miles we had traveled together; unable to part, lacking the strength to say goodbye. Rising with the lidded container in my hand I faced the life-giving river.

I whispered, lifting the lid of the container. It was where he wanted to be. Wind blew, taking father’s ashes to join the life-giving river. Through the tears I watched him float away. The river and our lives are intertwined. I’d sought and found the meaning of the last words he’d said on this river bank. One with the river. With a deep breath I gathered in my mind memories of the strength of my father and shouted.

Writing is an escape, my escape. In anonymity I share a piece of my world.