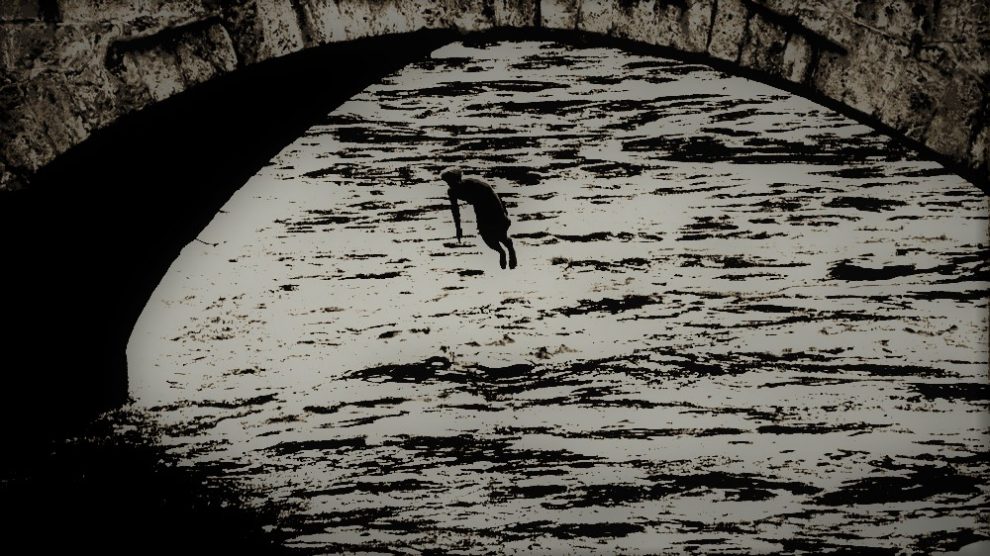 “’jump!’ The voice came again. Like some strange waterfall of murderous whispers…”

Osun river, calm and deep on this side. Gurgling. The evening is deepening, and as though it were the sea, one begins to see the embers on the face of the dusky liquid. Jesus must be walking on water in some other places. Some hands hold the handrail. Brown hands with desperately black knuckles. The wind is blowing too, tugging at his loose shirt. The soul stood, watching moments pass like a flailing kite, waiting to land at some unknown place. Beside him is a bag, opened at an end; one could see the crisp naira notes left carelessly as if they were a writer’s collection of failed manuscripts heading for the dustbin.

He heard the strange voice. But this time he didn’t look over his shoulders searching for someone he knew was never there. He clutched his ears with a force that seemed to want to tear them off his head. He must be a maniac to have heard such strange voices. Perhaps, just another benefit of being reclusive for so many seasons. The first time he heard the voice — eerie, but familiar, there was nothing in his being that could say a ‘no’ that he achingly needed. So, he’d run, holding the bag as he raced through puddles until he arrived here where silence seems to ease him.

The voice came again. Like some strange waterfall of murderous whispers. He turned back, revealing this side of his face lit up by the afterglow in the Western skyline. He could see a child in the middle of the road — hypnotized, perhaps. The child said nothing. The tattered gown she wore seemed to suggest that she is the voice in his head. But the movement of her yellow large eyeballs from the man in front of him to the money now scattered in the mud is enough to convince him that at least, he only heard them. He saw no spirits. Just another beggar.

Like BB King starting an instrumental, the voice grew again. Slowly. Just that this isn’t a piece of music. The language was not one he’d heard before. Something undefined. He clutched his ears still. But what he now hears is no voice. It’s a sound. The dismal sound of an outworn truck coming with full speed at the bend where the river crosses the road (or where the road crosses the river). The child was still there. With an eternal ‘no’, I suppose would ring him through to the other side, he dived onto the road. The child, the man, and the mad truck in the bend . . . There was a splash, and ripples, and silence.

Image by pasja1000 from Pixabay (modified)

Oni Tomiwa is a lover of poetry. A lover of every form of art and an amateur nature photographer. He resides and writes in Osogbo, Osun State. He is the winner of 2018 League of Wordsmiths. His poems have appeared both in print and journals.

Oreoluwa Oladimeji: What Would Jesus Do?