Absorbing, startling and uncannily pitched to public and private issues that penetrate the social climate and upheaval of present-day Nigeria and Africa might be the best way to describe prolific Nigerian scholar-poet, Tanure Ojaide’s new poetry collection, The Tale of the Harmattan. Published in South Africa by the prestigious Kwela Books of Cape Town, which parades a coterie of some of Africa’s already established poets/fiction writers such as Eskia Mphalele, Nuruddin Farah, Maxine Case, Keorapetse Kgositsile, and Gabeba Baderoon, in conjunction with another notable publisher, Snail Press, the book is divided into three sections and has a glossary that spares the reader unfamiliar with the terrain of Nigeria’s landscape, politics, and Urhobo folklore the headache of leafing through such a fine collection without knowledge of the references made to mythical and historical figures. 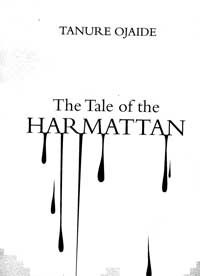 The Tale of the Harmattan is Ojaide’s fifteenth poetry publication. Part one of the book, much like Ojaide’s previous poetry collections, narrates and reflects on local issues with global implications. We are introduced to the disturbing tale of the oil saga that continues to plague Nigeria’s national conscience. Ojaide references an array of struggles for a clean environment, multinational sensitivity to local people in their business dealings, minority rights, rights of people to be treated as humans, and the legacy of grandmothers. But what makes this section of the book fulfilling is not the attention given to issues overlapping politics but the poet’s well-crafted and memorable lines. The poem “The goat song,” according to Ojaide’s explanation in the glossary section, “represents a song of anguish and complaint.” Indeed that statement is true when we examine the way he weaves sarcasm into each couplet that reflects and philosophizes the reality of living in Nigeria’s Niger delta region. The opening couplet reads, “I sing the community’s goat song/Folks wear gold over tumours of hope.” These lines are premeditated because they set the tone for the last two couplets of the first section of this poem as the reader becomes aware of what drives Ojaide’s anguish and complaint when his speaker bemoans, “And who cares if foreigners found deep/under their bare feet divine gifts of pools/and started to tap the earth’s underbelly/for fuel to blaze brushes of progress?” (9).  Other poems that stand out in part one are “Priests, converts, and gods,” “Womb-wrapped,” “Lessons from Grandma’s night-time school,” “Tale of the harmattan,” and “Oil remedies”.

Part two presents the poet as a public voice. The themes covered are both dynamic and very much in touch with events in present-day Nigeria. Yet the pleasure of reading Ojaide’s poems comes through as with any good poet’s work. With the poems in this section one can easily identify with the speaker’s thirst for human freedom, his passion for his subject matter, his reflection on the injustices carried out against the Niger delta people, their land, and their natural resources. In short, the tragedy experienced in the destruction of wildlife and natural habitat are clearly examined with the skillful touch of a seasoned craftsman in this section, which clearly gives each of the poems the universal appeal and attention reminiscent of any other ethnic group or culture whose natural habitat is threatened by oil pollution and incompetence in the corridors of power. The poem “At the Kaiama Bridge” immediately jumps at the reader with a tone and subtlety buried in the direct appeal for the protection of natural resources when the speaker cries in stanza four,

We have organized a resistance army,

declared sovereignty over our resources;

but have not pushed back the poachers.

Outside forces pillage the inheritance. (33)

In the poem “For the Egbesu Boys” the poet’s solidarity with the fight for the oppressed and dispossessed is clearly established in the lines, “For the same reason I sang praises of the Ogoni youths, I praise you Egbesu Boys in song—you cannot be/shackled from enjoying your own land’s blessing;/you do the honorable duty of brave sons—fight on”(41). Here we can see clearly the ambivalence in Ojaide’s lines while also noting his ingenious use of diction that is both exalting and gravitating. The clear message here is the poet’s support for the pitiful plight of the Niger delta region whose exploitation of its natural resources the Egbesu boys are fighting against. Other poems in this section also reminiscent of the anguish and complaint that sustain the intensity of the entire collection are “Dialogue,” “Transplants,” “Without trees,” and “Swimming in a waterhole”.

Part three of this book is sentimental, euphonious, and forewarning. Here Ojaide’s speaker navigates issues fueled by private and public concerns.  The themes covered are thought-provoking, emotional, and foreshadowing. The brilliance of this section can be seen in Ojaide’s mastery at blending oral tradition with western poetic forms.

The songs are free, yet there is a seriousness of purpose that sustains their intensity, making each poem memorable for the reader. In the fiery and angry “To the Janjaweed,” we notice and feel the poet’s empathy for the victims and his resentment for the oppressors. Written in a tradition of abuse poetry, the poet chides and derides the notorious killing gang responsible for much of the deaths in Sudan’s Dafur region. Each couplet in this poem is rich with memorable images and utterances as Ojaide laments:

May the fire you spread gleefully this way

scorch you and your family at the other end

may your patrons in government corridors

may the horses you ride to sack villages

throw you into vainglorious days…   (58)

The same emotional intensity Ojaide exhibits in this poem is sustained in the other poems in this section. The only difference is in the shift from the public to the private voice. For example, the poem “Remembering,” a tribute to a dead friend, clearly shows the dexterity and virtuoso of a poet. The images are very striking, and the last line gives the poem a memorable closing punch as Ojaide avers,

the day all alarms refused to go off

the day the clear-eyed guide lost his vision

the day the boneless beast opened its mouth

that was the day of the summer solstice when in

By the end of this book it becomes clear to us what Ojaide had set out to achieve with it. His move from personal and local concerns to national, universal, and human

issues shows how grounded he is with historical memory. Readers will enjoy this book for all it is worth. The language, though highly sophisticated, is simple and reminiscent of the poet’s opus. With a poem that addresses human issues such as “To the Janjaweed” already nominated for a Pushcart Prize in the US, this collection is bound to win many laurels. With the publication of The Tale of the Harmattan, Ojaide has become part of Kwela Books’ coterie of major authors singing Africa’s song from the local to the global.

Dike Okoro, a critic and scholar of African literature, is a professor of World Literature at Olive Harvey College, Chicago. He received his PhD in English Literature from the University of Wisconsin at Milwaukee and both his MA in American Literature and MFA in creative writing from Chicago State University. He is the editor of three anthologies of poetry and the author of two books of poetry. He is widely published as an essayist, reviewer, poet and short story writer.

Awanto Margaret
We use cookies to ensure that we give you the best experience on our website. If you continue to use this site we will assume that you are okay with it.Ok