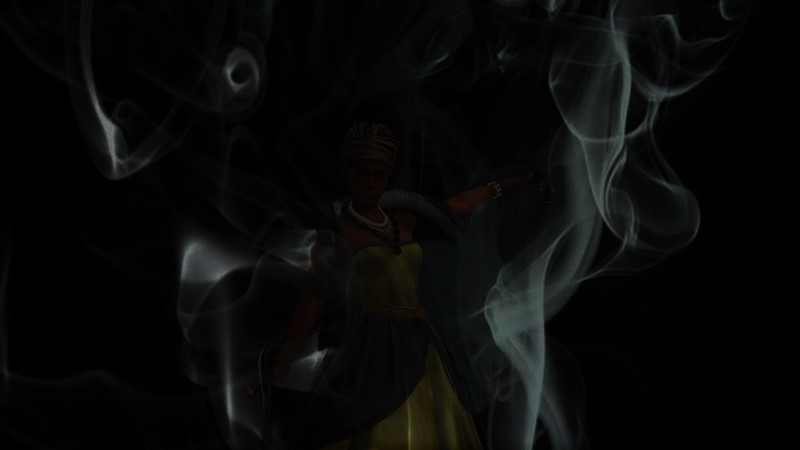 NOTES ON THE SANGOMA

I too, I want to tell this; ‘am an expert on comets, long distance writers, anxiety and the stars’ ancient twirl. On poets who sing and dance when finding themselves in a rut. The minority of them who belong to greatness long for the ash and charcoal of power not the struggle for tomorrow. This small minority of futurists longs for the military touch that melts the moisture that comes with punches. Choice that comes with tears and silence. Expectation. The blood spilled during war in the river. The wide journeys to reach humility. Grace. Sacrifice. This minority. This minority is burdened with life. Visions of the burning bush in the wilderness. Masters and teachers. You hurt. I hurt. We all hurt. The soldiers, well, they hurt. Wives, mothers, daughters of the minority hurt while the world as they know it collapses around them. While their men fall to the ground with despair in their eyes. The minority are downhearted. While nature is masterful and the seasons transform rage into instructions that can be followed. So,
let me undress your rage. The sangoma listens to me. Her eyes moist at the corners. Still she says nothing.

NOTES ON THE CONSTELLATION IN EUR EYES

It was your world, this,
well it was your world
and now it is mine.
Volcano people are found there.
The transparency of
winter light. Its profusion
engulfs me. Compels me
to write this. The wreck
of the morning unwinds
at its own pace. So does
the pigment of the lit earth.
The ends brightening of
the blue sky. The staring
and hiddenness of lovers
slowly become a part
of belonging, reality, normalcy,
history and even fiction.
You enter my world wordlessly
like ritual, heritage or
inheritance. Before he,
the boy, Julian is ‘stolen’
from me he becomes a memory.
This is the pleasure that
brings us closer together even
Closure so let pleasure linger.
He does not know me
when I am angry. No,
he has never seen me like that.
He has never seen me
happy and sad at the same
time (in other words
manic). Frustrated, guilty
or high. He has always
seen me composed though.
I just want to belong to
this world. Same as the next person.
Same as him. I also wish for
grandchildren but that’s
a poem for another time.
Another place. Other soil.
Another shine in the windowpane.
He is still a stranger to me.
The boy with magic in his eyes.

NOTES WRITTEN ON FRIDAY AND SATURDAY

This is just about a small poem
that can be carried in a fist.
It has its own adrenaline rush.
Its own peaks and troughs.
This is to remind me about
a great woman. My mother
who was once my father’s sweetheart.
My mother who was once
my maternal grandmother’s
daughter. Now we stand behind
her and the survival of a house
complete with family life.
Dissecting history, the details of it swathed
in a fog and the grains of
which are caught in a storm.
She gardens. She’s sly. She’s warm to the touch.
What was she like at my birth?

Happy? Satisfied? She likes being
close to nature. She is at ease
in that environment. Vulnerable
to the exposure of the sun,
the rain and the elements. Yet,
there are times when her eyes
seem to glint and say that I am
in an old woman’s way and my mother’s
silence is like a ritual that seems
to fret, glide and swim across
the bridges of sad wishes. The
edges of awkwardly built streets
and alleyways. Their physics
and chemistry and I think to myself
even her ancestors must be
something bigger than I am.

She is the flaming red-haired.
Also known as Norma Jean Baker.
Also known as Marilyn Monroe.
The mining of diversity comes with
you welcoming tigers.
Parading them at the zoo.
Your beautiful fabric of bone and
skin. I remember your red
lips. The same way I remember
petals or fruit. The climate
changes now in the environment.
Trees have bare skeletons.
The vultures have gone away
now and so has the lizard’s
flesh. Lungs smiling with
roots are all that is left now.
You were never married with
those children. You never
had that sunny road. You
were married to your guests.
Despair in your eyes. Never
the invalid. You melted the
blue sky that was as pure and
healthy as water. Oracle,
my wish was this. That you
would be called a paper tiger
empress and that strange anguish
that you felt sometimes in the
world would disappear. Wise
shaman angel let the others
call it angelic. A ghost’s potential.
It was after all just the men
in your life talking. You’re
gone now from this world.
Folded moons, the sun on edge.
All the ingredients of a movie
star. You never had origami
spotted hands. In your mother’s
house estranged beasts are fed.
They glow while the rest of the
world contemplates them and your
demise. You have peace and rest
now in your fragile bones.

THERE WAS MISCHIEF HIDING IN PLAIN SIGHT

Two men appear in the distance and moved
towards the trees where they
would be hidden from view. Another
followed them after ten minutes.
Curious I guess. One man sucks another
man off under the winter trees.
Is it an accident that the three men meet like this?
After ten minutes one man gets
up and walks in the direction of
the grassy bush. The other man
waits until he disappears from view.
The third man shows up curious.
Heavens! What happens next? I do
not know. I go inside the house. I stand
in front of the window. Waiting.
Watching. Not seeing any movement.
Something slowly dies inside of me.
Something withers away inside my soul.
Reality then morphs into historical
incident. It’s like the men have dropped
off the face of the earth to find
themselves in hell’s playground.
These men, don’t they have souls?

Where Rivers Sing A Song: a Poem by Segun Akinlolu (Beautiful Nubia)