A trip to Kaduna and I have taken with me a four-thousand-year collection of Chinese poetry, The White Pony edited by Robert Payne. Trafficking on the bumpy Nigerians roads, I have intransigently clung to the delicious pages.

Arriving at Kaduna for a wedding, I find my host to be an old family friend. After two nights, my literary mind has begun to search for readable literatures. The eyes scan. And two neat copies of From a Poem to its Creator peep out at me amidst a concourse of old newspapers, plain typing sheets, business magazines and almanacs. Complimentary copies – my host was a former classmate of Odoh Diego Okenyodo at ABU, Zaria.

A copy immediately becomes mine.

At once, I set down to task. I look at the year of publication – 2008 (still recent), I look at the publisher – Hybun, I look at the appraisals of the work – three (one from Weekly Trust), one from Public Agenda and the other from the poet and critic, Ahmed Maiwada. 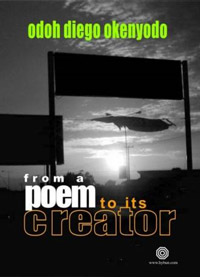 From the biographical data at the cover, I learn as well that our poet is not the isolated intellectual: he has held several leadership positions right from his undergraduate days. At once, he cuts in me the image of the poet-activist.

I have been racing through all these info in seconds. Then, I turn through the pages of his poetry and see craft. The more I read, I saw perfection. But the more I saw perfection, the more a hacking worry lodged itself in my consciousness. I savoured the pages, the music, the inventiveness, the creativity but then, one worry concretized into stone and became an oversized discomfiting pendulum in my brain.

But then, I read on. I must enjoy this poetry, weight or no weight, pendulum or no pendulum. Somehow, I pluck up the pendulum and sealed in a case. Subverted Poetry, the first in the collection was as shocking as it was true and as amusing as it was shocking. The beginning could not have been done any better, and when they have picked up their shredders and erasers and vile language, that is when we encounter the staccato jumps in our conceptualizing the poem’s faculties. The next four stanzas are reminiscent of this . . . mountain in their . . . elusiveness.

From a Poem to its Creator, the title poem of the collection, imaginative as it is, is the genius’s originality and inventiveness at its peak. The poem is now not just the hard matter on paper but a person, a being in life springing out to life from the white pages of the paper in defiant address to its creator. But then, the question arises: should it have been opportune to address its creator without its creator’s consent? If its creator denied it ink, could it have welded its personality?

From my experiences so far, I have come to realize that poetry just like any form of art must have aesthetics. But I refrain from using this word because sounding so academic it connotes a fleeting imperceptibility. Rather, I say it in a simpler expression: poetry is about beauty. Mma as the Igbo’s would say it. The rhyming, the sound, the imagery, the metrical organization, the form, the theme etc etc must gather into an unintentioned synergy. It is this unintentionality that places poets in different rungs in poetry’s Hall of Fame. In that Hall of Fame, where would Okenyodo be, you may wonder. Like our Nigerian banks he will make A+ surely but unlike our Nigerian banks not with the bogusness that has trailed any of them.

Our Okenyodo has merit. The audio-visual imagery and musicality in the lines “Let no squeal escape your throat / Muzzle the wheeze of your breath” (p.9) from the poem Poetry is one edifying sample. We can still feel this delicacy when he writes to Kenana, “Now, here it comes/ The much awaited voice!/ A smooth mentholic feel/ like rain on leaves”/ (p.15).

In Letter to a friend-to-be where the poet addresses the cycle of making friends and losing friends or more poetically friends fermenting into foes, the poet cuts at a deeper truth. And as he sends his message, he lightens up every page with funny turns and bends. Think of “You shall miss my messing up/ the room/ Which you would scold me for/ and clean up” (p. 13) from the above poem or “Tell this verse how grateful/ these words are to be its members” from the next poem Kenana.

Okenyodo’s Muse is one that has much respect for its characters; here, the words that form up the poems. So he grants each of his words ontological status; elevating them to the level of persons. They become for him Shakespearean characters each acting out its part in the universe of the poem. Therefore, each of the poems becomes a whole, self-sufficient and living.

In his novel, Waiting for an Angel, when Helon Habila makes Lomba to write, “I add word unto word/ I compare adjectives and coin exotic phrases/ But they all seem jaded, corny, unworthy/ Of saying all I want to say to you” (pp. 22-23), he hints at the inexpressibility of true love. Eventually, Lomba drops all exotic phrases and adjectives and says only Three Words: I LOVE YOU (p.23). Those were the best words with which he could talk to convey love.

In his love poem Azu Okenyodo just like Habila surrenders at the immensity and volatility of what love is. Or yet, when we enter the world of Chimamanda Ngozi Adichie and see her make the near (emotionally) rigid Kainene to admit, “Is love this misguided need to have you beside me most of the time? Is love this safety I feel in our silences? Is it this belonging?, this completeness?” , we understand then why the lover will write his beloved A Poem Each Day(p. 28) and swear to continue doing so As Long as Love Lasts (p.29) without leaving a day – no, a second unwritten.

Why have dictatorships and paranoid regimes pursued intellectuals even poets (not minding that almost all poetry looks boring even meaningless to none members of the cult) like cats pursue rats? Who was it again who said that what is needed for a revolution to succeed is not an unwilling majority but “an irate tireless minority ready to set bush fires in peoples minds?” The answer is simple. The pages of poetry can be imbued with cryptic messages. The cryptic messages are aimed at the intellectual class, the initiated who can tap at the nipples of knowledge to drink. Which revolution has worked (if you understand work to work in the now and after) without a baptism from the necessary intellectual community?

In Tears for a Pope, Okenyodo carries his baggage of “tears/ And blistered knees” “hoping that holy tears/ wash the white throne black” (p.19) and in the next poem Smoke, the Pope, the same message is felt when you read “Black Pope/ No Smoke” (p. 21) – that is if you are able to sieve it out from the alliterative lines. But then, when he describes a pope as “a symbol of unity/ a man who fears no change” (p.19), I ask myself, “have popes really not feared changes?”

Going through Okenyodo’s poetry, you are knocked into place. So I spend a whole day to exhaust his collection; trying each minute to understand this guy’s Muse. But all the while as I tried to do so, that weighted pendulum that I plucked out of my brain stubbornly returns: if this guy is so good as I see him, why have I not heard of him since now? Afterall, do our people not say that “afia oma na-ere onwe ya”? (A good commodity doesn’t need a sealer to trade itself).

Two days later, I am back from Kaduna and the question stays simmering in my head like a smoldering sauce pan. Then I go through the newspapers that I’ve missed on my trip, checking the Art pages first as usual. And in The Guardian of Monday, April 27th, 2009, I read the name that has assumed an all important significance for me within the past five days, “OKENYODO’S GUEST WRITER AT ANA ABUJA’S….”

I shout in exhilaration. Stunning all around me. I have finally met Odoh Diego Okenyodo. Say yeah or nay, I do not care.

Then, in that particular instant, an answer festering to his The Poem Postponed takes concrete form. (Okenyodo argued that the poem postponed will surely fond its true poet). I write:

Thank you Odoh Diego Okenyodo for this opportunity of meeting you

Tochukwu Akunyili holds a Master in Public Policy degree from the University of Erfurt. He is a freelance writer and public policy consultant. His publications have appeared in dozens of countries across the world. His works have been translated into 11 languages.

Richard Asamoah: Things you bring to the sea