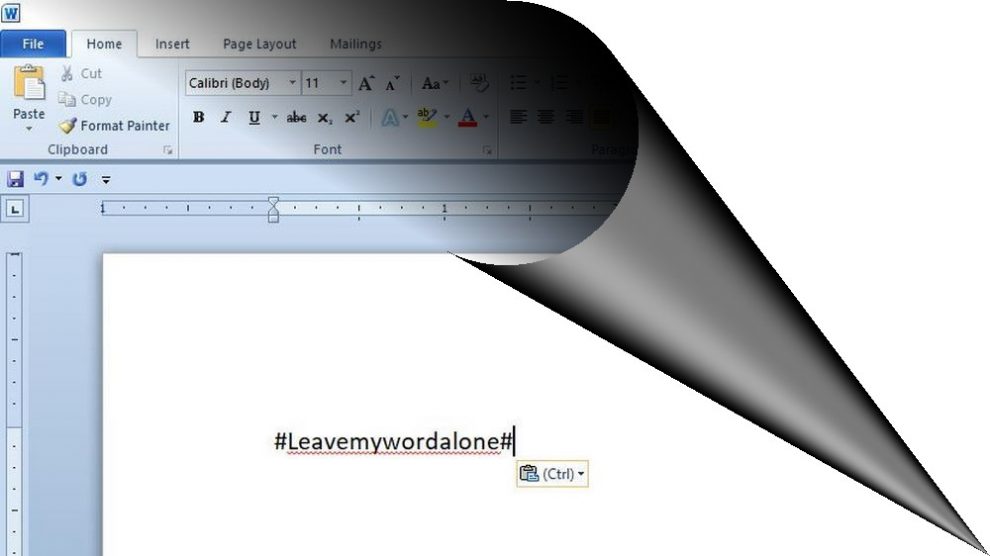 Words, like human beings, hate to be discriminated against. This is because they, like human beings also, have dignity. There is no form of discrimination in human history that does not have at the heart of it the use of words that encourage the decimation of other people. Racial discrimination. Ethnic discrimination. Class discrimination. Religious discrimination. Name it. All involved the use of words that attack the humanity of other people. A word therefore is a group of letters that comes together for the sole purpose of meaning making in a particular context. Hence, when you treat a word as if it were not a word, you engage in word discrimination. The wordlinity (word status) of a word is not determined by its presence in any dictionary; rather it is authenticated by its appropriate and meaningful use in a given context. You deword (discriminate, disregard, pluto) a word when you fail to recognize its existence as a meaningful unit.

Often, the words too, fight back. They start their fight from the phonemic level. Letters of our languages always fight for survival. They don’t want to get lost in the writing or the articulation process. Despite this, word-processing applications, rules of ellipsis, and word-making processes won’t allow some of our words to breathe in peace.  ‘Refer’ ends with an ‘r’ but the word quickly doubles the final ‘r’ both in the progressive and the past tense forms (referring and referred) in order to preserve the short vowel ‘e’ before the final ‘r’ of the main word. Likewise, the vowel ‘a’ in ‘stab’ wouldn’t watch being stabbed to death when written down or articulated, hence the doubling of the final ‘b’ in ‘stabbing’ and ‘stabbed.’ If you have the word ‘begin,’ the vowel ‘i’ before the final ‘n’ loathes the idea of dying in the orthographic and articulation processes, hence the doubling of ‘n’ when other inflections (the ones that begin with a vowel) join ‘begin’ and end up being ‘beginner’ or ‘beginning.’

British English always adds an ‘l’ (el) to a word that ends in a short vowel when the coda (ending) of such a word starts with a vowel. It does not matter whether the ending is stressed or unstressed. Let’s look at the word ‘revel.’ It originally ends in the consonant ‘l.’ But we double the ‘l’ anytime we add another ending to it and when that ending begins with a vowel. So let’s add another ending to ‘revel.’ We would have ‘revelling.’ Why do we do this? The short vowel ‘e’ in the main word ‘revel,’ the one immediately before the final ‘l’ would not want to die in that manner. So it retains itself through the doubling of the final ‘l’ so that we have ‘revelling,’ ‘reveller,’ and ‘revelled.’ It is the same with the word ‘travel.’ Other inflections would be ‘travelling,’ ‘traveller,’ and travelled.’ There are many other words in this category. When you use these words, your computer will certainly underline them because the Word application which you use for typing was designed in America. The implication is that American English uses just one ‘l’ (el) when writing these words. MS Word was computed to recognize American English. Just place your cursor on the underlined word, right click and click the ‘Ignore All’ option.

Microsoft Word’s attitude of underlining words that are foreign to American English Vocabulary is rather rude. It suggests that if it’s not American English, then your expression is wrong. It doesn’t matter whether ignore options are there or not. Word should be accommodating enough to accept words from many languages of the world since not only Americans use it. Instead of underlining a foreign word, Word should just display the origin of such a word briefly. Most times, even after you have clicked the ‘Ignore All’ option, you still see the same words underlined when you open the document again. That is sheer word discrimination!

There are even times when a writer doctors a word or uses a new word to his taste. You quickly find Word raising an alarm with its red lines sitting maliciously under such words. Word is a robot and this is a huge Irony. Word, being the most universally used word processing application, should be a co-creator with writers and not a limitation upon their imagination. Any word processing software should have the ginormous capacity to obey the heart and the hands that bring about coinages without having to put them in quotation marks.

Idowu Joshua Omidire studied English at the University of Lagos. His works have appeared in different literary anthologies, newspapers and online literary magazines. He is based in Lagos, Nigeria.

Daughters at the Kitchen Table: Poems by Abigail George

Just Right: A Review of Keletso Mopai’s ‘If You Keep Digging’

E.E. Sule: A Burden to Get it Right

The Epiphany: A Short Story by Oscar Mubila

Hissing Outside: Fiction by Felicia Taave