As I write this painful piece, his mangled body lies in the mortuary at the General hospital, Ikeja, Lagos. This is so sad, more so because his beloved mother’s corpse also lies in a mortuary, in some hospital somewhere in Imo State. She died about two weeks ago, at the ripe age of seventy two years. They were so fond of each other, to the extent that he calls her by her first name, Angelina. So, what is the Shattered Remains of this young, very enterprising man doing, lying listless, almost unrecognizable in a morgue where perhaps, there is no electricity to generate ice to cool his restless soul?

The news of his ghastly and untimely death hit me and I suppose, a large number of members of the Association of Nigerian Authors, ANA, with wild shock and chilling trepidation. The impulsive response by anyone who heard it was “it’s a lie!” Apparently, no one imagined, let alone believed that he, or anyone of us for that matter, could cease to exist so suddenly, shockingly, with so many noble dreams and aspirations scattered in the wind! 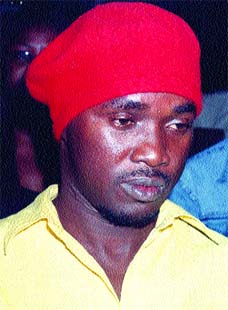 He had called me on Tuesday, but I was unable to take the call. I called him back later, and we were able to talk and agreed to meet at Cadbury Nigeria Plc., during the occasion of the presentation of the ANA/Cadbury Poetry Prize Award Ceremony. He and Lawrence Ani and Kalu Uduma were the major reasons why I found time to be at the event, eventhough I was terribly late; he came behind me. He had sometime last year, appointed me as his Literary Agent.

I had his Agency Agreement Contract form, sent down from America, in my bag. The cozy and cordial atmosphere at the venue of the Cadbury Awards was so palpable that it was difficult to discuss business. One saw so many new faces and cheerful, chubby old ones like Maxim’s, which one had not seen in a very long while. Naturally, there were so many warm handshakes and writerly bonhomie being exchanged. Who could have guessed he was indeed saying Goodbye Day?

We were among the last to leave the premises of Cadbury that Thursday. He said he was going to Surulere. We entered his car and he drove off, taking Oregun Road. There was a heavy traffic, and he turned sharply to the left, into the estate, where upon I asked where he was headed, because I had wanted to drop off at Oregun-Opebi link road, to proceed to Allen. He merely wondered why I did not tell him earlier, so he would have gone straight through Allen, instead of running into the Oregun traffic.

The very altruistic soul he had always been, he made a u-turn and drove me to Allen. We agreed to see soon, to discuss his literary career. How was I to know we were never going to see again in our mortal state! You can then imagine the cold shockwave that ran through my being when I received a phone call from a dear friend on Saturday, informing me of his death in a ghastly motor accident occasioned by a reckless, irresponsible and inconsiderate molue driver who had abandoned a broken down bus on the highway!

This is a terrible and needless loss of a multi-talented, intelligent, ebullient and gregarious artist who has made very valuable contributions to the cultural and economic development of this nation via his movies (his latest, Salt and Pepper, yet to be released) and literary outputs. Award-winning Script Writer, Director and Producer of numerous home movies including Piccadilly, Author of several essays, books of poetry, yet to be published prose fiction and plays including Nero’s Lodge, the most recent, which he was packaging for the Noma Awards, he indeed, like Malarme, lived a short but indelible life.

But to those who still grieve, groping, grappling with lack of understanding of the unsolved mysteries of Nature, I dare say – grieve no more! He went the way he knew he was going to go, like a shooting star. This is because this enigmatic poet/playwright told us through his poetry, the way he was going to leave this world. But perhaps, because he did not tell us when he would physically depart, we paid no heed to the prophesy of his poetics. He wrote thus, in the dedication page of his last poetry collection, The Insomniac Dragon:
——————————–
Come oh birds of the air
That neither sow nor reap
Feed on the fruit of my labour
And lend wings to my thoughts

To think he invested almost all he had in the production of his last home movie, Salt and Pepper, which is yet to be released into the movie market, lends credence to the above quotation. His last works in drama, Bread of Parapos and Nero’s Lodge, are still lying in the warehouse of his printers.

Yet again, in the poem Shattered Remains, our voyeuristic poet, seemingly predicting the nature of his departure, wrote:

And in the last poem of The Insomniac Dragon, Goodbye Day, he tells us how to know when he has said goodbye:

If you called out my sweet name
And I did not answer you
And you read this lovely poem
And I did not make a comment
And you threw a challenge
And I did not spring up
Know you then I have said bye
To you to everybody everything
In this wonder school of life
Those I know those I could not
Take good care of yourselves
Never forget the lesson you missed
One day it will be your turn
Bye.

Austyn Njoku studied French Language and Literature at the University of Port Harcourt. A poet and short story writer, Njoku's poems have been published in recent anthologies like Passport to the New World (edited by Sunny Ayewanu in collaboration with The Nigerian Commission for UNESCO) and the International Library of Poetry anthologies. More of his poems have been published in Nigerian national newspapers and magazines and put to Baroque music in THE SOUND OF POETRY. His first collection, I've Been A Crew, got an Honourable Mention in the Cadbury Association of Nigeria Authors (ANA) Poetry Competition. Scents of Dawn is his second. The former Treasurer of ANA, Lagos chapter, is sadly now deceased.

Naming the Unnameable: A Memorial For Ebereonwu

The Cross-Continental Black Nation: A Poem by Rukayat Ololade Aliyu