Language plays a vital role in artistic composition. Oribhabor’s collection of poems is novel in diction, craft and aesthetic. Language takes centre stage not only as a means of communication but of construction of artistic artifacts. The collection consists of over fifty poems with divergent thematic thrusts. The poems were not classed into thematic categories but left for the reader to find semantics from the corpus. The language used in the composition is the Nigerian Pidgin which the poet prefers to refer to as Naija Langwej. Although Oribhabor is not the first Nigerian poet to use Pidgin in poetic composition, the poet sets out to use a stone to kill two birds: to show how Pidgin could be used as an independent linguistic mode and to validate the notion that apart from Standard British English, Pidgin could be used in literary composition. 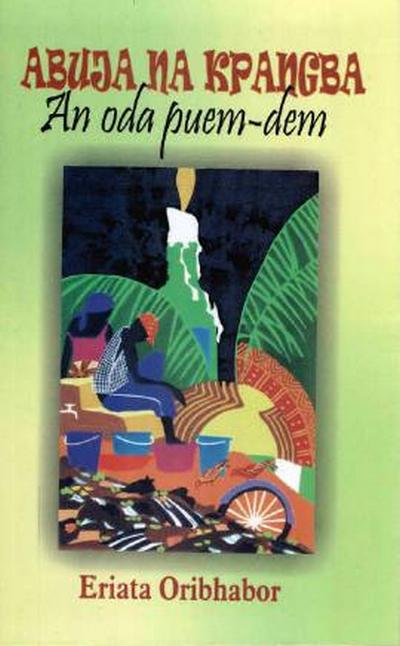 The first poem in the collection, “Abuja Na Hevun, na Kpangba,” eulogizes the splendor and tranquility of the Federal Capital Territory. “Abuja koret/na ples we get/ bam bam haus/beta beta rod/we kari plan” (1). The poet persona observes that social amenities are functional in Abuja: “NEPA de wok” and there is abundance of money, “kudi de fo graund” (2). It is obvious that the poet lives in Abuja, “Abuja na de ples/na de veri ples/I de kamkpe no be lai” (3). Across ten stanzas, the poet captures the divergent faces of Abuja and concludes that “Abuja na kpangba” (4). The poet juxtaposes the portrait of Abuja with that of Lagos, in “Ol Join,” and declares that the latter is dirty and unkempt. The poem is a photographic shot of major Nigerian cities and the nature of their plights. The poet observes that Lagos is fine architecturally, but “yeye de smel/yamayama de du im oun.” (20) The poet is saying that Lagos is dirty and filthy albeit the government is trying to remedy the situation.

The poet was kind enough to provide interpretation of some words and phrases which could pose a threat to a non-Nigerian reader or even a Nigerian who is not conversant with the Pidgin system. In the poem “Na fo haus yu swim?”  the poet reminisces upon the past and how he and his agemates play freely in the wild and even “swim for dambadamba” (11). In the footnote, the poet explains “dambadamba” as “stagnant pool of rain water collected in dugout sand pits.” As a child, he played in the sand, and even “do as wi laik,” and “…baf autsaid.” But in the contemporary world, children’s liberty is curtailed and they are cordoned off by fenced houses in towns and cities; even if they are not cordoned off, they are not allowed to play freely: “dambadamba de dash okrikpoto / ojuju de kach for en / dem most swim fo haus.” (12). Okrikpoto is explained in the footnote as “ringworm”, and “ojuju” as “masquerade.”  We see a similar theme in the poem “Wich neshon yu bi?.” The poet reminisces upon the days he was growing up with his disciplinarian father. The father beats them when they erred, corrects them verbally when they go astray and taught them many things. Since most of his children are boys, “I gada os like gels” (17) and handles them properly.

The collection is an amalgam of poems on diverse themes. Thus, in the poem “Laif na jangalova,” the poet reflects on the essence of human life on earth and concludes that life is like a swing. It is unstable, and could be sweet or bitter sometimes: “laif na shuga / na bita lif / ol join.” (18) This swinging pattern of life is explored in the poem “Gi mi yestade.” The poet reflects on life in the 70s, 80s and 90s before things begin to fall apart. The poet noticed that, “pepe no de laik befo” (25).  Pepe here refers to money. In those days after graduation, “dem giv mi wok / dem folo am wit fo leg”: after graduation, you would be given a job (“wok”) and a car (“fo leg”). But today, the reverse is the case: “bifo bifo na laif / laif de du revais.” In “Tumoro go kom,” on the other hand, the poet admonishes that no man knows the shape of tomorrow so we should use what we have today to build our tomorrow: “gada tode / si tumoro / I don land fo yo hand.” (34)

The poem “Wich Landa Broda,” challenges the claim that Europeans discovered Africa or other historical sites in Africa. The Lander Brothers claimed that they discovered the mouth of River Niger. The poet questions such claims by asserting that Niger has been with Nigerians for ages before the arrival of the Lander Brothers, so how could they lay claim to the discovery of what was not lost? It was Nigerians who took them to the mouth of the River. We see a different preoccupation in the poem, “Homa de hama.” The poem captures social stratification. The poet persona laments that he and his agemates were friends (“we sabi bifo bifo”) before some of them became wealthy (“wen tins no blend.”) (30). However, as some of them succeeded in their enterprises and bought Hummer Jeeps, “brij kom enta mata… levul don chenj langwej.” Wealth, therefore, ultimately leads to social stratification. There is a note of consolation in the poem “Evribodi get im tie.” Every man has his own cross to carry and his own time of glory.  The poet encourages everyone to focus on his own business and eschew laziness: “sidon luk na dog nem” (32) so, “laif na ogbonge tie / evribodi get im tie / tie yo oun.”

The quest for materialism has broken so many homes in contemporary Nigeria. Nigerians flock to the West in search of greener pastures, and this often breaks up the home and affects adversely the sanctity of the family. The poem narrates the story of a family whose members have all travelled abroad leaving the father alone in Nigeria. The family is in disarray: “Mama don travul / papa don trai taya / I stil de” (35). The husband and wife fall apart and the marriage crumbled: “broda don los / anti no mari / papa and mama don tie pepa.”

Nigerians have been deprived of so many basic social amenities which include electricity. In the poem, “Mai paspot,” electricity is seen as the passport one needs to cross over from the class of the deprived to that of the haves. However, the poet is of the opinion that, “NEPA ful fo op / I de go op an daun / bot im leg no toch daun” (51). In other words, the upper class have light while the others don’t have. The poet observes that Nigerians have been deceived for far too long about “the megawaz.” However, since there is no hope of stable power supply from the government, it becomes imperative for the poet to procure his own power generating system so as to climb up the social ladder. Electricity thus has become a source of prestige. The last poem in the collection, “Naija Joni,” captures the plight of Nigerian road users. The roads are broken and are death-traps. Therefore, since the roads are in bad shape, the journey is lengthened. The poet says, “my bele don si nwen,” (56). This expresses the tumult in the poet’s stomach as the vehicle plunges in and out of potholes. He feels dizzy and dazed: “mai hed don de kolo”. Above all, we see a picture of the car struggling to maneuver through the broken road in this line: “wi de drag wit rod.” At last, the poet reaches his destination.

The poet relies on local imagery, and idiophonic tropes to pass across his message. In “Homa de hama,” the use of repetition and rhyme makes the poem musical. In the first stanza, we have

We see the repetition of “oun” which is at the end of each line. In the second stanza, “blend,” and “bifo” are used at the end of the lines, and in the third stanza we have “mata” rhyming to create musicality.

The poet makes use of repetition, assonance and pun a lot. There is a play on the word “tie” in the following lines: “laif na ogbonge tie / evribodi get im tie / tie yo oun.” (32). The first and second “tie” are nouns while the last one is a verb. The poet plays with the word, “moimoi” in the poem, “Laif no bi panyan”:  “Moimoi na fo chop / laif no bi moimoi.” (33)

In the poem, “Wetin dem no du,” the poet makes use of rhyming couplets. Words like “sabi, du, trai,” rhyme in the first, second and third stanzas. Likewise the use of rhyme is employed in the poem, “If I get as I bi.” The poet plays with “hun” in the lines, “If mata kom hun hun hun / iye go opun fo graund/hun hun hun go hun” (38).

In “Ikoro plenti,” the poet makes use of metaphor in the lines: “only fo nait / dia hat na ston / dem bon AIDS” (8); while we see personification in “de trowe tumorrow.” In “Mek somtin no du yu,” the poet makes use of different tropes to drive home his message. In the lines, “some taim mai hed / go de ron raund like se / dem giv am dog injeshon,” the poet uses two distinct figures: synecdoche and simile; while we see repetition in “I go go ye, go die / go yonda, go dis we.” However, the poet uses assonance in the line, “some taim mai maind…,” while he uses simile in “hevun wan fall laik se no bi pat of mi.” In the poem “A get sista,” the poet uses alliteration in the line, “No bi boi bi di tin” (12).

The poet, Eriata Oribhabor has constructed poems using the Naija Langwej which is novel in the history of Nigerian poetry. In his works, Nigerian Pidgin ceases from being the language of the subaltern class, or of embellishment to create local flavor, but a true language of art. The language which has been debased by many Nigerian writers has been given a place of prominence in Oribhabor. What he has done should be appreciated by all and sundry especially those promoting the Nigerian Pidgin. Poets and writers should be bold enough to make use of Naija Langwej in their works so as to publicize our own brand of English.

There are, however, a couple of drawbacks. In the poet’s quest to use the so-called Naija Langwej, he churns out some poems that are shallow, devoid of elegance, sublimity and ambiguity.  Language is not the ultimate in poetic composition but elegance of diction, depth of thought and freshness of language which jolt the reader to a new reality. In this light, poems like “Mai Buk,” “Life no bi panyan,” “Konzotant vesos profeso,” “Beta pas gud,” “Wi de wok,” “Gi mi kpekere,” “Somtin de,” are not elegant and sublime. They resemble the lyrics of a rap song. It is pertinent for the poet to harmonize form and content. Giving impetus to content alone will breed poems that are substandard and intellectually shallow.

Akwu, Sunday Victor, holds a degree in English & Literary Studies from Kogi State University, Anyigba. He is a poet and critic with a Marxist touch.

The Eagle: Poems by Abayomi Ogunniyi