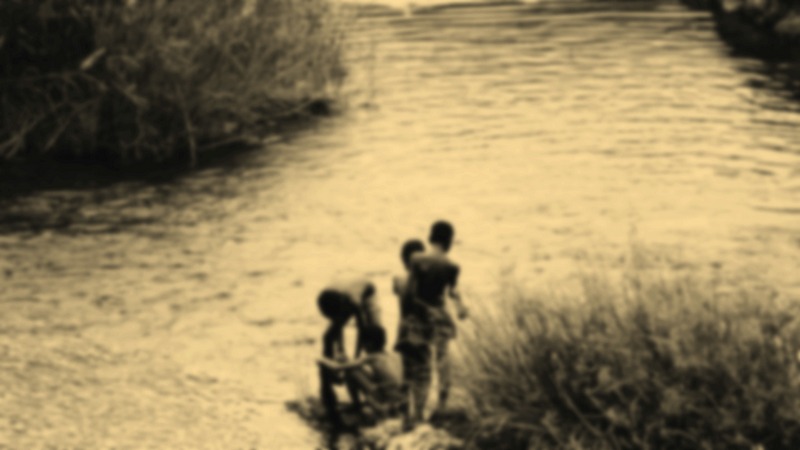 There was no day we went to the stream without Profesa Mudogo stretching his eyes to the water pipe on the other side of the stream, laughing from the bottom of his stomach, saying:

“Africans are Africans; Europeans are Europeans.”

The pipe was easy to see. It stuck out badly from the lips of the rocks, moist even, but no longer reaching the running water because someone had broken its mouth and taken it away to use in God knew what. In those days of bathing at the stream we would gather our clothes on this side of the bank, under the big orembe tree, and listen to Profesa talk about the pipe before we jumped into the clear water, washed our stomachs, and walked home to return the following midday when the eye of the sun was angry.

Yes, it was the child-of-a coup that had kicked the buttocks of Profesa out of the university where he taught and made him our herdsman (he was still in hiding from his government hunters in Nairobi and Kisuma, now that the coup plotter had been caught and hanged).

It was in those days of bathing in the stream that I began hearing of distant places called Amerka and Rasia falling from the lips of Profesa, and the whole Odiya said how Mudogo’s head had properly gone to school with white men abroad. I must tell you of the long hair which Mudogo combed so that it stood like the head of the long-tailed oluru bird. And also the long but clean nails which he washed each day and repeated every morning that the President was running the country like a house for chicken…

Big wings were beating on the orembe branch above us. We saw a crane bird perched there. Profesa said the bird was crying because she had lost something. Her cry drowned out the splashing noise of water running over rocks. Onjiri crickets chirping on the trunks stopped their song. A smaller bird beat her wings and away.

“Leave the crane bird alone,” Profesa told me. “See that pipe instead. You see it?”

I agreed, “Eeee,” looking across the water.

“It is crying for water.”

“Eeee, it cannot reach the running water because someone broke its mouth.”

“The pipe is a drinker of water?”

“A-a – that pipe is begging for water which he can carry in his stomach and take to the estate of the Provincial Commissioner, the way he used to carry when the white man lived here in Odiya, in that sugarcane estate.”

He pointed to the estate near the distant hill.

Profesa had never tired of whispering to us about the fat herd of dairy cattle Mr. Dawson had kept near the hill before independence. And many fish ponds.

I do not know why the crane bird wept aloud at that moment. When we looked up she was beating her wings. She was flying away…

We were walking to the village shop on my second year of school. We crossed the stream with her clean rocks, tall trunks, onjinyo wagtail birds bathing, and crickets still singing. Up the slope, on the lips of the soil cracked by angry heat of the sun, we came to the v-shaped gulley where rough water bared a length of the pipe baked brick-red with rust, running over what Profesa said was five miles of walking to the foot of Odiya Hill where Mr. Dawson had lived, yet then owned by our tribesman, the Provincial Commissioner. A section of the pipe had been dug out of the ground and cut away.

I remember how Profesa took me to the Provincial Commissioner’s estate on our way back, and he told me how the broken pipe at the stream had taken water to the whole estate before the white man left. Yet now the tanks were thirsty and cracked. The rusty pipe could not send them water from the stream. There was no dairy cow where there had been a large herd before. The fish pond of Mr. Dawson was full of slimy green algae and frogs with eyes like two stones. All the buildings were wrestling with rust, decaying, and old. Two dirty backs of workers were visible on the lips of the Provincial Commissioner’s sugarcane crop, swallowed by the weeds they were sweating to uproot before the rains returned.

A bush of ripe guavas stood nearby. Oluru birds were sucking. Satisfied, some birds jumped onto the backs of their wives.

“Hahahahahahaha…” – Profesa burst out laughing, his voice echoing in the guava bush.

I asked, “You laugh at the birds?”

“Human beings do not laugh at birds, omera brother.”

We were walking home.

I pestered, “What did you laugh at?”

Profesa Mudogo told me, “At the distance from here to the stream…”

For Both Our Sakes: A Short Story by Nnamdi Oguike

A Story between Two Augusts: Poems by Ebuka Prince Okoroafor