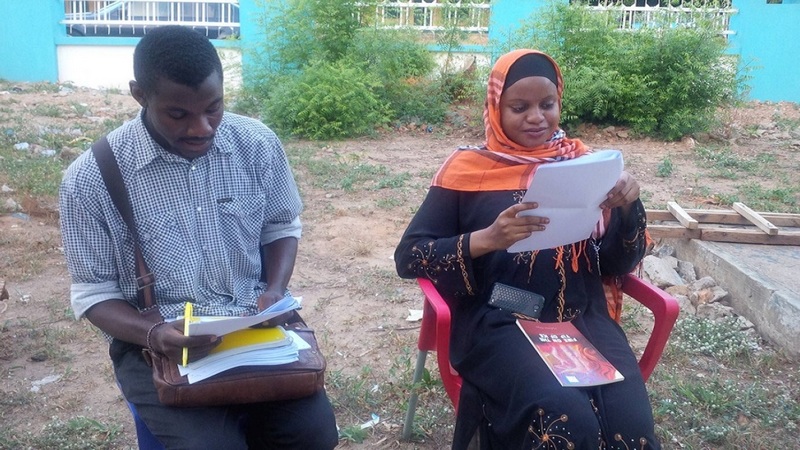 On the 15th of May, 2015, David Ishaya Osu, a poet, and a prose writer, Halima Aliyu, read as guest authors at the burgeoning Hilltop Arts Centre’s Peer Review Session. Osu who is widely published online, read from his (unpublished) work in progress. He read poems such as 76, 13, Of Sunset, 1, Advice, Tanka and Poetry Class. The poems were warmly received by the audience except for some concerns raised over the strangeness of the title of some of the poems, which some persons opined contradict the thematic preoccupation of the poems. Osu, while explaining his style of writing, posited that he writes for himself but expects others to encounter his work as well. Someone observed that if he writes for himself then he has no business reading the works to the public, since he may not be too concerned with whether they understand him or not. Another person commenting on the language of the poems described them as prosaic and lacking in aesthetic depth, but Halima Aliyu interjected that every piece of literature has its language and that it is the duty of the writer to listen to the language of his work and obey it. She equally submitted that Osu’s language was fine and that she particularly liked the poem, ‘Advice.’

Halima Aliyu read from her debut adult work, a collection of short stories, Fire on the Tip of Ice, which was only recently released by Kraft books, Ibadan. She read the story, ‘Take A Step’ and everyone accepted that the story was an award winner any day. The first speaker extolled Aliyu’s sterling style of narration, especially her employment of a child narrator called Junior, who tells of his resolve not to walk and his mother’s growing concern that he may become a cripple. Hearing that he may become a cripple prompted Junior to change his mind and take the first walking steps of his life, to the joy of his mother. Another commentator praised Aliyu’s wit and ingenuity for the successful manipulation of what would appear a simple story turned into a classical narration that makes one want to laugh and cry at the same time. Another person described the story as genuinely fresh and enthralling, but Fodio Ahmed only loved and appreciated the voice of the guest author which he described as stealing his heart, to which the audience laughed heartily. By and large, it was a wonderful evening of laughter, rebukes, handshakes and goodbyes.

The Hilltop Arts Centre’s Peer Review guest author session reading was conceived sometime in 2014 by the young writers and mentors of the Hilltop Arts Centre, Minna, to encourage young writers, especially unpublished ones. The writers who conceived and nurtured the idea include Saddiq M. Dzukogi, Maryam Bobi, Halima Aliyu and yours truly. The group sought an avenue where quality interaction and critical attention would be given to an individual’s work for the purposes of making it better for public appreciation. The group also realised that many young writers needed quality opinions that would help improve their writings. It was also a place where young writers could engage in productive discourse that could enrich their sense of the literary and aesthetic.

The first edition featured the now published poet Fodio Ahmed. Since that outing, about ten editions of the programme have been held at the Hilltop Arts centre, at Hilltop Model School. Other writers who have been featured in the programme include Chibuzor Okoroafor, BM Nagidi, Halima Aliyu, Maryam Bobi, Saddiq M. Dzukogi, TJ Benson, David Ishaya Osu, Deborah Oluniran and Hauwa Nuhu Shafi. The programme holds every Friday by 4pm, although sometimes due to unforeseen challenges, the group goes on recess and resumes when the situation is more conducive for such interactions.

Writers in attendance include Nurdin Busari, Fodio Ahmed, Maryam Manko, Godwin, and yours truly who also coordinated the reading session.

The Lament of Rage: A Review of Servio Gbadamosi’s ‘A Tributary in Servitude’