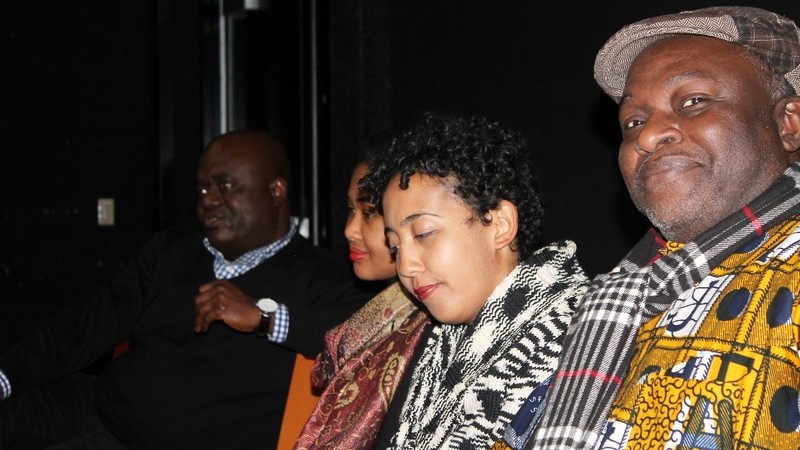 The flyer I read on Twitter promised the event slated for Feb. 15, 2017 would feature some of the most recognisable names in contemporary African writing, all under a roof at the same time: EC Osondu, author of This House is not for Sale; Chinelo Okparanta, author of Under the Udala Trees; Okey Ndibe of Foreign Gods, Inc.: Caine Prize winner Namwali Serpell; and the venerable Uwem Akpan, author of Say You’re One of Them. Add to that the opportunity it was offering to finally meet Chika Unigwe, festival director, long time web acquaintance and author of On Black Sisters Street! The conspiracy of sorts between the weather, traffic and family could not keep me from escaping New Jersey to attend the African Writers Festival billed for the famed Brown University in Providence, Rhode Island, even if it meant I would catch only a couple of hours of the activities (and that’s precisely what happened!).

The morning session, a panel discussion, negotiated the subject of “The Writer as a Public Intellectual“, while the afternoon session had the featured writers reading from their works. Serpell read Triptych: Texas Pool Party. Osondu read a scifi short from a new collection he’s working on. Ndibe read from his newly published memoir, Never Look an American in the Eye; Okparanta read a delicious remix of a well-known Nigerian folk tale, and Akpan read from his Commonwealth Prize winning book, Say You’re One of Them.

I asked Chika Unigwe a few questions (see below for pics too).

In all, it was a memorable day. To new friends!

Sola Osofisan: Its finally over. You can breathe easy… Are you happy with the way it turned out? Enough to want to do it again soon, bigger and better?

Chika Unigwe: I am! For a one day festival, the weekday format suited us. Sadly, I heard from colleagues and students who couldn’t make it because of classes or who could only make bits of it at time. I am very happy with it. Lots of good reviews from the people who were there. Bigger would depend on funding. A one week festival with more writers would be superb!

Sola Osofisan: What thinking brought the African Writers Festival into existence? And why do you think it is needed at this time?

Chika Unigwe: I wanted us to celebrate Black History Month at the university by celebrating African writing. In the past fifteen years, African writing has seen a huge explosion (in the west) and I wanted to bring some of the writers to our university, to dialogue with students and the wider Providence community

Sola Osofisan: It was nice to see the gathering of people getting excited about African books and literature. The mixed audience could relate to the stories and characters. What do you think (or hope) they took away from the event?

Chika Unigwe: That at the end of the day, we are all humans. And a well told story, regardless of setting, affects us all the same way.

Sola Osofisan: I failed to arrive on time for the panel discussion. Was the conversation as exciting as what I witnessed at the reading and the QA session?

Chika Unigwe: The conversation was super! The panelists provoked a conversation on a wide range of topics: the image of Africa (in the West); the state of the union in America; what it means to be a public intellectual (and /or a writer) in America and on the continent; the changing role of the writer in America (thanks to the current political and racial climate).

Sola Osofisan: As a writer and teacher, are you happy with the general attitude towards African Literature these days? Or you think there is more to be done?

Chika Unigwe: I think there is always room for improvement. I think those of us with the opportunity to shape the narrative around African writing should certainly step up to it. I designed a course on African Writing published in the past 15 years because I wanted the students to have an idea about African literature beyond recommended texts in high school.

Sola Osofisan is a writer, screenwriter, filmmaker, and founder/editor-in-chief of AfricanWriter.com. His movies include 'Unbreakable' (2018, Screenwriter, Co-Producer), 'Over Her Dead Body' (2020, Screenwriter, Producer, Director). His award-winning radio play, OLD LETTERS, was produced and broadcast by the BBC. A three-time winner of the Association of Nigerian Authors national awards (prose and poetry), he is the author of DarkVisions (Malthouse), Darksongs, The Living & the Dead (Heinemann) and Blood Will Call.

Lacliques’ Drinks and Dance: A Short Story by P.M. Jayawardana

Everything Good Will Come: an excerpt

I Write Because I Care For People – Uzodinma Iweala