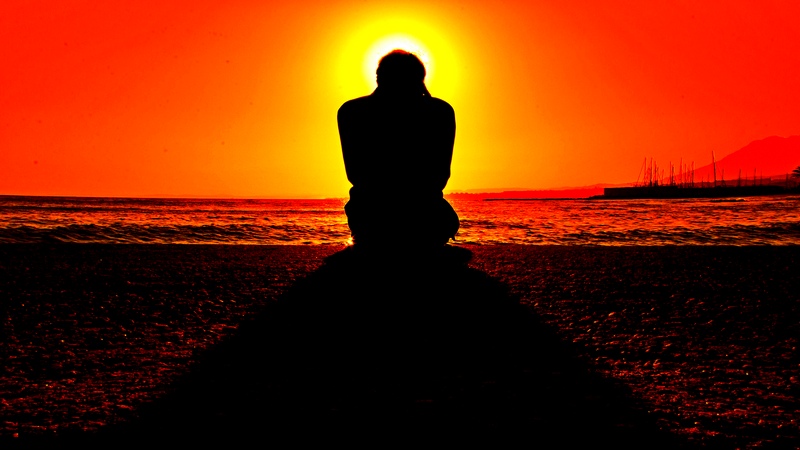 The sun was setting in Stonehenge and I was not about to leave the experience yet. Though Stonehenge was a place completely distant from where I watched it, I saw all of it, entranced by the landscape: orange-red light dissolving behind a henge of tall stones.

The world was mourning the death of Elechi Amadi at that time and appraisals of his most famous work, Sunset in Biafra, began to appear all over the internet, and revealed a curiosity: what did sunset look like in foreign, faraway places? I had hit the internet – with the laptop that came as benefit for working as a proxy in a bet shop – and was rewarded with an avalanche of beautiful twilight images and GIFs. Stonehenge stood apart.

It was only past six when I found myself looking through the shop’s screen door, away from sunset in Stonehenge, to the sun setting right above me, in Lagos. It was ironic because at one time, I was awed by the echoing vermilion of a falling sun on screen; another minute, I struggled with the reality of the same sight and the grief it formed somewhere inside me: grief that had come to herald any suggestion of home.

In Stonehenge, I saw a possibility of fulfillment, a way to create a city by my imagination and journey across to live a creation; a way to escape. Sunset in Lagos, however, was only a reminder that it was only a few hours before work closed and everyone returned home. And home was a masochist’s delight; a puzzle game with fewer tiles than blank squares. Home was something I could not fix. It was where I had not yet found, or simply would not be.

Home used to be what I ran to when Doyin, the bigger boy, bloodied my nose with a punch. It used to be what made the school’s closing bell mean anything at all. But it had only been these things as long as I was a tweenager.

Now home is too multi-faced to leave me with an impression after considering tagging it to an idea, so my mind has developed the system of shutting down whenever any of such considerations may feel welcome. Yes, I am afraid. I am very afraid I may finally find home, but in a place it just should not be at. I think I need a home – who does not? – but I am not sure I can handle wanting it just yet.

I had found myself working unwaged in that NairaBet shop from 9 a.m. until 9 p.m. months after arriving…in Lagos. But that was never a part of any plan nor was it an occurrence worthy of being thought a possibility prior to leaving Onitsha.

Life staying with my aunt was not what I had left servitude as an apprentice in Onitsha for. It was no life for a teenage boy with an old king’s dream. I knew this because I had had a really physical taste of that life once, and as far as toxic events go, once was more than enough to not think twice before turning down a second opportunity. So I had arranged to stay with my aunt only for a while – just long enough for my cousin’s husband, Brother Whyte, to keep his word of bringing me over to stay with him instead.

Brother Whyte had assured me that it was perfectly fine that I decided to stay with him when I returned to Lagos. But there was a condition: I had to stay a while with my aunt, his mother-in-law, my cousin’s mother, my buried mother’s sister. He said a while, so it would not have looked like he had orchestrated the move. Just a while. I did not have to agree, but I did. I learned something quickly in the following weeks, though: even a good man’s assurance is untenable to the womanly wiles of the wife he is married to.

When his wife, who was my cousin, learnt of her husband’s decision, she blew her top, furious that I had approached him before family, the latter which she surprisingly claimed to be a part of. Family, to me, had always been a bond established by selfless sacrifices and a veiled knowing before by blood, so I left that revelation somewhere behind me, seeing how terrible a ricochet it would be to explore anything of it.

By that single knowledge she had revised a plan, and in consequence, brought any hope of execution to heel. It was the beginning of the grief and grievances of many sunsets to come.

I cannot even vaguely tell what talks were exchanged between my cousin and her husband in the privacy of their home, but I knew it like the back of my palm that they had discussed it resentfully, and Brother Whyte, my good man, would not lose his wife to the unsound ambition of a teenager he once was willing to help. I knew it because my cousin returned with both a threat and a boast, neither of which was any use as I had expected nothing less.

So, ‘just a while’ transitioned into months. Five months. November 2015 to April 2016 was only data. It was what these months staying with my aunt held for me that beat a promising plan into a mere story. With mine, it took months to ruin a plan, but as I learned afterwards, life does not follow any code of behaviour; it is erratic. Sometimes, there are no months involved; it takes only minutes to change everything for worse, or better.

Everyone would have been surprised, and they certainly were, watching me lift two 30-litre kegs of water, one on each hand, up a three-floor community building every morning. But their bewilderment may not have been intense if I did not have to go close to six trips with these kegs, wash plates and then get food and any other stuff for my aunt, her two sons, then her two other daughters, too, while they were either having an early (or late) morning chat or just awakening from an undisturbed night’s sleep. Every morning.

Things got worse when my aunt imposed a prohibition from seeking a job; a prohibition that, without any reason, supervised me alone. So, I settled with ‘working’ in the place of one of my aunt’s son; a NairaBet shop. No allowances. No pay. Just one hundred naira I beckoned from among my cousins and acquired on lucky days. Going to the shop was just something to keep me away from my aunt. Until sunset, when there was no longer keeping away from anything; when there was a dawning of death inside me, dusk from within, because while a lot of people were returning home, I was returning to my affliction. Even now, I wonder if all those people returning from work were really returning home or returning to a drunken husband, a distressing wife or delinquent kids.

The vertex of my affliction came when, one night, my aunt shared dinner and left a plate unfilled. She denied me food. It was something I imagined only the devil incarnate capable of, because if anyone can deny someone else food, then they may as well offer poison if they definitely have to serve. My aunt did not and in fact could not have said it by herself. But I got the point. She wanted me gone.

She made a habit of picking something to nag about every day. Despite my quiet perseverance, she remained rigid, her point always crystal clear. I was an enemy and nothing an enemy did was enough to mean anything at all. What she had not known, though, was the anomaly that was me. I had seen enough negatives to be bothered about any of her misdeeds. However, her ignorance never lasted, though a part of me wished it did; the other part was just present.

Interestingly, her knowledge of my indifference to her aggression came with a price: my phone. She robbed me of cherished contacts, and plots that had been building into stories in mobile QuickOffice. She had assumed that I being in possession of my phone was what made all her efforts fruitless, but that was her mistake, because she had seen that strength in a thing without life and not in me, where it lay. So a life without a job continued and a life without a phone began, but my life of indifference to her aggression never ended.

Until, one day, when she asked me to leave. To where? She did not care. It was the only change I was really scared about. Stepping out into a world where I may no longer dread sunset, but where, in its place, I knew no one. But I stepped out; with fear, guts, and everything.

Now, just like most people who we may think have a flowery life, I am still moving out, out of many things; out of friendships, out of grief, and out of trust. And as for ‘just a while’, I just cannot bring myself to trust that word again. Nonsense.

Iwundu Wisdom is a Nigerian writer whose works have appeared in The Kalahari Review, TeenInk and Brittle Paper. He lives in Lagos where he teaches small private colleges.

Why Africa Did Not Die In Biafra: An Essay by Nnamdi Uzuegbu

Naming a Child in Exile: Poems by Kabu Okai-Davies

Why I Fought In the Church: Fiction by Esomnofu Ebelenna

Esomnofu Ebelenna
We use cookies to ensure that we give you the best experience on our website. If you continue to use this site we will assume that you are okay with it.Ok