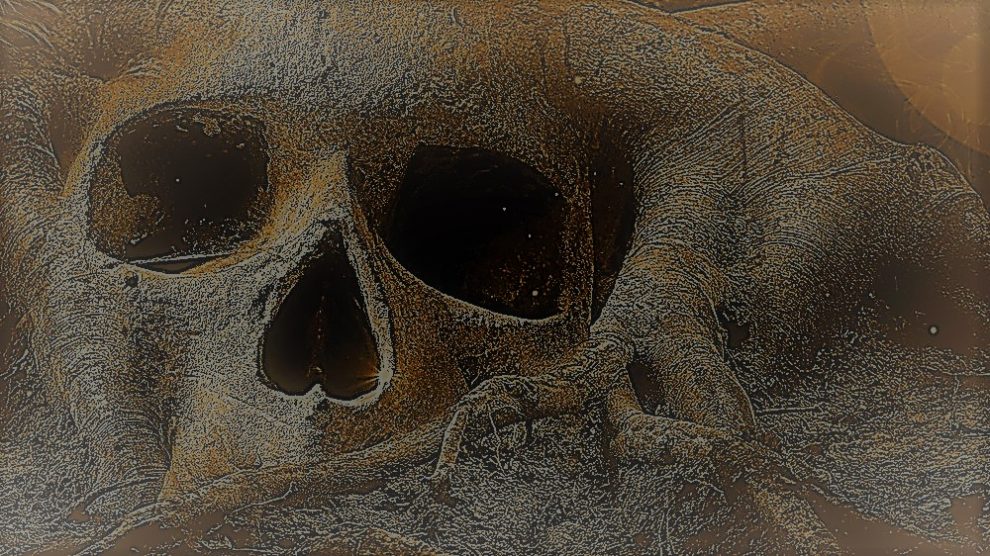 I do not believe my ears. I wipe my forehead using the free end of my flowing agbada. The blue ankara material returns to my view soaked. My other hand has been occupied gripping my friend, Odim, who is just as mortified – not because I’m gripping his knee, but at the apocalypse of information reaching us from this dwarfish dibia with a bushy jawline. The tripartite incisions at the corners of his fleshy lips resemble feline whiskers glued to the face, his tribal marks as cold as what he just said to us. While fiddling with his penknife key holder, Odim is busy staring at his ankle, the body part he has just been told he will part with.

“B-but, you never told us that seven years ago!”

“Son,” dibia says. If that appellation doesn’t offend me enough, his air of condescension makes me want to slap the word straight off his lips. Or, better still, shove it back down the throat where it came from, with a generous punch.

The lid of a black cauldron, clinkering as it bounces under the pressure of steam, is the only sound in the discomfiting silence; the rancid odour of the boiling potion assaults my nose relentlessly from the corner of the room. I watch an absentminded Odim stroking a mark on his bent head. It reminds me of the three hundred and ninety-nine tiny incisions running from forehead backwards down to the base of my spine and another eighty-one from navel round my frame and back to origin. It had been part of the ritual this man in front of me made for me, Odim, and a few other people we met on that day. The chief raw material for the process had been a hunchback albino and each person, in turn, without revealing to another, was to choose a body part. The body part chosen was ground into paste and mixed with a potion, which was smeared on each of the incisions. The pong, the pain! Then the money began pouring in from strange sources and in alarming amounts less than a month after.

“My son,” dibia says again, clearing his throat and my reverie, “untold mysteries aren’t unearthed in a day, and the flowers of a covenant take eons to blossom.” A whiff of kolanut trails his raspy words. The humbug he is uttering pales beside the horrifying news I am yet to recover from: That the seventh-year side effect of what we did is that the equivalent body part each person chose would start to waste away till it falls off. If it offers any comfort though, he had added, only the shriveling body part would die of; the rest of the body would be fine.

“And were secrets common knowledge, there’d be no simpletons on earth.”

Odim and I trade glances over what we hope this midget did not just call us. But who is to blame him though, when we had walked into his house on our own accord? Yes, under much different, compelling circumstances, seven years ago.

I grew up in a male-populated yet female-dominated household. You know, normally, what a man lacks in financial authority, he can make up for, at least, with brawn. Yes, yes, I know respect isn’t earned by muscle but however distant a cousin intimidation is to true authority, a bloodline exists still. My father, unfortunately, is an antithesis to this ideal. Frail, miniature and with a thin voice, it’s like he skipped adolescence altogether. Mother, on the other hand, is fully grown on all fronts, her every feature daunting even when she hasn’t the intent. She is a decent woman, humble and tolerant. I’ve only learnt that though adversity can groom such virtues, a little too much of it can invert them. When a woman no longer minds the entire neighbourhood stepping in to intervene in late-night, early-morning, midday, even spur-of-the-moment bickering; or you hear her querying her husband over how his responsible mates provide for their families, a quick bias would be to label her a shrew. But snap labels are hardly spot-on. Or aren’t there limits to what a woman can endure? While my African mother was brought up to believe true love should not be predicated upon money, to declare that a lack of it is no diluent of love is pure drivel. Drivel that, ironically, is found mostly on the lips of the well-to-do.

So, whenever a fistful of father’s faded buba is detained in mother’s grip – unintended spittle projectiles escorting intended expletives from one’s mouth to the other’s face – and we were near-certain a dose of slap would be the backlash but which never happens, the typical wife-beaters in the neighborhood would gossip over how helpless he was. Not that he himself doesn’t lament how his utmost just doesn’t seem good enough for mother. The man is simply not in charge; too broke, too brawn-less, too boyish to be. For families like mine, I’ve also observed, if super-indigence were cake, fecundity would be its icing. Father is so fertile he can impregnate with his pants on. With fourteen of us, and mother’s swollen belly holding a fifteenth, anytime I woke up in the dead of the night for a pee, the sight of siblings strewn all over our one-room apartment resembled the scene of a massacre.

Frustrated one harmattan night after having had my saliva for breakfast, a tiny slice of roast yam made up to satiety by two litres of stream water for lunch, and more saliva for dinner, I snapped at mother when she woke me up to release my blanket for one of my siblings who was trembling with cold. No hard feelings for my shivering sibling, but why shouldn’t I be mad when a friend was offering me a plate of akpu and afang with a surfeit of bush meat of varying sizes? Was there no better time to rouse me other than when the first morsel was approaching my lips? Worse, she’s fond of saying eating in dreams is a spiritual ill omen. What was spirit when my eyes see double, and my entrails make inharmonious sounds from extreme gastrointestinal idleness? Wouldn’t I wind up in the spirit world anytime soon if hunger kept assaulting my body at that rate? Imagine how much harder it was for my younger siblings to cope. Yet it is a staple slogan on dad’s lips during family prayers that children are a heritage or something, continuing with “blessed is the man whose quiver is full of them.” Mother would grunt and one or two siblings and I would squint to see who else was hearing something interesting. Honestly, I wondered which was more inexpensive for my parents to have deployed, commonsense or condom? Either, good; a combination, even awesome.

I had to swear poverty in my lineage would end with me. How it would, I was unsure; I was intent nonetheless. And that was why I heeded the suggestion of my best friend with whom I shared all things, penury inclusive. He advised we consult someone he heard could turn our lives around. I was about to ask in what direction, but was certain any route other than where my oversized family was headed was just about better. Odim claimed the man was a spiritualist. Spiritualist. The first three letters of that word started to seem sketchy the moment we entered his charm – odor and feather-littered house – and thirty minutes into hearing what the recipe for our becoming young millionaires was, I concluded ‘ritualist’ was more like it. Not that it dissuaded my resolve anyway.

“You’ll be fine,” says Odim, bringing me back. If only he knew I won’t be fine. I can’t. “I can still manage without an ankle,” he said. “At least, it’s better than two legs and no money.  By the way, what part did you choose?”

I am thinking of how to answer when my phone rings. It’s my wife. A fresh glance at the caller’s image – her and my three lovely children – brings me no regrets over what I did to improve my lot. Parents’, siblings’ and lineage’s. That I may have overreached myself is a separate matter, but for someone to whom indigence was birthmark, heirloom and worldview wrapped in one, a happening upon the tiniest semblance of wealth may have you pursuing it to the furthest end of that spectrum, if there ever was one. So, I accept this fate of mine. Only that I won’t go down alone.

While Odim is looking away, I snatch his penknife key holder and lurch at the dibia’s throat, jabbing without care. Warm red fluid does not stop spurting onto his beard, my agbada, his cowries, and the picture of my adorable family on the phone that is ringing unattended.

It is too late for the dibia when my shocked friend yanks me away. I spare him the burden of asking me why I did it.

Bunmi Oke comes up with flawless, norm-bending, and record-shattering stories er… in his head. Every once in a while, he’s lucky to get them down. His tales are strewn over AFREADA, Boston Literary Magazine, 81words, Drablr, 101 words, Lifewords.org, and someplace else he doesn't seem to recall. He lives in Ibadan and tweets at
@bunmi_oke.