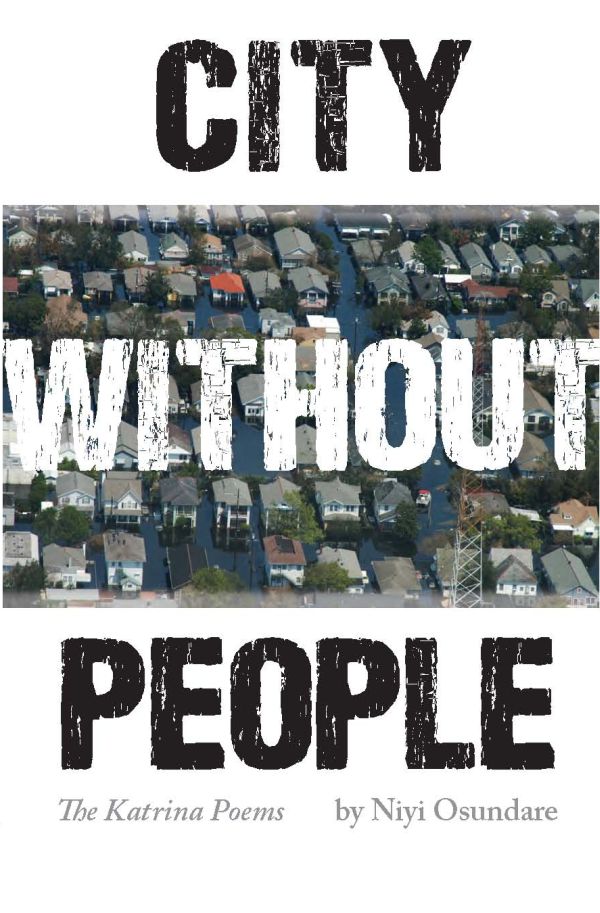 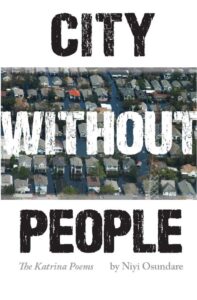 The poet, scholar and social critic Niyi Osundare recently published a collection of poems. Something is strange about this collection. It is the first of the prolific poet’s works which preoccupies itself with issues outside Nigeria. All the poems in City without People are about Katrina, the hurricane that nearly sacked New Orleans in 2005.

The poems are therefore Osundare’s strong feelings concerning the survival of a city and its inhabitants. It is first about his own survival – the astonishing truth that the poet and his wife, after being trapped in the attic of his house for hours without food and ventilation, survived Katrina.

The book contains over fifty poems, prefaced with a short essay entitled “Beyond the Invisibility of Pain”. While relating the background of the poems to the reader, the essay attempts to capture the depth of Osundare’s trauma, and the ultimate urge to poetise such trauma.  The book is divided into five sections: “water, water!”, “after the flood”, “the language of pain”, “Katrina will not have the last word”, and “afterword”.

In the first section, there are poems such as “The lake came to my house”, “Katrina Anthem”, “Liquidity city”, and “Tell me, rain”, which present the utter helplessness of man in the face of violent nature. Osundare is characteristically angry in some of the poems. In “Katrina anthem”, for instance, the persona bursts out:

Ka ka Katrina, shameless witch
Who quenched our lights and swamped the switch
Atop your stick and stormy broom
You spread your rot from room to room.

Images of water, of wind, of the city, and of cowed humans gain currency in the poems grouped under the first section.

The poems in the second section are rather retrospective, with titles such as “Anniversary”, “This time last year”, “Postmortem”, and “Katrina’s diaspora”. They provide an insight into what happened to the victims of Katrina, especially in the period immediately after the disaster. Pains and losses at Katrina are represented in probing tenors, in critical tones. While the subsequent sections largely contain poems that reveal Osundare’s deep-seated appreciation to those who came to his rescue, in kind and cash, during Katrina, the reader will discern Osundare’s usual critical voice, as the poems interrogate, with satirical punches, what the poet sees as the US government’s inefficiency in responding to the disaster. There is a sense of indictment in the first stanza of “Katrina snapshots”:

While the political leaders trade blames, New Orleans, in the words of the poet, becomes a “‘Third World America’ / with half a city / stranded on the roofs”.

The most philosophical poem in the collection is titled “What Mother Said”. Also the longest, it relates the anguish of a woman, in Africa, who is agitated that her beloved son would have been lost in Katrina. This is supposed to be Osundare’s mother in far away Ikere-Ekiti, his birthplace, addressing her son, her gods, and the entire world. On the one hand, her invocatory words come through as oriki (Yoruba praise poem) for her son; on the other hand, they come through as a petition to the gods to keep and preserve her son who is named after the Osun River (Osun-dare) in Ikere-Ekiti. Being named after the river implies that her son is a child of water and should therefore not be killed by water.

City without People is a collection which is unpretentiously biographical. Osundare is arguably the most autobiographical poet in Africa with volumes such as Moonsongs and Midlife. Other volumes, such as Village Voices, The Eye of the Earth, and Waiting Laughters provide generous information about Osundare’s birth, his parentage, and the landscape of his birthplace. Like Moonsongs which Osundare wrote immediately after surviving an attack on his life, City without People is a celebration of life, of humanity with the capacity to rescue itself from the violent hands of nature. But unlike Moonsongs, the new volume is deficient of Osundare’s usual enchanting imagery. Osundare himself seems to be aware of this: “If [the poems] do not come across as pretty to some readers, it is because the events which provoked them are far from pretty”. It is hard to take this as an excuse, though.

Noble Ones Are Yet to Be Born: A Poem by Stephen Charles Kenechukwu

I Am Still Eager: Poems by Uduma Kalu

A World full of Characters: Kabu Okai-Davies at the 2016 Bookworm Literary Festival