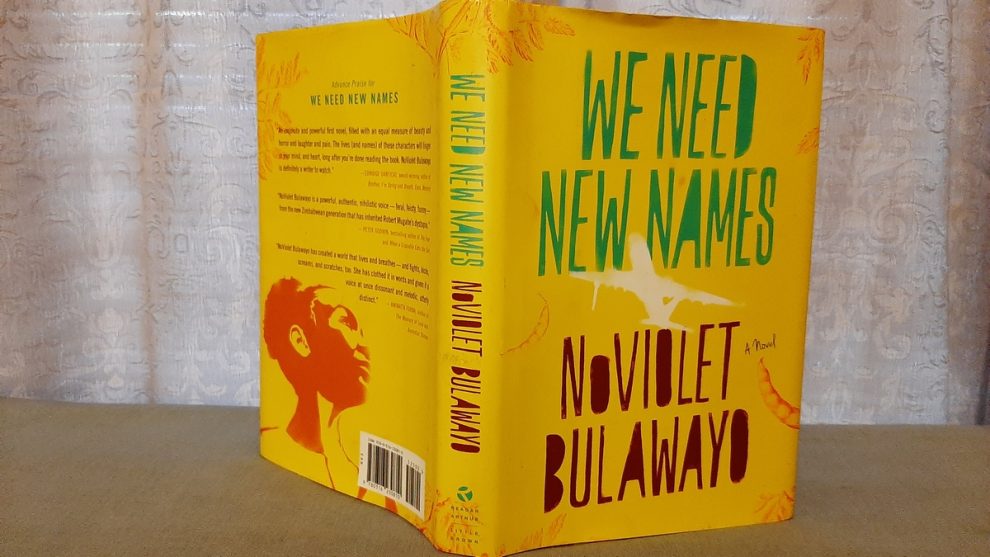 A review of NoViolet Bulawayo’s We Need New Names

The intriguing thing about NoViolet Bulawayo’s 2013 debut novel We Need New Names is how well it carries the voices of children. It captures their positioning within adult contexts like a photograph; the way they engage in and absorb adult life with such detachment; their acute observations relayed in obtuse vocabulary. As an example, only a child like the ten-year-old protagonist Darling could relay frustrations of faith and religion with a breathless tautology:

You pray and pray and pray and nothing changes, like for example I prayed for a real house and good clothes and a bicycle and things for a long, long, time, and none of it happened, not even one little thing, which is how I know that all this praying…is just people playing

Then there are the insights that children deliver. With such precision that it is unbelievable that nine times out of ten they have been stumbled upon. Bastard, Darling’s eleven-year-old friend, questions the desirability of a heaven in the sky, observing that

Heaven is boring…just plain and white…too orderly. Like there will be crazy prefects telling you … Do this, don’t do that, where are your shoes, tuck in your shirt, shhh, God doesn’t like it and will punish you, keep your voice low you’ll wake the angels, go and wash, you are dirty

Through Darling’s first-person narration Bulawayo tracks the numerous inflections in a child’s sentiment and ideas as they go from their tweens to their teens. It is as if the author herself were getting older as she wrote the book.

The story is of the growing pains of a country struggling with a new democracy. Having been liberated from colonial oppression (like most African countries at some point) the people find themselves shackled by a new master with skin the same hue as them (like in most African countries at some point). The anchoring event of the story is an exercise undertaken by the government where they displace certain citizens in the interest of creating upmarket suburbs. The experience creates nomads of the now free citizens forcing them to call multiple places home. An older Darling, reminiscing about a home she has left for seemingly greener pastures, describes personal definitions of home; the home before the new government bulldozed their house and broke up a family with a happy mother and a working father and the home in the shanty town of Paradise in which they are forced to live out of makeshift tin houses. She attributes three homes to her mother; the home where black people were oppressed by whites, the home where freedom brought a prosperity that raised the standard of living up by a few brick houses and the home so small that Darling has to pretend she’s sleeping when her mother sneaks in a lover in the middle of the night.

Through all this Bulawayo captures the core tenets of a black nation wanting in true salvation; the discontent of loss, the courage of hope, the despair of ceaseless strife. Darling observes the adults yearning at a time when general elections are set to occur, and how:

Now when the men talk, their voices burn in the air, making smoke all over the place. We hear about change, about new country, about democracy, about elections and what-what. They talk and talk, the men, lick their lips and look at the dead watches on their wrists and shake their hands and slap each other and laugh like they have swallowed thunder

But all that pomp is popped when the elections are rigged and the outcome is the bloodshed of innocent young men who dare to dream of freedom and fairness:

That made the adults stop talking about change. It was like the voting…had not even happened. And the adults just returned quietly to their shacks…Now everything is the same again, but the adults are not. When you look into their faces it’s like something that was in there got up and gathered its things and walked away

The story progresses with Darling doing what most young Africans in novels are prone to do – flee to other lands. Like Ifem in Chimamanda Ngozi Adichie’s Americanah and Julius in Teju Cole’s Open City, we are treated to an immigrant’s vantage point through the lens of disillusionment and amazement in the land of the Big Mac. Darling moves in with her aunt Fostalina in Detroit Michigan. She attends a local public school where she finds the American syllabus so basic ‘…even a donkey would pass’. Her early American life is captured mostly by the country’s language and accents. Darling finds that in order not to bring attention to herself (an attention laced with condescension) she needs to emulate the TV shows she watches. She needs to pronounce words with those well-known drawls and keep her vocabulary in vogue.

I … have my list of American words that I keep under my tongue like talismans, ready to use: pretty good, pain in the ass, for real, awesome, totally, skinny, dude, freaking, bizarre, psyched, messed up, like, tripping, motherfucker, clearance, allowance, douche bag, you’re welcome, acting up, yikes

The story that Bulawayo puts together has echoes of the typical African expatriate writer. Girl lives in an African country and dreams of leaving; girl leaves to America and finds it is not as appealing; girl yearns for home country in that Joni Mitchell ‘don’t know what you got till it’s gone’ kind of way.

We Need New Names has an interesting structure. The book started as a short story called ‘Hitting Budapest’ which was published in the Boston Review and won the Caine Prize for African Writing in 2011. Pulling at that thread, Bulawayo made the short story the first chapter of the book and weaved from it the character of Darling as she progresses from age 10 in Paradise to around age 14 in Detroit Michigan and then to what must be age 17 or 18 in Kalamazoo Michigan. With each year that passes Darling is co-opted into the world of the grownups, engaging in the politics of race, gender and class less from the distance of an observant child and more with the tethered constraints of an adult. Bulawayo mirrors this aging with the intermittent placement in the book of three poem-like texts at chapters 5, 10 and 16 each titled ‘How they appeared’, ‘How they left’ and ‘How they lived’ respectively. These seem to preface different stages of Darling’s story. ‘How they appeared’ is about the creation of the shanty town Paradise from the ruins of suburbs reduced to rubble by a government agenda. ‘How they left’ is about the cross-border search for prosperity as the residents of Paradise try to earn a living in various countries on the continent and abroad. ‘How they lived’ speaks to the disappointments when what is meant to be green pastures turns out to be brown mud in the form of menial jobs, life on the fringes of society and the gradual deterioration in culture and identity found in foreign geographies. In the first two texts, Bulawayo uses the third person narrative to describe ‘them’ – the ones that appeared and the ones that left. In ‘How they appeared’ she writes

They did not come to Paradise. Coming would’ve meant that they were choosers. That they first looked at the sun, sat down with crossed legs, picked their teeth and pondered the decision…They just appeared

In the third prefacing text, Bulawayo uses the first-person plural form “we” to describe those that live the experiences of immigrants in countries that are not theirs:

Because we were not in our country, we could not use our languages, and so when we spoke our voices came out bruised. When we talked, our tongues thrashed madly in our mouths, staggered like drunken men

In the timing of the first two prefacing texts, Darling is a child – still removed from “adulting.” By the third prefacing text Darling is recycling bottles and working shifts at an American restaurant, enduring all sorts of African stereotypical rhetoric from Americans. She is well on her way to full adulting. The technique of switching the pronouns from ‘them’ to ‘we’ echoes Darling’s positioning relative to the world of the adults. It must be these techniques that charmed the Booker Prize judging panel who shortlisted We need new names in the 2013 fiction category, making Bulawayo the first black African woman to be shortlisted for the prize. The first black woman to win the prize came in 2019 with Bernadine Evaristo’s Girl, Woman, Other which also employed interesting technique in its delivery.

The intriguing thing about words and names is that they represent shared experiences. It is where they derive their meaning. As an example, we experience the author of We Need New Names as NoViolet Bulawayo even though that is a pen name, substituting for her real name Elizabeth Zandile Tshele. But having experienced her through the pen under that name we have no trouble associating with what is for the most part a fictitious character. Such is the power of the shared experience of her work. In some cases the experiences transcend the need for naming. As an example, we know that in 2006 Zimbabwe had the horrific experience of Operation Murambatsvina, where the government destroyed peoples’ homes in a ‘clean up’ operation that was condemned around the world. And while the shanty town of Paradise and the suburb of Budapest are fictitious and Darling’s home country is never named in the book, there are no doubts as to the setting of the story. Perhaps a hint by Bulawayo that not only do we need new names but we also need new shared experiences.

Fear is that thing with no Name: Poems by Amina Dauda Oseme