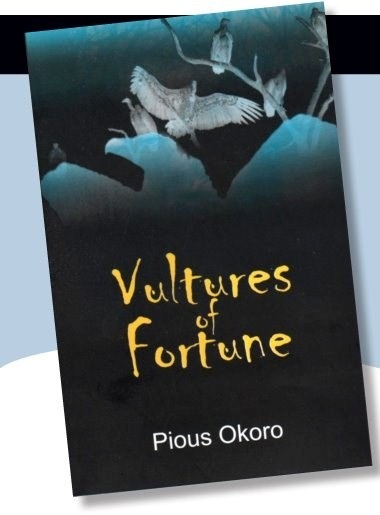 Vultures of Fortune: A Book Review

There are times when I have followed literary wisdom from the western sage that to be a good poet one must write and think like William Shakespeare or John Milton. The works of poets who are “good” or even “great”, I used to reason, must be popular and historical. This logic also applies to African writers and brings to the forefront several reasons why Vultures of Fortune should be of interest to any reader of serious poetry. 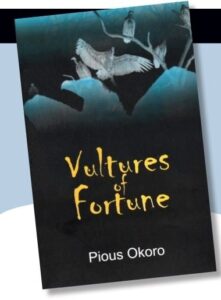 To understand Vultures of Fortune is to understand a normal man’s protestation against the injustice that he sees all around him and in his native country. I believe Vultures of Fortune, as its name reveals, is a book that explores the nature of betrayal and vain promises men love to make to their fellow human beings. When a vulture feeds on a carcass it did not kill, it is in fact reaping where it did not sow.  In essence, this sums up the story of the activities undertaken by greedy multi-national oil companies in Niger-Delta, an oil rich region in Nigeria where most of the country’s wealth comes from.

The Niger-Delta has produced many talented writers who have sought to voice out her pangs through poetry. The world would recall the late Ken Saro Wiwa, an activist in the early ‘90s from Ogoni land, the ethnic village of the Ogonis in Niger-Delta, who tried to use poetry and oratory to raise awareness about the plight of the Niger-Delta people. The passionate Saro Wiwa was later put on trial and hung for treason against the Nigerian government. Wherever and whenever there is injustice, there will be profiteers and charlatans; Pious Okoro makes this keen observation in Vultures of Fortune.

In my estimation, Vultures of Fortune is not just a collection of short poems but a poetic work filled with protestation in the midst of injustice perpetuated by cunning and crooked human beings. How one man obtains his riches may be more hidden than meets the ordinary human eye.  Racial and ethnic discrimination seems in the 21st century fabulous to the denier of such unless he or she has encountered one personally. A leech, like an opportunist, operates like a vulture. Okoro does well to depict foreign oil exploiters as people “who lay golden eggs in distant lands where their nest are built.”  In the poem “Before Oloibiri”, the unlucky village where oil was first discovered, Okoro in Vultures of Fortune metaphorically describes the multinational oil companies and its key ally, the Nigerian government, as having abandoned the village, its people, its concern and welfare “like a harlot after the exploits.”  Though Niger Delta is a now a veritable oil mine, Okoro notes that it formerly was a place “where mosquitoes once guarded bravely from desecration.”

Now if you have ever experienced the loss of a close friend or a relative, you should find Okoro’s poem written for a late childhood friend, Chinedu Isiodu, very poignant.  In “The Way of Man” Okoro states that in life there is a “shrouded mystery mortals would always face.”  I do not believe a real mad person is one who has been declared as such by a mental institution, be it public or private. So who are the real mad men of today?  In “And we Call them Mad Men”,  Okoro illustrates how garbage searchers, naïve fellows who fall victim to the opportunists or vultures, and poor fellows who could barely provide shelter for themselves are all mad men.

When you have to prove that you are an American or a soul brother, then you know that racism and stereotypes often go hand in hand. Though I am a natural born American with an accent and I am “African looking”—so I have been told — I can share the sentiment of Okoro  in the poem “I, too, I am a brother” when you have to prove yourself to someone or a group of people that you are no different than they are. Therefore I can boldly say that “I, too I am a brother” and no less an American than a second generation Irish or German American. Okoro protests:

“I  plead to be heard
I, too am a brother
The one, who was spared
The sea experience
But made it to the land.”

“Drunks parade tokunbos
The good ‘n’ the worst
The West seeks to dump
In the wastelands
That produce nothing
But receive everything
Like the open sea.”

But Okoro’s book leaves us with the question: where do we go from here?  I once heard a wise witty saying from a psychologist on radio that “in order to deal with a problem you must identify it.”  I agree with that statement absolutely!  But I say in regards to the problems revealed in Vultures of Fortune that not only must we identify them and the causes but also provide solutions for them—some means of alleviating the plights of Niger-Delta inhabitants, if not, eliminating them. If the Nigerian government and its’ Western oil consumers who serve as allies for “color blind” exploitative business overtures cannot assuage the pains of the Niger-Delta, the privileged Nigerian who lives as an expatriate in the west or the privileged “oil expatriate” or better still the privileged Westerner who indirectly benefits from the region through oil purchase and technical mechanical support, should have some compassion and even guilt to help out the poor of the poorest who live there. There has been no time in which we need too much doing as opposed to too much saying about the injustice and poverty we see all around us than in the 21st century.  May God help us and give us wisdom.

A Gift from the Gods: Fiction by Ify Tony-Monye

Our Horizon: Poems by Gbolahan Badmus

Ballad of the Peace-Keeper: Poems by Maik Nwosu