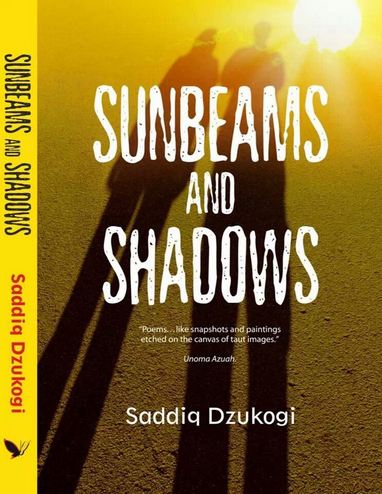 Artist metamorphosise as maturity in age and experience sets in; this is a special design by nature. Experience comes with a deeper understanding of self and the society in which the individual finds himself. It is customary that an individual’s life reflects the realities of his society. Now, is not a favourable time for a conscious and conscientious artist to idle in fantasies, in these times of ugly realities occasioned by the inanities of the political class and negative global influences. One would not be surprised to find a sane mind engrossed in beaming his torchlight on these issues that are almost becoming a part of our daily life. Saddiq Dzukogi is a young artist confronted with the challenges of taking a stand both as a social critic and a pathfinder, proffering alternative solution to the attainment of a meaningful life in a society ruled by satanic instincts.

Saddiq Dzukogi’s writings have matured through the years. His journey into the world of writing is not one of happenstance but one of nature’s design, being the son of a writer and poet, BM Dzukogi. He published his first work of poetry at the age of fifteen ‘Images of Life’, when most of his peers probably were still day dreaming and fantasizing over delusional ambitions. His second collection ‘Canvas’ came out in 2012, and now with a third, Sunbeams and Shadows. The young man has come of age both as a man and as an artist of class. The artistry and aesthetics in his latest offering is a reflection of life and nature’s abundant mysteries. He has outgrown those teenage experiences captured in his first work Images of Life and the fantasies of adolescence that characterise his second collection, Canvas; he now wears the garb of adulthood, and is confronting the realities of the adult world; the result is Sunbeams and Shadows.

Sunbeams and Shadows is a collection of eighty-Six poems spread within three sub-titles that include Continuum, Silent Pixels, and Homage. The one hundred and ten page book is published by Origami, an imprint of Parresia Publishers limited, Lagos. The well designed book is of fine quality and the poems gush with ripe innocence, a quality of true beauty. The poems talk about love, pains, philosophy, uncertainties and the absurdities of life. The collection’s romantic ambience is as effective as the lamentations therein.

Saddiq Dzukogi is a child of philosophy, a trend that is becoming synonymous with his offerings. The first part of this collection exudes philosophical cogitation that reflects his consciousness of nature. For example, in the poem ‘Life’, the persona nags about the emptiness and endlessness that life is,

‘‘Life is a fake orgasm/Hyperbolic illusion/Harvest of shapeless mirages/Falling like dew drops/On the bosom of time-/It holds no meaning!/Its eyes are worn out/By its fast race/Its palms hang open in space/Yearning’’. The poet in this poem asserts that, life is a harvest of shapeless mirages (emptiness), worn out by its fast race. Indeed, we can attest to the haste with which life drives us into the abyss before we even realise who we truly are and what our purposes are on earth.

The duty of the sunbeam is to illuminate the dark (Shadow) and cast light on our paths. Saddiq Dzukogi’s collection is the sunbeam poised to ‘’Assess the shame of our shadows,’’ the question is whether we would be willing to accept the results of this assessment.  The poet in the poem ‘Life’s falling apart’ on page 63, laments the unfortunate life that characterises his existence. In fact, he wishes for death as an end to his travails.     And who is not tired of living in this dilemmatic society of ours?

The persona, by the end of the poem, becomes so impatient to the point that he wishes for a life where there would be no ‘switch to turn him off’, (Heaven/Paradise). The travails of the persona are same to those experienced by ordinary Nigerians every day. The last stanza of the poem ‘Fossil’ p.73, perhaps explains better the dysfunctions of the world the poet is writing about.

“I live in the recesses of my addiction/Bitter ambience/Taint my innocence/The world’s tongue taste of myrrh/And now I am a spit sucked/By a hungry earth’’. The persona like every one of us in these times has accepted defeat by concluding that he is ‘a spit sucked/by a hungry earth’. The ‘world’s tongue’, according to the poet, tastes of ‘myrrh’ a kind of pre-preparation of the tongue before we are ‘sucked’ by the ‘hungry earth.’  But are we not sucked dry every day in this nation by the fangs of Boko-Haram, poverty, pains and corruption?

The poet displays his knowledge of world politics and the deceitful antics enacted by the Western imperialists who are desperate to control the world’s economy. Like the late music legend Fela Anikulapo Kuti, the poet dramatizes the poli-tricks (politics) of the West asserted via a purported democracy.  Hear as the persona mocks them in this piece: ‘’Bomb Iraq for oil boom/Them-all-crazy/Not to see you in your form/Demon-crazy/The rats of Libya/Feast on ribs/Till light kiss flesh to bones/Them! All crazy/Pinch Arab into a spring/that snatches thrones/from those you name; /Traitors, tyrants, dictators/for failing to be the arm-rest/Of ghoulish vent/Them-all-crazy/I swear’’. ‘Them-all-crazy’ p.80.

In the above poem, the poet satirises the West and their cunning ways and like Fela, he describes them as ‘crazy’ and spells democracy as ‘Demon-crazy’. A term Fela defines as a ‘demonstration of craze’. Well, is this not the life of a poet, to represent the realities of his time?

The last two stanzas of the poem ‘Dear Heaven’ reflect the solemn prayer that should be on the lips of everyone who craves a new dawn amidst these threats to our existence. “That May/may spring/From the grave of silence/Of unconscious past/ And clean this gulf/of gaseous nothingness” 2. “Nature is in labour for new days/And the sins of yesterday/Must set with the sun/Or sit with our tears” p.37. The persona asserts here that we must endeavour to wear the smiles of hope and optimism and look up to the Heavens just like the persona.  And the poem in another light could be suggesting that we take the bull by the horns.

Sunbeams and Shadows is a collection of rhythmic poems garnished with imageries that reflect the failure of the past, the adversity of the present and the uncertainty of the future in a criminalised world of escalating calamity and confusion of purpose, which is consequent of a dysfunctional political and economic order. The poems exude the aura of metaphysics; love, religion, conceit and philosophy. Perhaps, the words of one of the masters of his time best describes this collection of average diction, fine lines and engaging metaphors,

‘’These poems are magical, gripping and terrific. Because of their brevity, stimulating images, and enchanting lyricism, they remain persistent tunes in my head long after I have read them’’, E.E. Sule says of the poems. The poet has done his job of reflecting the realities confronting him a chaotic world. It is now the duty of readers to make meaning out of the poems in the collection.

‘Window 8’: A day at Walter Carrington – A Short Story by Eghosa Imasuen

Her Eyes: A Short Story by Sandra A. Mushi