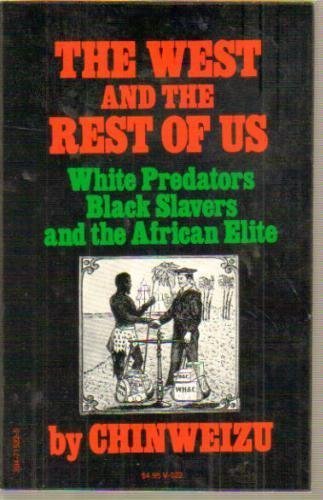 A few days ago, some friends and I exchanged ideas on the nature of the Nigerian mentality, part of whose characteristic is mob-temper. That left me thinking wildly and asking questions. Are we Nigerians, by nature, given to mob-temper? Can this aspect of our life be explained? Is there anything like “the” Nigerian mentality? What follows is my attempt to give some explanations at least judging from Nigeria’s short intellectual history.

Very few African intellectuals have been as productive and consistently relevant as Chinweizu. I read The West and the Rest of Us in 1983 as an undergraduate. My professor had us read The West alongside Areoye Oyebola’s Black Man’s Dilemma. It was depressing to read these books, but they rattled me out of my intellectual and moral slumber; they greatly influenced my attitude to the West and Africa.

In many instances, no two books could be as divergent as these two are. Given my tender age at the time, coupled with the fact that I had left my village for the first time, I dismissed Oyebola’s somewhat self-effacing, blunt, but largely factual analysis of Africa’s problems. At the same time I welcomed Chinweizu’s equally factual and frank portrayal of the West as opportunistic, brutal, manipulative and morally debased.

The other half of Chinweizu’s discourse is his dismissal of Africans who have become willing partners in Western exploitative machinery either by actively cooperating with Western international concerns, or by imitating Western culture. Our class might have misread a particular chapter in Chinweizu’s opus, “Schizophrenia in the Arts and Culture,” but one dominant idea we got from it and which remained perennial in my mind is that of return to the roots as one of the panaceas to Africa’s ailing creative spirit.

Chinweizu is very successful in what he does for the very reason that his arguments are more visceral than logical. His major technique, which is eminently displayed in his already cited work is to sow the seed of guilt in the African mind. It is guilt that is supposed to haunt one for having turned one’s back on the very African culture that has been humiliated by the West. Guilt is programmed to induce the mind to defend the supposed weak and humiliated person. This, it does by attacking the attacker. The mind is at an alert mode, ready to go into combat anytime. In the course of time, this combative mode morphs into an existential state, a way of living, with attendant moral implications.

The guilt of abandonment of one’s culture translates into the belief that an openness to other cultures, especially Western, is tantamount to a destruction of one’s culture. This of course, has to do with the fact that yours is weak and should be protected. Thus, the moment you catch yourself admiring any Western cultural idiom, a hidden voice deep within whispers: Be authentic! Don’t abandon your culture; don’t be a saboteur. Why, after all, would I be on friendly terms with the culture that colonized me, the culture whose thinkers (Hegel, Kant, Voltaire, Levy Bruhl, Thomas Jefferson, Conrad etc) labeled mine as primitive? I am therefore obligated to also dismiss that culture and their talking heads. I am not supposed to forget what they represent: imperialism, colonialism, capitalism etc. These ideologies are inextricably tied to the West, and merely mentioning them promptly arouses in me a high degree of venom. Perhaps justifiably so. Once my venom is sufficiently aroused, I am led to believe that merely spewing it already justifies me and my people’s culture.

There is little doubt that the delusional moral worldview thus created has greatly colored Africa’s intellectual and moral approach to the world; it has hindered critical engagement with reality. African dictators and political opportunists have been the greatest beneficiaries; they readily feed off of it. They only need to throw in some of the well-entrenched anti-Western terminologies, rouse African native rancor toward the West, and while we are ginned up to fight the West, they tighten their grip on power; they dictate our discourse. It is not surprising that Africa has this mentality in common with the Middle East, where democracy is nearly a curse word, and where ordinary people appear to be content with venting their anger on Western objects of symbolic importance and thereby believing to have sufficiently exercised their right to free speech. Yet the moment they raise their voice against their society’s oligarchs or monarchs, they or their families suffer the consequence.

It turns out that we Africans have guilt of abandonment on the one hand, and combative state of mind on the other. Each of these, visceral enough, hinders the mind from engaging in a somewhat impassioned analysis of the world. In each of these modes of moral being (moral because of the feeling of being on the side of good as opposed to evil), the individual is torn apart because she is forced to stand outside of herself; she is forced to tread on her convictions, acquired through her own engagement with the world. A part of her recognizes that some aspects of her native culture no longer supply adequate answers to most existential questions of her times, yet she is forced to cling to those aspects for the simple reason that they are her people’s heritage. The inner conflict arising from that conversely feeds her frustration with the world. With time her frustration morphs into hostility and spite of her world. But she is afraid of acknowledging to herself that she truly hates her (people’s) world. So, not coming to terms with this, her mind engages in a petty hide-and-seek, a Janus face that allows her on one hand, to avow love for her people, but which indeed is not far from a rejection; on the other hand, she condemns the traditional enemy, but in truth this condemnation is superficial, a masked admiration.

The cat and mouse game the individual plays with her mind, of course, is part of the delusional aspect of the combative mode, which fits into the presumption that being the accuser already confers moral authority on one. It does appear therefore that in this respect, the only thing one needs is to do is pronounce: J’accuse! The West is bad. Well, if you are not the first to accuse, then please be the one to do so most loudly.

The West and Rest of Us had enormous influence on most African intellectuals who came of age in the last twenty years. I think it still continues to wax its enormous influence. In many of those who have been influenced by the discourse strategy in that book, in fact, in most of Chinweizu’s works and Walter Rodney’s How the West Underdeveloped Africa, there is the strong tendency to mistake strings of curses and offhanded dismissal of the other for a demonstration of intelligence, moral decency and a command of Africa’s discourse. The truth, however, is that they have allowed their states of injury to dictate their moral world. Their states of injury become a breeding ground for mob-temper, which is born of the feeling of being in the right.

It turns out to be that aspects of our perceived or real mob-temper can be traced back to the dead-end reactionary intellectual response to our common experience of oppression at the hands of our colonial masters. This response has largely shaped the Nigerian mentality. Since we can no longer justifiably accuse the white man as responsible for the Nigerian malaise, we go through a state of injury whose cause is amorphous. This is, of course, not to be divorced from our more than three decades of brutal military regimes that finally broke any spirit of organized resistance.

Having experienced their dignity trampled by any person in uniform, Nigerians are justifiably injured, justifiably sad. Every one is on edge just like the proverbial dogs in a manger. And like dogs, most Nigerians feel that it is better to bark before you are barked at. They are therefore understandably combative. To me, though, this does not mean that Nigerians are essentially hostile. Their mob-temper is essentially a cry for help.

Yet, it needs to be pointed out that this combative attitude feeds off of itself. It becomes like the proverbial snake that bites its tail. Rather than create a healthy atmosphere for community deliberations and healing, it engenders a broad atmosphere of distrust. We fear one another as necessarily bellicose; the other is just out to get us. This atmosphere is unavoidably conducive for dictatorship because since everyone barks, the one who barks loudest or, like dogs, bares the strongest fangs ultimately wins the argument, becomes the Alfa dog. Here comes our readiness to insult the other, dismiss his/her ideas as infantile, especially if this person does not share your worship of certain figures or ideas.

Can my enemy or my former enemy ever be right? Can he posses a smidgen of truth? The answer to this question might well reside on whether we are able to reboot and let go of our corrosive state of injury. The answer might well determine our survival or lack thereof.

One Star for the General: A Short Story by Amatoritsero Ede