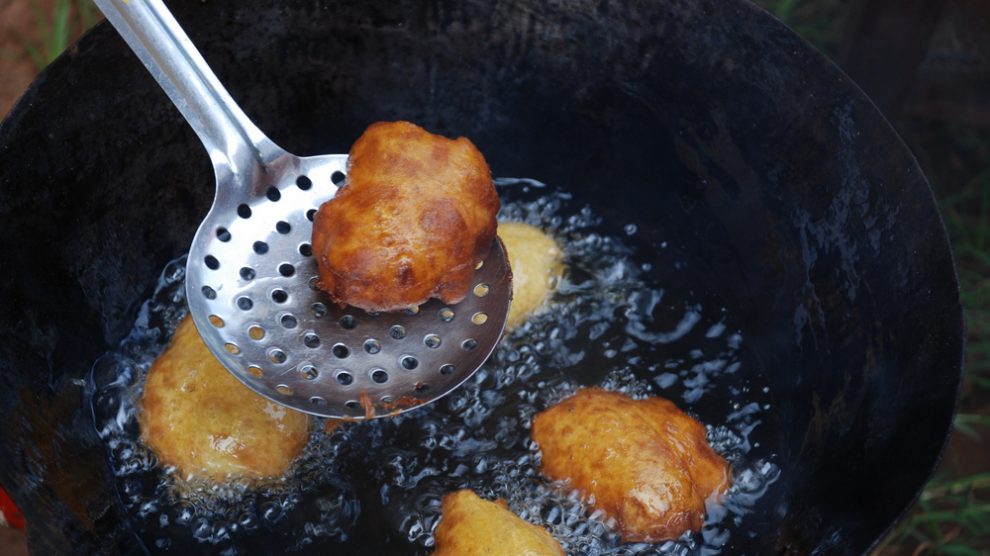 In the early Monday morning
When it’s so cold that breath forms
The local area pastor begins his other seven-to-seven job
Off with his bible and holy water
In their stead, he grabs his karayi and cooking oil
Transitioning fully into a mighty fine baker
Ruling like no other in his craft
He freshens up his humbling mabati kibanda
Exceptionally neat and orderly
in the way he lights the firewood in his three stones fireplace
The fire also serves to keep him warm against the biting morning cold
His young impressionable son is also there as his helper, the spitting image of his father. Obediently following instructions to the letter, he goes on to methodically knead and segment the dough
On a wobbly makeshift table
As the oil simmers to a flaming hot
The first batch of four is thrown in the blazing karayi
And the neighborhood is awakened on drooling palates
To the tantalizing and scrumptious aroma of the rising and glistening mandazis
unpretentious mandazis
These delectable pieces of heaven
Literally touched and carved by the hand of God
Possibly lacking in some presumptuous sophistication
That’s synonymous to Nairobi’s eateries, where there aren’t just mandazis
But pastries – donuts, bagels and the like
Yet this simple baker keeps at his simple mandazis,
Filling and brown mandazis
That have a variety of people lining up to have their fill
Women and their school-going children
Young people headed to their workplaces
Construction workers ready to seize the day
Even the workers coming in from their late night shifts
Not forgetting the stay at home personnel that rouse from slumber before the hot and fresh mandazis run out
We all convene at the baker’s and socialize
Come rain or shine

My grandma, bless her heart
on my graduation day told me in all her wisdom
umesoma kutosha, now go be a woman
you know what I mean ma
Never mind that I was a tax-paying 25 year old
but to her still a little girl, so I smiled and nodded
like a good girl.
Got me thinking though about all these manufacturing processes
all the wringing and drying in ‘factories’ that’s more mess than sense
that prequel to ‘successful’ womanhood;
Make sure to act like a lady
Do not let them see you sweat
Mind your manners
as much as you mind your business, of course all while drinking plenty water
The constant remittance of counsel, direction and misdirection in equal measure
it never stops, you imagine adulting offers the freedom and independence
the emancipation to finally have some choice words
and stream a few imaginative expletives that would make a pirate grin like a Cheshire cat,
carefree enough to unashamedly not give a flying hoot or a rat’s behind and just be lit af
How utterly tiresome and unremarkably passive
having to pretend perfection, always strive to reaction
work hard but not too hard because that’s a tad too aggressive
or else however will you keep a man ma?
Heartache? Drink tons of water,
and then two weeks later,
why don’t you have a man ma?
Don’t you have aspirations girl?
Stand up and be counted
be seen but not so much heard
you know the drill ma
Don’t try to run off the mill ma
runners will be brought to their knees, reduced to nil and shunned away
Sure as the dust blows
so will the flag at half-mast flow
on sight at the ‘factory’ churning out replicas honoring the ‘lost ones’
Don’t start none won’t be none

Mercy Eni Wandera is an opinionated and phenomenal woman. She is a passionate up and coming writer and quite recently started putting her thoughts down onto her personal blog (mercyonmeweb.com), which she takes a great deal of pride filling with poetry, juicy storytelling, music reviews and literature.

Our Lantern Is Lifted for our Saviour: Poems by Adeola Ikuomola

Materialism and Stereotype in Born on a Tuesday