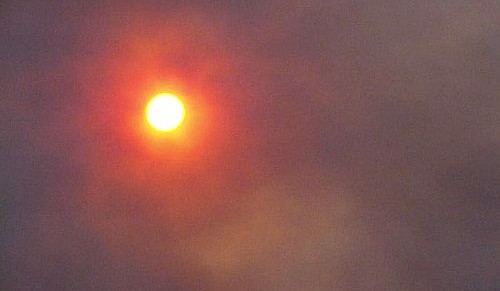 My brother and I believed in ghosts from an early age.
When we were little we thought they would haunt us to an early grave.
They drowned in the air like swastikas; armies in flight.

When they went missing we would try to find them
Again picking on the words black, shelved, barren, lit them up in the
Orange sky as if it was a furnace burning at Auschwitz.

I wanted to be the woman who gave you everything.
Instead I came with darkness, a wreck that was visible, cats,
So I hunted my brother down; swore him to secrecy.

I could see the boy in him still; even in the fog – with
Flecks of blue marbled sky dissolved in his eyes I kept him safe,
Warm; beguiled in my arms before I let him go.

IN THE NATURAL BACKYARD OF POETS

Here you will find golden pauses between acts;
Ends of affairs, pangs of love and where an ache will not subside

Here, the clinging, useful comfort of strangers
Tucked away in the wells of loneliness in the thick of things;
Butterflies whose paper-thin wings melt in the air

Here, patches of beads are worked intricately at a snail’s pace,
As white horses in playing fields, prayers in temples, a home for words
God’s little selves; others

The strength of an army, a swarm, an exit, human bodies
Only later you will realise that there are limits and boundaries
Bars at the windows to keep the ghosts out

Webs carry lisps of substance, wounds that are slow to heal –
Where broken links surface like Yoruba girls dancing barefoot in the
Rain; it feels like the Gestapo

As if I have drawn a zero – a mouth opening and shutting
Slicing through the air where it should not be – interpret is as you will;
This abacus, this alphabet

How do children grow when they do not play is like asking
How do poets fill themselves up cognitively when their minds
Are a black, alluring habitat

Until glory is all yours

A small, loosed hunger giving you grief inside your belly
That not even a mad man can cure

Mine for the taking

She appeared before me as if she came on the wings of an angel
Nursing me back to health; she never let go – mother kind.

STARS THAT BEGIN TO FILL THE NIGHT SKY

While we sleep, while we eat, while we dream in tides
Every night they make their tribal mark on civilisation
The yellow sunlight of the white sun has now dissolved
The din that suffocated us like a forest of trees is now

Thinned, walled in by rooms that are deathly quiet like
A mannequin’s paradise escape – the flurry of a tongue
On a belly; I can feel the heat of the wind floating on air
It’s not mournful at all; not like stories of the holocaust

Understanding the measure of loss of love is not easy
It simply takes possession over everything in your life
Left with a gold watch that could no longer tell time –
A staged, petrified memory in which there was no longer

Recognition of stealing touch and comfort out of routine
Silence has come and gone; suffered with the dark hours
I don’t know why I felt like nothing in your life – I cast
Words like stars into the night sky’s shadow; thrust them

Into predatory familiarity, the material of velocity, pieces
Of fecundity; imagery that we shared as sisters growing up
Speak, speak, speak now voyager, saboteur, even if your
Words come as an abortion of small nothings; with a splash of red

In slow motion; don’t hold anything back as you have done
For years: in war humanity behaves at its worst and you have
Done the same, I would only like to garner access to you –
To your private, imaginative world – I have loved you from

Afar for my whole life, alas, these cancer years sought a
Substitute, under stars laid attractions to spools, negatives
I trace your eyes, your wild hair; your teeth of pearls all in
One place with my fingertips self-consciously – they all say

‘Do not come too close’; up close you’re delicate, a flower
Whose blooms are not yet set in place – ripened by the sun?
Yet I feel you against my skin, after all aren’t we mirror
Images of each other born on the same day; years apart?

Here they come, here they come: salutary never haggard
These stellar posers; one by one not stentorian reminding
Me of your rounded figure built for comfort and not size
Tell me what you want to hear; a moveable feast of words?

When I was a child I was afraid
To speak to strangers; even then
I felt estranged from the human
Race, sought solace, a rare comfort

Childhood to puberty; a word I am
Still not very fond of; it meant growing
Up behind closed doors, shutting out
Dark voices; sensing there were no

Not as bad as some yet still locked
Inside a box with doll parts and the
Garden of a blank canvas perfumed
With the bright, still air of reality

Children can only be fragile warriors
But the canvas was uplifting and the words
Could all fit, musings, brick by brick?
The sun on its belly ripening even more

Poetry with keys, something absurdly
Supernatural in effect like the holier ark
Trailing behind the titan machine of my
Consciousness; sometimes the story

Begins at the end with no middle or
Beginning; sometimes not at all but it has
Educated me on so many things that blood
Is thicker than water and that families

Are not pulled out of the air for nothing
They exist to terrorise you, to bully you,
To grow you up into a worthy citizen or not
For the reasons that you think.

When I Go Into the Wilderness: Poems by Abigail George

A Child-Poet’s Beginning of Silence – A Review

When Words Fail to Leave: A Review of Footmarks