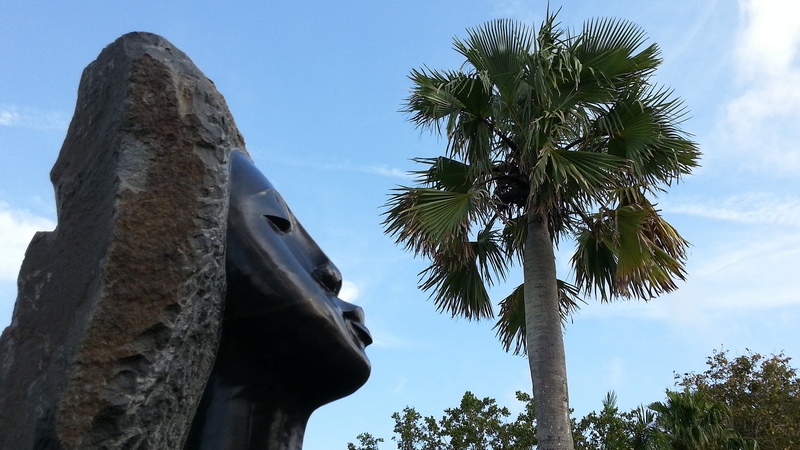 The One Thing I’d rather be

Not to witness the city council askaris swoop down on hawkers
or the newspaper vendor who is a part time pick-pocket, pilfer.
Not to hear the preacher hammer the word by the pavement
or the street child beg for two shillings, the repose of his crippled brother
on my shadow.

I would be a statue to be nothing, feel nothing –

Not the morning light on my back
or the scorch of the noonday heat on my forehead.
Not the pity of raindrops on my shoulders
or the cling of exhaust fumes on my metal-skin.
Not the blessing of a bird’s droppings on my cheek –

Nothing at all
because statues don’t feel.

brighter than a pearl
big-hearted and boycotted
yet celebrated
at the bourgeoisie garden-party.

Belinda beloved
a basketful of optimism
blessing on a feather
bougainvillea in bloom.

Necklace of the World

The necklace of the world is delightful,
a precious ornament worth clamoring for.
It knocks on the doors of the poor,
and sits at the table with the mighty,
eternally celebrating the plight of billions.

It is there at the mass graves,
all the mass graves you have heard of,
or seen, or dug.
It is present at every uprising,
presiding over the wars of the world,
keeping count as millions are displaced.

It demands to be adorned this necklace.
Takes up the best position where grand plans are laid,
who is to be massacred,
who is to be bailed out,
what is to be birthed, when, how,
never mind why.

Some, tired of the bother around frail necks,
have attempted to lift it off,
leaving the necklace no choice but to tighten,
its beauty an echo as they squirm and choke,
supreme nations brought to dust,
the memory of their fall still true.

Diamonds, gold, silver, guns, flour – it sets the price,
too high to leap over,
too low to crawl under,
just right to keep the majority grounded,
admiring an adornment they will never possess,
a mirage from generation to the next,
through eras of unrequited mercy.

World peace remains a façade,
The wearers blind to the hands that hold the clasp,
Mesmerized by a beauty reflected in a mirror of doom,
Misery cloaked in the glitter of sawdust,
Wouldn’t a matching pair of earrings be just heavenly?

To capture that special moment

Is like catching the light that dances on water

like watching the newborn smile for the first time.

It’s singing at independence as the union jack comes down
and the red, white, green and black go up.

To capture that special moment

Is a sip of old wine, the medley of a fond past
and hopeful tomorrow

It’s the certainty of second chances.

May Livere is a freelance writer and editor residing in Nairobi, Kenya. She has published online short stories on Angie’s Diary, Fiction on the Web and Africa Book Club. She was a runners-up for the September 2013 Africa Book Club Short Reads competition.

On the Flip Side: Fiction by Deleteh Bank