There is this thing called the Caine Prize for African Literature, whatever that means. People compete for it and someone invariably wins. There is a lot of noise making and jollification for a deserved win and the poor winner is expected to write a book. The poor fellow always obliges and dutifully produces a thoroughly wretched book. It hardly ever fails. There have been notable exceptions but one would argue that the writer wrote a good book despite winning the Caine Prize. One such wretched book is Harare North, written by the brilliant, perhaps gifted Brian Chikwava. He is destined to write a good book – once he finds his voice. It is just that right now, his toes are flirting with crickets while Africa is carrying elephants on her head. There are few books that have frustrated me more than Harare North. It is like staring in anger at a rich pot of soup ruined by an impish but talented cook. 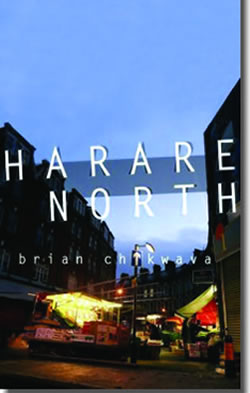 Harare North is a meandering journey undertaken by an unnamed main character fleeing imaginary trouble back home in Robert Mugabe’s Zimbabwe (you get the story already, sorry!). He heads for London (aka Harare North) and proceeds to lead a wretched meaningless existence.  Saddled with a not-so-bright friend named Shingi he immerses himself in the under belly of the immigrant community in London building tricks to stay above water. It is not a pretty book but this is not just because of the wretched lives these people live in the grimy underbelly of grimy London. This is an unfortunate book for reasons that are the fault of Chikwava and publishers eager to publish and sell reams of Africa’s dignity to a willing and gullible Western audience. What is it with African writers and stereotyping? In the 21st century many of them are still scheming their way into the pockets of gullible Westerners who truly believe that Africans are exotic lovable dolts to be watched like animals in a zoo.  I am not amused.

On one level, Harare North is a brilliant book, written by a brilliant, sensitive author with the potential of shining a compassionate light into the lives of immigrants of color living desperate, furtive lives in the shadows of London. And sometimes it works. Chikwava lays bare the tricks that immigrants turn to somehow survive in London. But then, what’s with the contrived English? Harare North is engaging and heart-warming, but the contrived English gets in the way, each time. It is like finding your favorite meal infested with tiny obnoxious stones. The book offers evidence of formerly elegant prose poetry ruined by reckless experimentation with contrived English. There is no linguistic structure to it because the language simply doesn’t exist. Profound thoughts become distressed babble under the weight of dysfunction. Not convincing, the contrived result. Chikwava has dissipated vigorous energy to write nonsense. It is funny but it is nonsense.

This is too bad because there is all this brilliance peeking furtively out of the contrived fortress of a pretend-language. There is something phony about contrived language, because it is, well, phony. I didn’t like it when Uzodinma Iweala used it in Beasts of No Nation, and I certainly am dismayed that it ruined a brilliant opportunity in Harare North. Read this beauty of a sentence, reconstruct it in real prose and tell me why I shouldn’t mourn the loss of a dream novel: “Harare township is full of them stories about the misfortunes that people meet; they carry bags full of things and heads that is full of wonders of new life, hustle some passage to Harare North, turn up without notice at some relative’s door, only to have they dreams thrown back into they faces.” (p 5)

Chikwava taps brilliantly into the lode of indignities and humiliation that Africans endure inside Western embassies and then promptly loses it in the fog of contrived language: “…the British High Commission don’t just give visa to any native who think he can flag down jet plane jump on it and fly to Harare North, especially when they notice that people get them visitors’ visa and then on landing in London they do this style of claim asylum. So people is no getting that old consulate treatment: the person behind the counter window give you the severe look and ask you to bring more of this and that and throw back your papers, and before you even gather them together he have call up the next person.” (p 6) What is the purpose of this exercise?

Through the fog of artificial language, a picture emerges, of Chikwava deconstructing the method of African immigrants’ shame, and self-loathing. He explores social class stratification and tensions between the newly arrived (“native” Africans) and the veteran exiles (“lapsed” Africans) albeit in derogatory, stereotypical terms. The resulting self-loathing is emotionally violent as African immigrants recoil from anything that reminds them of their roots. The main character just coming in from Zimbabwe complains of rejection thus. “I have bring Paul and Sekai small bag of groundnuts from Zimbabwe; groundnuts that my aunt bring from she rural home. Sekai give the small bag one look and bin it right in front of me. She say I should never have been allow to bring them nuts into the country because maybe they carry disease. Then she go out and buy us some McDonald’s supper.” P (7) It is refreshing, the candor, he even touches upon gay life in Africa’s prisons, a subject that African writers have been loath to touch or explore even in the 21st century. Chikwava documents in exquisite detail the African immigrant’s willful determination to erase his or her African identity. The character Sekai, the “lapsed” African is always embarrassed by anything African. “I go out and sit at the doorstep and start to use screwdriver to pick off the mud that have cake under my boots from walking around outside. But Sekai follow me and ask me to look down on our street and tell she if I see anyone sitting on they doorstep? Me I don’t get the score what this is all about until she tell me that this is not township; I should stop embarrass them and start behaving like I am in England.” (p14)

Life in Zimbabwe and within the Zimbabwean immigrant community is the theatre of the absurd and Chikwava captures it in harrowing and comic detail. It is a tragicomedy and one never knows whether to laugh or to cry at this dark, intense, brilliant canvas: “Mother, she die of overdose. They carry she to hospital in wheelbarrow and she don’t come back. Then they take she body from the township and bury she in rural house under heap of red earth and rock. Now the spirit is still wandering in the wilderness because family squabbles end up preventing umbuyiso and this has not been done for years now.” (p16)

There is more where that came from: “Shingi sleeps in the lounge; he share the room with Farayi. Two mattresses is on rotting floorboards, blankets all over, small heaps of things telling one story of big journey that is caused by them dreams that start far away in them townships. I can sniff sniff them natives’ lives squatting under the low damp ceiling like thieves that have just been catch.” (p30)

If I seem to obsess mostly about the language, it is because I was distracted, distracted to drink, especially by sentences that Chikwava almost forgot to engineer into nonsense. “And then me I hear that people in the village where Mother is buried will be moved somewhere because government want to take over the area since emeralds have now been discovered there.” (p 17) The language gets in the way in a subversive manner and it as a result the book is torpedoed by an inane contrivance. Wise profound sayings, parables and proverbs become trite under the weight of linguistic engineering. And haunting prose is defaced by bad marketing decisions. But I must say, he is good, Chikwava, he can describe despair with a few deft strokes of the pen. “She take me to the kitchen and the air smell of bad cooking and the sink have one heap of dirty dishes and all. It’s like they lie there for donkey years. The ceiling on one corner is growing mushrooms and things.” (p 30)

Interestingly enough, as I read the book, I kept thinking of Ike Oguine’s A Squatter’s Tale, plotting how to rescue Chikwava’s tale from prose abuse. There is pretty prose in there, trapped in needless experimentation: “The glass slip off my hand and come crashing on the edge of the sink bowl; it break and fill the kitchen with the kind of fright that fill the room when you have break your mother’s bestest teapot.”  (p 31) Nice. Almost. Sometimes however it dissolves into malarial gibberish and you wonder: What is the purpose of this prattle: “You always know more than you believe in over what you know because what you know can be so big that sometimes it is useless weapon, you cannot wield it proper and, when you try, it can get your head out of gear and stop you focusing.” (p 43)

The book provides ample proof of autobiographical musings. It was probably not Chikwava’s intention to ridicule his heritage in which case it is a weakness of the narrative that he could be accused of creating racist stereotypes and spinning bigoted tales. A sensitive soul reading the book would balk at all these literary Sambos in black face and recoil from a Stepin Fetchit story that appears to have little redeeming value. I concede and celebrate Chikwava’s right of self expression but for me, the question is this: If this was written by a white person, would I be offended? The answer is a resounding yes. There are all these traces of bigotry and prejudice some aimed at gays and lesbians. We see the immigrant of color as a shiftless aimless buffoon. This is just one aspect of the immigrant life. Who tells the others? In addition, the story appears to be ridiculing, and making caricatures out of African traditional customs and values. The book succumbs to too much cynicism like too much stew on white rice. The result is aimless and purposeless, a story that goes nowhere. But then some would argue that Chikwava’s Zimbabwe is not going anywhere fast. Regardless, this is not the Zimbabwe of Petina Gappah’s elegant stories (Elegy for Easterly), or even of Dambudzo Marechera’s brilliant angst-ridden anthems. Should you read this book? Yes, read it, it is fun despite itself. I do miss Oguine’s A Squatter’s Tale. It is a better book. By far.

The Song of Exiles in the Serengeti: Poems by Awogbemila Temitope Ayodeji

Kunle Shittu
We use cookies to ensure that we give you the best experience on our website. If you continue to use this site we will assume that you are okay with it.Ok