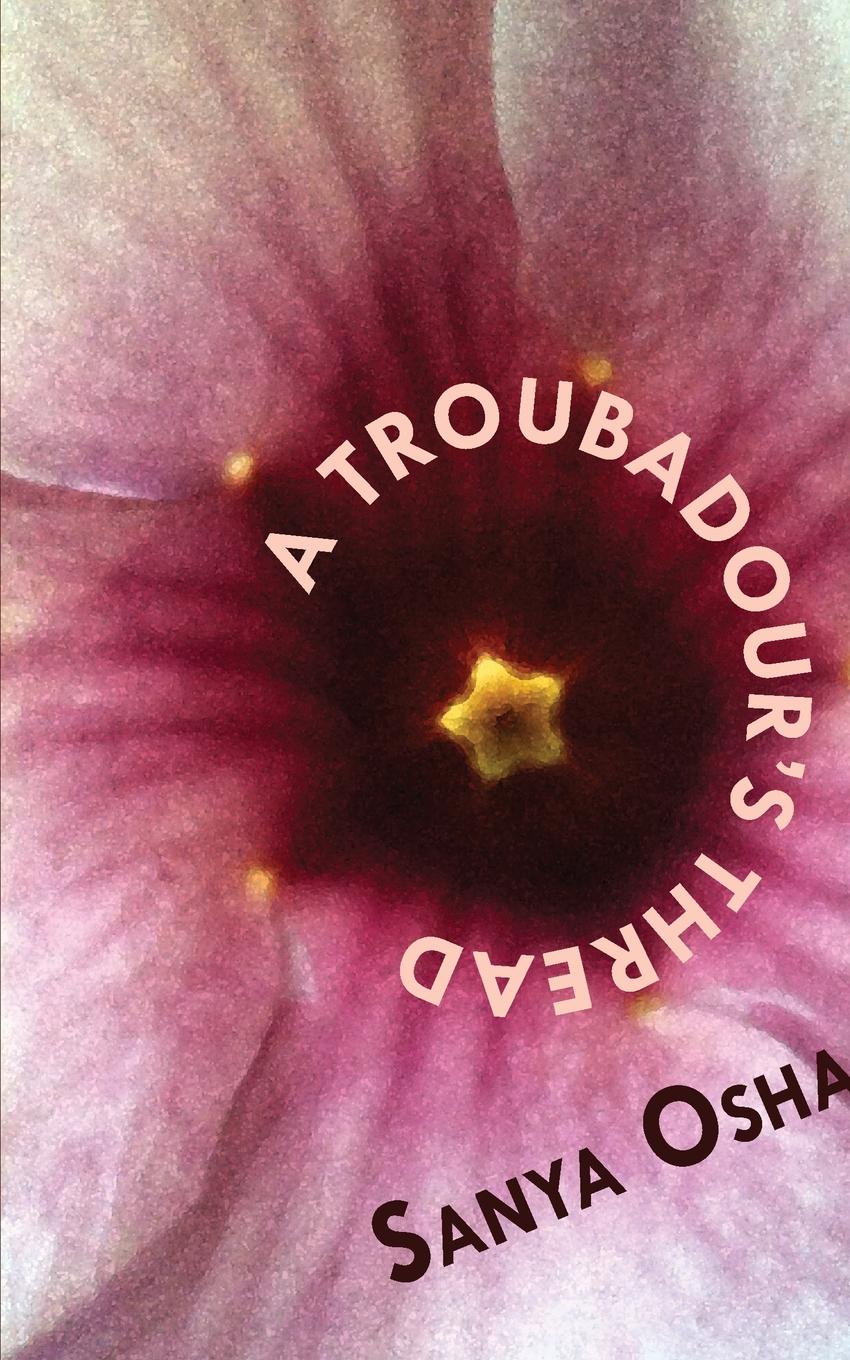 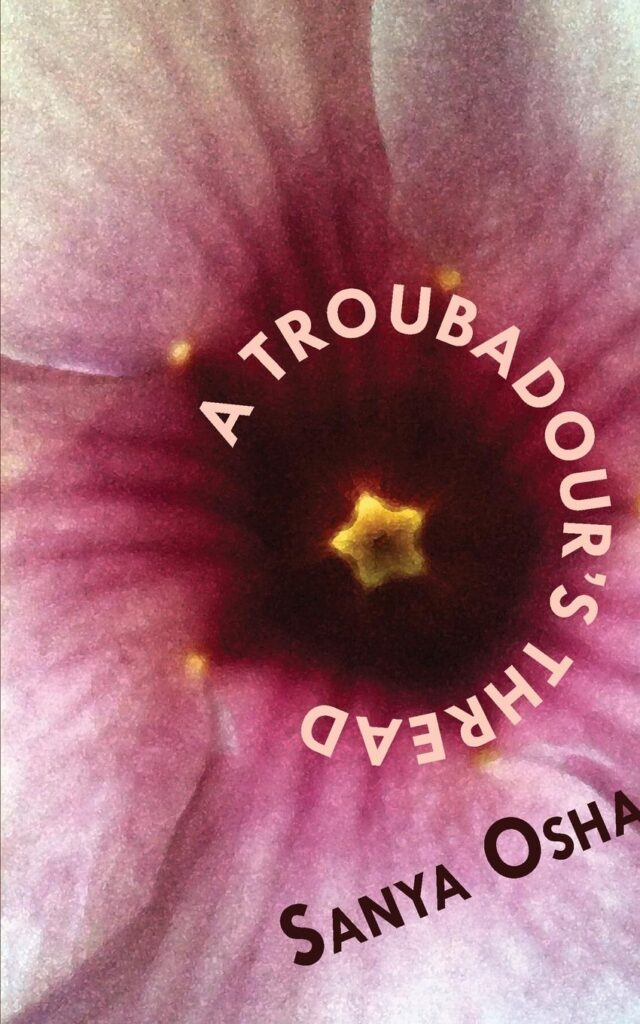 A troubadour’s Thread by Sanya Osha is short book consisting of one long poem. Broken into several stanzas of unequal length but similar shape, the form suggests a journey of several phases. When the poem opens the protagonist is well into his travels. The conjunction tells us he is not at the beginning of his quest:

I go from water to air/and back to water/slowly twisted by the night/until disturbed beyond all/I begin to wish an iron claw/Would drain all the blood.

The protagonist shifts shapes and transmutes from one state to another and so does everyone and everything around him. Osha presents a landscape that is difficult to negotiate. The highs and low of the protagonist’s quest is expressed through the environment. He seems to merge and melt with the elements:

To accompany him on this journey you require a level of determination. The writing is surefooted. You feel that the destination, though not predetermined, will be recognisable on arrival. Rhythmically it has its stops, starts, pauses, moments of observation and evaluation, descents into the unknown, hikes to mountain tops. But there is no lingering or meandering on this journey.

The landscape is full of apocalyptic images and opaque allegorical scenarios. With little mention of historical figures or contemporary politics, geographical locations, or known incidents, there are few signposts. We arrive at the pyramids at one point and meet Debussy at another but they offer little explanation. They are simply part of the landscape.

You have to let go of your want for the familiar. It is when you surrender yourself to the enigmas that you find yourself being led about by re-occurring symbols. There are many of them: ‘birds’, ‘a flute, ‘the dawn’, ‘wind’. There are chorus of characters with religious and other worldly significance – virgins, nuns, night-people, pilgrims. But the most potent symbol of all is ‘The night’. Through the Night the protagonist recognises his purpose. He says.

‘Nightly I stand convulsed with night/Hoping the sun would poison/The dark tumour at dawn.

And a few pages later he proclaims:

‘I have been called/To take night to the heart of a song/I have been given/The flesh of dead birds/To make a symphony of blackened diamonds.

As the allegory is not straightforward, the struggle to penetrate the dense images itself provides a way into the world on offer. Images doggedly embody the insecurity of this planet; its disintegration and trickery:

‘In front a host of guardian angels/Who would soon become serpents/The anchor leaves an anchorage/And within the shelves/That have served as our fortress/An ambiguous breeze/Waltzes away with our vein of sorrow.

The protagonist comes away from these happenings with a revelation of stoicism.

And it is was revealed/After a series of self-same deaths:/Bear the name of your tree/Like the soul clings to the body/Wear the trunk until bloodless/it speaks through your voice/Live in the name of the tree/To the lowest pit of shame.

If you were expecting Osha, as an African poet to comment directly on African history and politics you will be surprised. He looks at the human condition through a philosophical lens. If there is politics here, it is in the investigation of the climate, the elements and its impact on the relationships that unfolded in and through them.

You may not perceive the love story at the centre of this tale immediately. It could easily be mistaken for a nightmare. The relationship is as disorientating as the landscape. ‘She’ suddenly appears. So does ‘we’. ‘He’ replaces ‘I’ unannounced. There are no names. It is a relationship of violence and tenderness. There is a grappling between them for control or dominance. But mixed with it is their desire to save the other from the disillusionment they are experiencing of life. He and She are cruel in order to be kind:

Of her we read:

And when she came to know/That he had not killed/Everyone of his butterflies/ She began to undress/The body of his soul with her deepest eyes/With a generosity that betrayed/Her disillusionment/And then she took him to a ledge/So he could throw himself/Into the turmoil of the night/Until it drained him of all his insects.

Of him, we are told:

But it is not this relationship that leads the protagonist to the resolution of his quest. She withdraws from his passion and ardour and he continues his journey. The next phase is replete with images of atonement. It is a section that pulls all the symbolism into a thread. The landscape is more airy and vast. A river runs through it. The wind blows over mountains. The soul of the protagonist becomes resolute and steady in the face to turmoil. Is this the reward of his journey? The last lines:

…He begins/To stitch together with the charms/Of a night he had long discarded/ That those slain even when dead/Would no longer sink/In their own fetid tears.

The protagonist arrives at a point he is able to extend himself to others.

Osha’s poem is like one in the symbolist tradition of the 19th Century, a postmodern reworking. For those like me, it requires several readings before it yields up its gems. It took a while for me to accept that the frustration I was feeling was it’s narrative. Do not balk at the brevity of the book. Within these 22 pages there is more than enough to occupy your thinking and imagination.

‘Funmi Adewole is a dancer, dramaturge and poet based in London. Her volume of poems, 'Sea Salt in the City' was released in 2013.

Just Right: A Review of Keletso Mopai’s ‘If You Keep Digging’

Maik Nwosu: My Influences are a Collage of the Crossroads