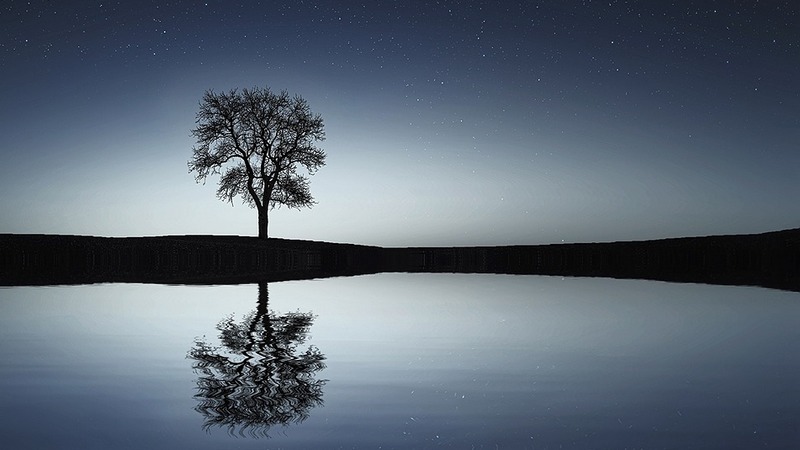 POND
(for my sister, Ambronese)

You know it was an evening not so
long ago when I was alone with my
thoughts. It had been a long day. Still
the telephone did not ring once. I
wondered where she was. What she
was doing. In her presence I always
felt self-conscious. Everything that
I did and said compared to her was
very much a minority report. The years
have transformed us both. We have
gone our separate ways. Put down roots
in different cities. Our childhood
house was an acute vulnerable nothing
of a nest. A hurt locker. Raised by a
mother who taught us to be tough girls
on the outside. Tough girls with the
call of the flux of melting snow and
butterflies made of light-hearted energy
on the inside of our souls.

She was an owl. Twigs for legs,
my foal. The shining landscape
she usually surveyed from the
window seat of an airplane. Phuket,
Thailand. India. Prague. New York. Florida.
Disneyworld. I am at a loss for
words. She was a tidal force in
my life. She’s a ghost to me. Pond.
Her ghostliness self like rock crystals.
Rose quartz. Though her vulnerability
is as private as a tree. I want to
Remind her by writing this that
I too was still a girl in some ways.
A woman in other words. Good
enough. Talented enough. I wanted
her to say that I made her proud.
There would be justice and honour
in her thinking that of me.

THOUGHTS WRITTEN AFTER READING A LETTER FROM A SISTER FROM PRAGUE
(for my parents, Gerda and Ambrose Senior)

You make me want to go on living
forever with your good news. I never
told you this before. Kept it to myself.
Never spoke with so much truth and tragedy
in my voice. Winging zero. Is this air,
this sunshine in our home country an
accident? Ladysmith Black Mambazo makes
me sing and dance. You make me want
to write and act. Love. Love most of all.
Yes, love too in this beautiful world.
In this Africa. This continent as ancient
as the Great War poets. I’ve discovered
the secret of time. The idea of your expression.
Chronic illness took me away from you.
Recovery life returned me to you, my sibling.
I know what desire is. Nothing. Nothing
hurts me where I find myself now.
My words are deliberate and haunting.
I am a work in progress. The zone that I am in is
passion. This exciting cog in the machine.

The rareness of stars and rain plunges me
into a mournful space. She lives like any
river does. The surface of her life is as rich
as the earth is with ochre. Nothing haunts
her. The voyage of hardship, wandering
despair. The images of the powerful moon
that controls the tides and the sun is burned
forever on my brain. My fury deep.
My speech silver. She makes me forget
about the dead world. The wintry bough
that touches the sunbeams of the blue
sky. In her presence my motives shrivel
and become as cold as her world. Her youth
is my youth. And like stars, her splendid
life must go on. Tidal. Branching out and
our elements of war must be abandoned.
She must go on living so I can go on living.
If that makes any sense at all to anyone
reading this. With tears in my eyes I write this.
I hope you read these words one day. Read
between the lines and remember to smile.

THE MANIC DEPRESSIVE DAUGHTER
(for my ‘Johannesburg’ family)

The furniture is there but it also isn’t there.
What I am seeing is not real. It’s
like the memory of water’s hiding
place inside a lake. Fire for eyes. Moth
wings for limbs. Milk flowing
through bones. All rage and sadness
standing at attention finding them
Instead of the fluid emptiness in a vessel. You are
my sun. All feelings shatter the sunset.
The dawn in ravishing intervals. You
have to see it the way that I see it. That
I am damaged. That the people I have
loved have damaged me. My face, the
Reflection in the bathroom mirror, is a
Museum. It speaks volumes. Grief is
like silence. It has its own soul. I only
had to learn how to love myself and

then all this sadness would end. Rage
would find the exit out. Some escape.
This voice within me has no ending, only
a beginning. You’re asleep so you don’t
remember. The stillness that came
after the hunger. The forest. The earth. Gravity.
Most of all the red path of the volcano.
Haunted, so the night swimming began
in earnest. I used water to trace vertebrae.
I praised asylum. I exalted the keys that came
with freedom. I was a fossil but knew
nothing of choice. I knew what touch
was and in the end longing for it almost
destroyed me. In the end I tried to live up to your
expectations.

THE WINTER RAIN OF JOHANNESBURG

I never had to think too much
of the deep sleep of the moon,
the sun, the stars’ ancient airs
and graces. When rain fell from
the sky. The blue reward of
the sky was usually very determined
to hold nothing back like a
fisherman’s net cast over that
ethereal element of seawater. Catching
fish came with the stormy perspective
of the day filled with thunder
and lightning. The sea’s vast
eternity. The flowers in the garden are
so clear with poise. The wind
is so polite. So parental. The stars swimming
in their own black river. The
skyline’s first instinct is to furiously
dissolve with every sunset.
Silence both threatening and
bewildering bouncing off the walls,
bending in the air, flexing its
fluid muscle. Silence is found
there at the end of the world
in an abyss. Our invincible conversations still haunt me. I
never had to think too much of the
deep sleep of the moon, the sun
and the stars’ airs and graces.
I remember her kindness. Her
beautiful, open face. She’s gone
but not forgotten. She left three
sons and a husband behind. Her
cancer is gone but not forgotten.
Her hair like black silk down
her back is gone but not forgotten.
Nothing complex, complicated
nor intellectual about her. This
salt of the earth woman with her
bright shining eyes marking me
for life and in the letting go
of it all came the lines of poetry.
Showing up at first all harsh on
the blue lines of the page. She’s up there now. Singing
with the angels. Riding the clouds.
Every silver lining her playground.
The only time I ever found
mysticism, faith and love in
one place was in poetry. In writing
about Jean and ‘her’ cancer.

The Whispering Trees: A Short Story by Abubakar Adam Ibrahim

We write what they like: Recent African literature and the political economy of prize-winning

Independence Day is Coitus Too: Fiction by Chikosolu Uzoka

Chikosolu Uzoka
We use cookies to ensure that we give you the best experience on our website. If you continue to use this site we will assume that you are okay with it.Ok