Of Blood and Sacrifice: A Review of Chris Anyokwu’s Blood Lines & Other Plays

“A serious writer,” says Chinua Achebe, “must look for an animal whose blood must match the power of his offering”. Writing, Achebe implies, is akin to sacrifice. To commemorate Nigeria’s one hundred turbulent years of nationhood, Anyokwu brings to the altar three plays, bound in a volume aptly entitled Blood Lines & Other Plays. In the African traditional religion, the task of the diviner is threefold. He begins by showing his caller the root of their problem, and expands the discourse by showing evidence of its existence, and then ends by pointing to the solution. Considered together, the three plays in this volume follow this divination pattern. 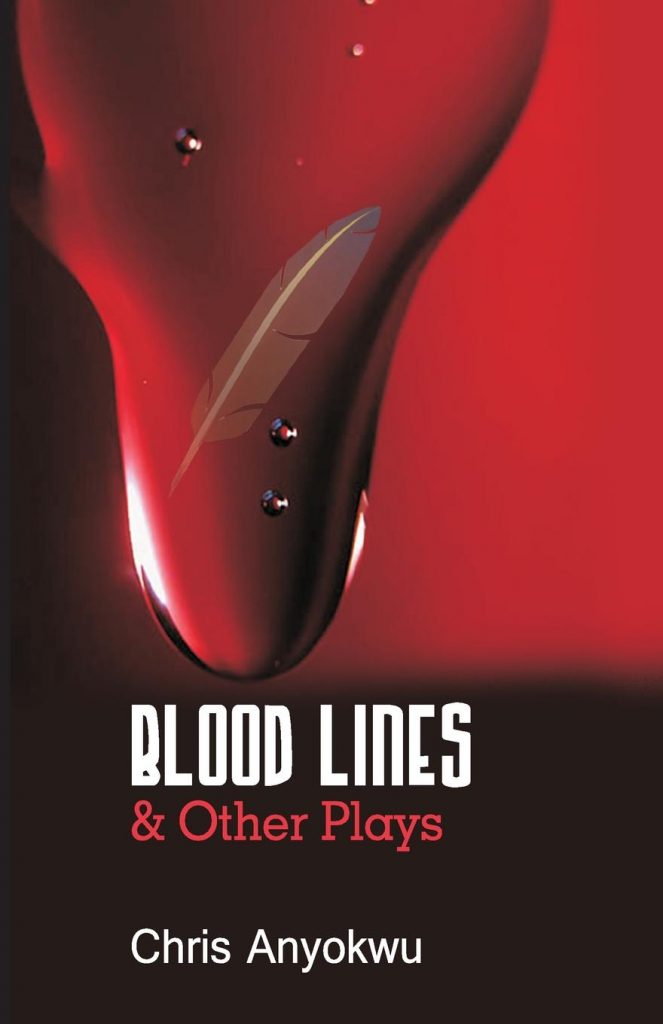 The first play, “Blood Lines” is a riddle on many counts. The major character, Chief Ogie, is a superbly educated banker who is about to be appointed Governor of the Central Bank. When the play opens, he is about to take a third wife, even though he is aware he suffers from an ailment that prevents him from making a woman pregnant. “The larger the better,” he tells his first wife, Atunne. He encourages all three of them to seek lovers outside his home – an arrangement that gives them several children. When it becomes apparent that his bid for the Central Bank job will be successful, he begins to receive text messages from unknown persons who claim they have “damning information” about his past and about the “arrangement”. Only then does he become worried. In his search for solution, he is led by his close friend and driver, Ehis, to a cult group where he is to learn that it is, in fact, Ehis, who is the father of all his children and originator of the text messages. The group, however, promises to help him secure the position of Central Bank Governor. The next scene shows Ogie in an elaborate ceremony. He has clinched the coveted position. We are told in the closing scene that at a second party in his city home, a mysterious fire broke out and destroyed all his possessions, leaving him in a sorry state, possibly paralysed.

If “Blood Lines” is concerned with a form of personal failing, the second play, “Citadel” explores a crisis of a more systemic nature. Dr David is a forward-looking university teacher whose passion for new ideas pits him against Professor Sogo, a senior member of his department. Where he prefers to inject elements of “Popular Culture” in his literature classes, Sogo favours the “Classics”. “You can take your kitchen-sink drama and prurient garbage elsewhere. You cannot practise your schizoid art here,” he yells at David. This hostile work environment encourages him to apply for fellowships overseas. He soon receives an offer from Germany which also allows him to travel with his family. But it is at that time that he suffers a breakdown. The closing scene shows him recovering remarkably at a psychiatrist’s, surrounded by his family. They speak of resuming their preparation for the travel, as the play ends on a note of hope.

But it is this hope – or, its more enduring form, salvation – that is the subject of the final play, “Facing Mount Ebo.” A deeply spiritual play, it dramatises the chaos that results when the past is divorced from the present. Many young men from the town of Akaba have strayed to the city and started the business of “cart-pushing”. One of them, Irorere, meets Eboigbe, a pastor, who preaches to him about Salvation at a road junction. They learn in the course of their conversation that they are from the neighbouring towns of Ogan and Akaba. The pastor, who was raised by his mother in the city, believes he comes from Ogan; he remembers, however, that his mother called Akaba “Ebo” which means “curse”. Irorere, meanwhile, suspects the pastor is, in fact, a native of Akaba: “For one thing,” he tells Eboigbe, “your accent…is exactly like mine… You might for all we know be an Akaba man. Like me.” A search for an answer takes them to Akaba. Here, Eboigbe learns that he was, indeed, born in Akaba. His mother had left with him for the city after his father, Ufoi, was unjustly killed by order of the king, nearly fifty years before. Before his death, however, he cursed Akaba and called it, “Ebo”. The play ends on a sombre, but celebratory, note: the curse is reversed, and members of the community begin again to experience peace and prosperity.

These plays, in very many ways, are a tribute to an ailing nation; a dramatisation of the steps needed for the nation’s recovery. When the first play opens, two village women bring the audience up to speed on developments in the community – a task which they undertake with much relish. They are to appear again and again in the course of the play for the same purpose. A congenial pair, they are graceful in their disagreements and are often quick to find a common ground. This peaceful, democratic, manner of viewing issues is indeed a part of the playwright’s vision of societal harmony. Chief Ogie’s home offers the antithesis. His chaotic personal life is seen as a direct consequence of his vaulting ego and greed. These women represent, then, the conscience of that society, the values for which it is known. They attend all Ogie’s weddings. “Each time I recall that event,” recounts the first woman, “my body trembles as though I’m the one who got married that day.” As Ogie soars, they celebrate him: “I know my man,” the first woman proclaims. When in the final scene, they appear to break the news of Ogie’s tragedy to the audience, they are downcast. While, therefore, they “burst into song and dance” as they exit the stage after their first appearance, the final scene shows them solemn, as if in mourning: “Let’s go home,” the second woman tells the first. “See, darkness is falling around us.”

The problem we encounter in the second play is a very present one. Dr David’s university is a society that desires change but is totally averse to it. “So you take the fun and leave the learning?” queries Professor Sogo. “Or put differently: you make the fun the learning? How do you move culture and society forward with your thematisation of fun?” It is this contempt for “fun” or change that stalls development, Anyokwu argues. But it does more: it wrecks the mind, and drives talents away.

It is also the playwright’s argument that there is a collective, ultimate, destination for the nation, and that for that transition to be possible, a kind of soul-searching must precede it. Like the Biblical Mount Sinai where Moses received the Ten Commandments, “Mount Ebo” is a place for answer, instruction and ultimately direction. For Pastor Eboigbe, it is even more instructive – it was a place once despised; he was raised to see it as a curse; but it is to become the place of his freedom. Ultimately, his story is reflective of the saying that the man who holds another to the ground also keeps himself from rising: it is only when the curse is broken that the pastor, whose father pronounced it, regains his freedom and is blessed with a child.

The audience will find the masterful use of Nigerian pidgin and urban colloquialism in many parts of the plays particularly refreshing – “Now we have fine-fine roads”; “…with money like san’ san’ flowing…”; “Do you want me to miss out on the wedding of the decade, with all the food, drink and all? Lai-lai, thank you very much”; “How about her ikebe? …Na helele, my sister”; “I swear to God who made me”; “Yes o my sister”; “And if it is a girl, your own don finish”; “So, no cause for control. Everything is under alarm”; “Are you a child that I should use all my mouth to say it?”; “You think it’s moinmoin?” “Like seriously?”; “Na IGG! Initial Gra-gra”; “the roforofo fight”.

A final observation concerns the playwright’s depiction of setting, culture and identity. Different local languages appear to collapse into one another – influences from Bini, Yoruba, Igbo, Ika, Itsekiri, and so on. Ogie speaks enthusiastically about “Ogbono, edikaikon, oha, ofe nsala, ewedu and gbegiri, and tuwon shinkafa”; and, somewhere in the interior parts of Bini, Ogie and his family speak of swearing an oath before Ogun, a Yoruba god. But much of the action in the entire drama is, indeed, set in Bini – a cultural melting pot, interspersed, as it is, by different ethnic groups. This multiculturality is emblematic of the country’s age-long struggle to achieve unity in the face of diversity.

These plays, then, are about closing barriers – filling gaps. “Blood Lines”, a compound often written as a single word, is here separated – a graphic representation of the past at odds with the present. The plays are restorative: attempts are made to find answers for the purpose of healing old wounds. Indeed, by the time the lights finally fade in the final play, a mandate has been secured for the collective future of a people.

Naza Amaeze Okoli is a PhD student and Teaching Assistant in the Department of English at the University of Mississippi. He is co-editor of Footmarks: Poems on One Hundred Years of Nigeria’s Nationhood. He tweets @nazaokoli.

A Review of Charles Akinsete’s ‘Do Not Preach To Me!’