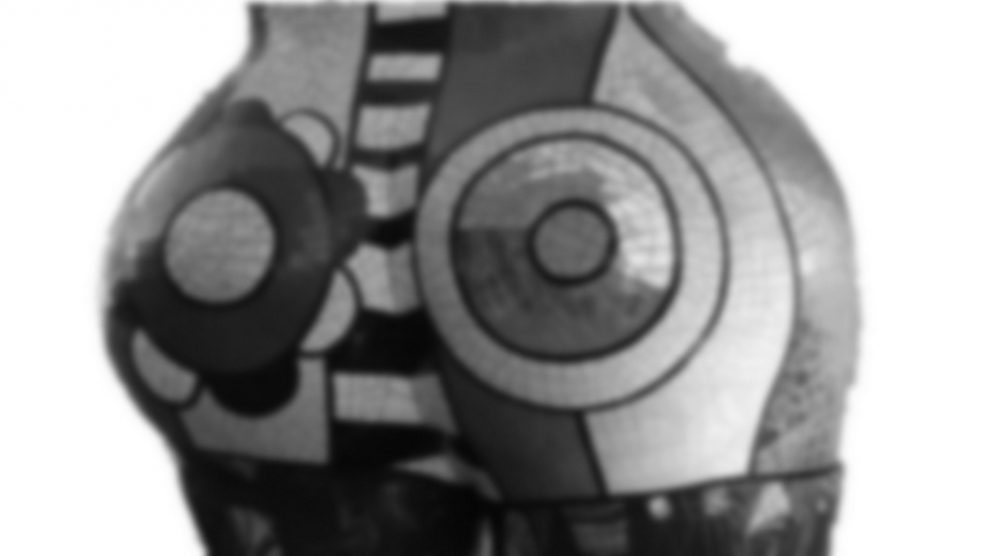 When Jessica passed the lit corridor of the building she lived, her pendulum buttocks followed seconds later. Above, the cracked ceilings revealed twisted cables covered in cobwebs and scurrying spiders. Outside, the sun was still suspended in the skies and the street was filled with blabbing hawkers.

Before she disappeared into her room, spread eyes peeked through torn curtains and blinked in admiration for the wiggling pair of lobes. When she entered her room, the owners of the eyes emerged from their dark rooms with arms folded across their hairy chests and heads nodding vigorously. Seconds later, the men shook each other’s hands and disappeared into their rooms, whistling at the miracle.

Jessica’s buttocks had not always been like this. When she was little, she had worried about her flat backside.

But as she grew into a pretty teenager, a new worry overwhelmed her. She had become possessed with a pair of buttocks the pestering boys in her secondary school nicknamed swing. All the boys desired to ride on her swing but she wasn’t willing. She only had eyes for Toby, the geek in her class. Alas! he wasn’t interested in anything without inscriptions.

Now an adult, she was aware of the blessing which blossomed behind her and she thanked her creator for the swinging miracle which stupefied men.

The men in the compound she lived had a new name for her protrusion. They called it V-booth.

Today, V-booth was suffocating in a pair of black jean. Her ample bosom pierced her black top which read, Milkshakes Versus the Boys in the Yard. Her complexion was the insides of a ripe pineapple and what she lacked in height was compensated with a curvaceous body.

She knew what her curves did to the men- both married and unmarried- living in No. 69 Garden Street and beyond. She always relished the thought the same way she relished 69, her favorite position.

But the men in No. 69 wouldn’t let her be. Not that they pestered her. They were lily-livered souls who wouldn’t dare. But they devised other means to enjoy what they would never have.

The first time she saw an eye in the porous keyhole of the door of the lone, makeshift bathroom in the compound while she took her bath, she screamed and bolted out of the bathroom believing she had seen a ghost.

The second time, she came out of the bathroom unannounced, determined to catch the ghost. She wrapped her blue towel which only covered her necessary private parts and got ready to emerge. She swung the door forward with force and the ghost collapsed to the ground. It turned out to be poor old Papa Adekunle. He recovered from the shock in slow motion and wobbled off, his thrusting hands struggling to insert his turgid penis into his unbuckled trouser.

His lust was obviously half quenched.

She later reported the incident to his obese wife in the evening when the woman returned from peddling fish and sat back to enjoy the ensuing fight between husband and wife.

She had lost count of peeping Toms caught in the act. They were always straining their eyes in the porous keyhole as if their lives depended on it. At first she had been embarrassed, but when she discovered the desperadoes were ready to be embarrassed than give up, she changed the lock after blinding numerous eyes with soapy water.

If she made a roll call, all the men in the compound were guilty of the act. Papa Adekunle, Papa Bomboy, Papa Ejima, Papa Bombay…and they were all married.

Now, No. 69 Garden Street comprised of twenty rooms and ten tenants. Each tenant boasted of two rooms. The landlord of the ramshackle building cared less. Despite the myriads of complaints from some tenants to his caretaker to renovate the building, he remained mute.

One evening, the landlord, a dark old man carrying a generous paunch, entered the premises unannounced with some muscled thugs and an impromptu meeting ensued. He asked the caretaker to reveal the complainants.

The poor man did and they scrambled to their feet. They were Papa Ejima and Papa Bombay.

That was when all hell broke loose.

Both men stared into the blank eyes of their landlord who stood up like a nouveau riche, rubbed his paunch and let out a guffaw which sounded opposite of what he had intended it to.

“So na una dey cause problem for my compound?”

Speechless Papa Ejima and Papa Bombay shivered like leaves in a storm. They never expected this scenario. They had mildly complained to the caretaker on behalf of other tenants. They were surprised that the rest of the tenants sat dumb.

Both men groveled at the feet of their landlord, begging for mercy, their eyes darting from the menacing face of the landlord to the advancing thugs flexing muscles and awaiting their benefactor to give the word.

“But Oga landlord, what they said is the truth. They may have said it disrespectfully but your house is in a bad state of repair.”

The landlord paused his swaying and looked at the owner of the feminine voice. Jessica was adorned in a green dress that accentuated her gorgeous body. He blinked at the ravishing sight before him and emitted a few stammers.

“I am also a tenant here. With all due respect Sir, you need to carry out repairs on your property so it will properly reflect your personality.”

The landlord’s countenance changed. His lips spread into a half moon, revealing kola nut stained teeth.

He turned to the men lying on the ground and addressed them.

“Shebi una see as person way get better home training dey use complain something. No be old idiots like una. Make una thank una lucky stars say this fine girl save una if not, I for show una pepper today.”

The thugs paused in their stride, exchanged glances and shrugged.

Both men mumbled their thanks and scrambled to their feet, brushing their dusty clothes with their feeble hands. Their docile eyes blinked tears of gratitude towards Jessica.

The landlord barked at the men who whimpered out of his sight. Without mincing words, he faced the rest of the tenants and addressed them.

“From now onwards, any complain una get make una meet this fine girl. Na she be my new caretaker.” The erstwhile caretaker’s face submerged in a scowl. It was obvious he hadn’t expected this impromptu termination.

The landlord turned towards Jessica, “My pikin wetin be your name?”

Jessica replied with a generous smile beaming her cheeks.

The landlord chortled. “Fine girl with a fine name. So from today, check all the necessary repair way them suppose do and then get back to me make we know how we fit do am.” As he spoke his roving eyes unclad Jessica’s dress and he adjusted his trouser a few times.

Jessica thanked him as the cowering tenants released a lousy round of applause. As he left the compound with his thugs, he beckoned Jessica. She wiggled towards him. As they disappeared from the compound, the men’s eyes, which had lost their initial timidity, shone with a new light as they marveled at the shaking wonder which now held them captive.

And that was how No. 69 Garden City Street eventually wore a new look and got a new landlady.